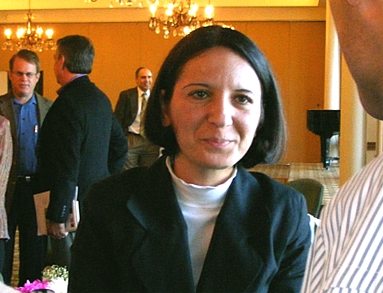 Sister Diana Momeka, OP, finally made it from Kurdistan to Congress to testify about the fate of the Nineveh Christians among whom she lived before ISIS invaded Mosul. No thanks are due to the State Department for her visit, though it’s not clear who exactly held State’s feet to the fire for their original refusal of her visit. Their “reasoning” , if you remember my first post on this story was based on an idiotic estimation that Sister Diana would use the occasion of a week’s visit to become an illegal alien. We should be so lucky, considering the numbers of sketchy individuals that very same State Department dumps into the United States by the thousands every year.

Pete Hoekstra has some information on the terrorists not only allowed in, but invited to meet the President at the White House. Obama appears never to have met a Muslim he didn’t like, yet he can’t find a Christian worth knowing:

The following three individuals are among the Who’s Who named in an upcoming report by the Investigative Project on Terrorism that exposes many of the uglier personalities allowed into the U.S.

That the administration initially refused a request by persecuted Iraqi Christian to visit the U.S. while seemingly at pains to accommodate enablers of 21st Century religiously motivated barbarity reeks of priorities perverted by politics.

One reason she’s not a threat to our immigration laws is that Sister Diana studied here in 2012; she lived and studied in Chicago. In May of that year, when she received her Doctor of Ministry degree from Chicago Theological Union, the other students chose her to be their speaker for the commencement address. Interestingly, their commencement ceremony was held in the oldest Jewish temple in Chicago.

In these paranoid times, it makes you wonder if Obama doesn’t go through these machinations just to prove his bona fides to the Muslim Brotherhood.

I reported her sponsors in an earlier post: The Institute for Global Engagement and the 21st Century Wilberforce Initiative. Since they are both Washington-based, one may presume it was their initiative which overcame the State Department’s knee-jerk refusal. Here is the full report by The Christian Newswire on her remarks to the House Foreign Service Committee. [The transcript below the video may differ from what she actually said; there is often a marked difference between what was prepared and what actually gets said as a witness.]:

Following her testimony, which appears below, Sister Diana noted that “The situation for my people and my country is grave, but not without hope. I believe that the international community, and especially the good people of the United States, want to see my government fulfill its responsibility to protect defend, and promote the welfare of all of its citizens. I call on all Americans to raise your voices on our behalf so that diplomacy and not genocide, social well-being and not weapons, and the desire for justice, not selfish interests determine the future for Iraq and all of her children.”

The text of Sister Diana’s speech:

Thank you Chairman Royce and distinguished Members of the Committee, for inviting me today to share my views on Ancient Communities Under Attack: ISIS’s War on Religious Minorities. I am Sister Diana Momeka of the Dominican Sisters of St. Catherine of Siena, Mosul, Iraq. I’d like to request that my complete testimony be entered in to the Record.

In November 2009, a bomb was detonated at our convent in Mosul. Five sisters were in the building at the time and they were lucky to have escaped unharmed. Our Prioress, Sister Maria Hanna, asked for protection from local civilian authorities but the pleas went unanswered. As such, she had no choice but to move us to Qaraqosh.

Then on June 10, 2014, the so-called Islamic State in Iraq and Syria or ISIS, invaded the Nineveh Plain, which is where Qaraqosh is located. Starting with the city of Mosul, ISIS overran one city and town after another, giving the Christians of the region three choices: 1.) convert to Islam, 2.) pay a tribute (Al-Jizya) to ISIS or 3.) leave their cities (like Mosul) with nothing more than the clothes on their back.

As this horror spread throughout the Nineveh Plain, by August 6, 2014, Nineveh was emptied of Christians, and sadly, for the first time since the seventh century AD, no church bells rang for Mass in the Plain of Nineveh.

From June 2014 forward, more than a hundred and twenty thousand (120,000+) people found themselves displaced and homeless in the Kurdistan Region of Iraq, leaving behind their heritage and all they had worked for over the centuries. This uprooting, this theft of everything that the Christians owned, displaced them body and soul, stripping away their humanity and dignity.

To add insult to injury, the initiatives and actions of both the Iraqi and Kurdish governments were at best modest and slow. Apart from allowing Christians to enter their region, the Kurdish government did not offer any aid either financial or material. I understand the great strain that these events have placed on Baghdad and Erbil however, it has been almost a year and Christian Iraqi citizens are still in dire need of help. Many people spent days and weeks in the streets before they found shelter in tents, schools and halls. Thankfully, the Church in the Kurdistan region stepped forward and cared for the displaced Christians, doing her very best to handle the disaster. Church buildings were opened to accommodate the people; food and non-food items were provided to meet the immediate needs of the people; and medical health services were also provided. Moreover, the Church put out a call and many humanitarian organizations answered with aid for the thousands of people in need.

Presently, we are grateful for what has been done, with most people now sheltered in small prefabricated containers or some homes. Though better than living on the street or in an abandoned building, these small units are few in number and are crowded with three families, each with multiple people, often accommodated in one unit. This of course increases tensions and conflict, even within the same family.

There are many who say “Why don’t the Christians just leave Iraq and move to another country and be done with it?” To this question we would respond, “Why should we leave our country — what have we done?”

The Christians of Iraq are the first people of the land. You read about us in the Old Testament of the Bible. Christianity came to Iraq from the very earliest days through the preaching and witness of St Thomas and others of the Apostles and Church Elders.

But the current persecution that our community is facing is the most brutal in our history. Not only have we been robbed of our homes, property and land, but our heritage is being destroyed as well. ISIS has been and continues to demolish and bomb our churches, cultural artifacts and sacred places like Mar Behnam and Sara, a fourth century monastery and St. Georges Monastery in Mosul.

Uprooted and forcefully displaced, we have realized that ISIS’ plan is to evacuate the land of Christians and wipe the earth clean of any evidence that we ever existed. This is cultural and human genocide. The only Christians that remain in the Plain of Nineveh are those who are held as hostages.

The loss of the Christian Community from the Plain of Nineveh has placed the whole region on the edge of a terrible catastrophe. Christians have for centuries been the bridge that connects Eastern and Western cultures. Destroying this bridge will leave an isolated, inculturated conflict zone emptied of cultural and religious diversity. Through our presence as Christians, we’re called to be a force for good, for peace, for connection between cultures.

To restore, repair and rebuild the Christian community in Iraq, the following needs are urgent:

I am but one, small person — a victim myself of ISIS and all of its brutality. Coming here has been difficult for me — as a religious sister I am not comfortable with the media and so much attention. But I am here, and I am here to ask you, to implore you for the sake of our common humanity, to help us. Stand with us as we, as Christians, have stood with all the people of the world and help us. We want nothing more than to go back to our lives; we want nothing more than to go home.

Thank you and God bless you.

5 thoughts on “Sister Diana’s Testimony Before Congress — at Last”