Last week four Counterjihad activists representing various NGOs attended two days of an OSCE/ODIHR (Organization for Security and Co-operation in Europe/Office for Democratic Institutions and Human Rights) conference in Vienna. Below is an overview of the event written by one of the participants.

A human rights organisation falling off the cliff

At the imperial castle Hofburg in Vienna, Austria, the Organisation for Security and Cooperation in Europe (OSCE) hosted a conference named “Security Days” about dialogue and bridge-building as tools to prevent radicalization and terrorism. A series of high level international organisations participated, including the Anna Lindh Foundation, the foreign ministries of the United States, Egypt and Turkey, the Organisation for Islamic Cooperation (OIC), the UN organisation Alliance of Civilisations, and the Saudi-sponsored center for dialogue KAICIID. But despite the fancy surroundings and the high level participants, the result was disappointing.

Can the truth constitute “Hate speech”?

On the first evening of the conference, there was a “Night Owl” session about how to deal with the new media, and in particular how to ensure that they cannot be used to radicalize and recruit terrorists. Also discussed was the difficulties of reconciling freedom of expression with the desire for security. The contributions from the panelists and the first rounds of discussion constituted mostly of friendly yet non-committal comments about the new media, and the fascinating fact that anyone can now publish whatever he finds meaningful with a click of the button, and consequently how to deal with “hate speech” and other unpleasant content.

Have we investigated what our enemies say?

Friday featured four major sessions. The first topic was the identification of the root causes of radicalization, and how to convince the public that no religion (in practical terms, that means Islam) must be held responsible for the increasing terrorist threat. Panel members stressed the importance of not calling the Islamic State the “Islamic State”, for doing so could give the impression that Islam motivates people to war, terrorism and other crimes.

The audience challenged the panel for talking away from the real problem. One suggestion was to map the stated motivations of the terrorists, in order that we might attack terrorism on the level of ideology. The panel reacted by mentioning cases where terrorists had complained about feeling marginalized by society, but did not discuss the proposal in itself. 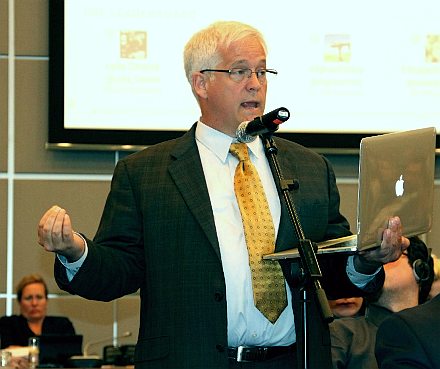 Should education be based on facts?

A recurring theme was that international organisations (such as OSCE) should be more active in directing education of the coming generations, in order that they understand the principle of universal human rights, with the implicit assumption that they will then abstain from terrorism. The words “bridge-building” were used repeatedly, despite the fact that large number of Europeans are sincerely weary of the bridges built thus far and the problems they bring. 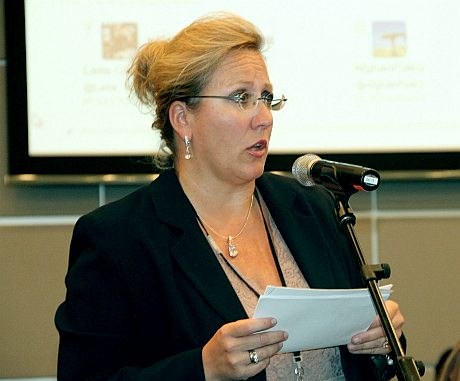 The audience was quite clearly dissatisfied with the non-committal comments from the panel members. One audience member proposed that any such education guidelines should be based on what Islamists themselves say about their ideology. An example brought forth was that the Al-Azhar Islamic university in Egypt has stated that they do not consider Islamic State to be un-Islamic. Another audience member encouraged Turkey to stop the institutional denial of the Armenian Genocide, in order that the truth might become widely known. Again, the panel gave vague and unclear responses.

And what about equal rights for women?

After a delicious buffet brunch, discussion continued to the need for increased participation by women and the young. A woman from Afghanistan related how it became possible for a significant number of women to participate in the country’s large legislative assembly. Then there was no elaboration on how more female and young participants would materially improve our security.

As in the previous sessions, it was remarkable how few hard facts were presented. One audience member inquired if any systematic surveys had been conducted about Islamic leaders and their attitude to equal rights for women. In addition she asked if the position of women under Sharia law is not a severe problem that requires addressing. A panel member responded that Sharia is a tradition, not a fixed system, and that women are valued highly in Islam.

In the closing session, one audience member proposed that efforts should be initiated to convince Islamic leaders to respect human rights, so they would stop radicalizing people to become terrorists. For if Islam really does not have anything to do with terrorism, it should be easy to show imams and other Islamic scholars their misunderstandings of Islam.

Another suggestion put to the panel was to confront and close extremist Islamic organisations directly, in order to put an end to their radicalization of Muslims. The European Council for Fatwa and Research was mentioned as an obvious example, for on the previous day, May 20th, they had reiterated that according to Islamic law, persons leaving Islam should be killed.

These practical proposals were not given serious consideration by the panel.

The apparent ignorance, and in some cases obviously contrafactual statements, caused an American expert to ask: didn’t the panel members, given their elevated positions in a variety of international organisations, had a professional duty to know this material, and base their work on such knowledge?

Eventually, the panel gave up even pretending to respond to the challenging questions. They held a series of additional monologues with little relevance to what the audience had asked about, until no time was left to address them.

The OSCE, which in its time contributed significantly to the peaceful collapse of the Soviet Union, does not seem able and willing to use human rights as a serious weapon in the battle against the ideology of Islamists and terrorists.

All photos were taken by Henrik Ræder Clausen.

6 thoughts on “OSCE in Free Fall”