JLH has translated an article from Politically Incorrect about an essay by Oliver Jeges in Die Welt. The PI article included excerpts from the Jeges essay, but instead of including those, the translator has appended the entire piece after the text from PI. 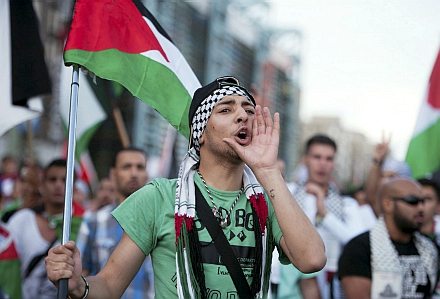 (Photo caption: “A young Palestinian in Berlin demonstrates against Israel”)

Why Do Muslims Not Demonstrate When Muslims Are Killing Muslims?

Today WELT-online published the outstanding commentary: “Are Muslims really Incapable of Self-Criticism?” The author is Oliver Jeges, the son of an Austrian mother and an Egyptian father. He emphasizes the absolute necessity of criticism of Islam, and faults the West for exculpating this “religion” of its responsibility for terrorism. “Current opinion in Europe decrees that terrorism in the name of Islam is not connected to Islam. That is as absurd as maintaining that religious wars have nothing to do with religion.” We are drawing ever closer to public discussion of the heart of the matter.

The author, a graduate of the Axel Springer Academy, also addresses the ironclad cohesion of the Ummah — the worldwide community of all Muslims. They are demonstrating everywhere for their co-religionists in Gaza:

Another important point is that Muslims never see themselves as the perpetrators, but only as the pitiable victims:

To come to the point, here is the whole article in WELT:

Are Muslims Really Incapable of Self-Criticism?

Nine years have gone by since several cartoons almost unleashed World War III. On September 30, 2005, the Danish daily newspaper Jyllands-Posten published 12 small caricatures on one page, which, among other things, depicted the Prophet Mohammed as a terrorist.

The best-known drawing was a full-bearded face with a bomb as a turban. It was by Kurt Westergaard — seventy years old at the time — who has since then been under police protection and only just escaped assassination in his own house by fleeing into a panic room built for that purpose.

Far more horrifying than this close shave is the fury which exploded all over the Islamic world because of these twelve drawings. For many Muslims, the satiric representation of their religion’s founder was a cue for unreasoning hatred and uncontrolled violence. Danish embassies in Islamic countries were stormed and their diplomats expelled.

Streets from Jakarta to London were the scene of violent riots, for the one and only reason that Muslims felt provoked and their honor wounded. As a result of the worldwide protests, 139 people were killed and 800 seriously injured. There were similar upsurges of violence after the announced Koran burnings by American preacher Terry Jones, as well as at the opening of the low-budget, Islam-critical film, “Innocence of Muslims.”

How is that proportional?

The impression that arises in the world because of this is devastating. There are protests in the Islamic world and in Arab communities only when Muslims are the victims of the West, America or the “Zionists.” But if Muslims are the perpetrators, there is silence.

For instance, when Israel insists on its right of self-defense after months of Hamas rocket attacks, there is a wave of protests throughout the Islamic world. On the other hand, when a terrorist militia like IS (formerly ISIS) terrorizes half of the Levant, bestially slaughtering Shi’ites as well as Sunnis and destroying sacred places, it seldom occurs to Muslims to raise their voices in protest.

“Muslims do not murder” — Come again?

Presently, it is possible to see one demonstration after another in European cities, demanding “Free Gaza from Israel.” These demonstrations are not only home to the new anti-Semitic wave. Curiously, IS and Hamas banners are also being waved there, and none of the participants thinks of objecting.

It is not just Palestinian exiles who want to call attention to the situation in their homeland. Turks, Lebanese, Egyptians, Syrians and Iraqis are chanting for their “brothers in Palestine.” That is as if Finns, Poles and Italians were campaigning for the planned separation of Scotland from Great Britain.

But a Turk or Moroccan has about as much to do with Gaza as a Scandinavian has to do with the Commonwealth. Of course, Christians, Europeans and atheists demonstrate for Gaza because they are concerned about the tragic fate of he Palestinians. But you could ask why the pot always boils when Muslims are the target of a third party, but not when Muslims are the victims of Muslims.

Several days ago a German student of Arab extraction wrote to express his displeasure. His had seen that I wrote an article about Muslim fanatics. In three words, he summarized the message of his victim status: “Muslims do not murder.”

Terror in the name of Islam

That is an attitude encountered time and again among Muslims. Turkey denies the genocide conducted by the Ottomans against the Armenians. 9/11 is — take your choice — a plot by “global Jewry” or an inside job by the Americans. The IS is being guided by the “Zionists.” Osama bin Laden was a CIA agent. Boko Haram are not “real Muslims.” And all the assassinations from Madrid to Bali have nothing to do with “true Islam.”

It’s the others who are guilty. Only one thing cannot be: that a Muslim does anything bad. Apparently, because what is not allowed, cannot happen.

And when the Islamic world closes its eyes to something, that makes it easier for the West to relativize. Current opinion in Europe is: terrorism in the name of Islam has nothing to do with Islam.

That is as absurd as maintaining that religious wars have nothing to do with religion. Of course Islamist motivated violence has to do with Islam. And only Allah knows whether it is the correct or the false interpretation of the Koran.

Muslims should drop their victim mentality

Naturally not all Muslims are prone to violence. The overwhelming majority are peaceful — peaceful but, unfortunately too often mute. That is to say, just because you don’t want to have anything to do with Islamism, that does not mean you may not undertake anything in opposition to it.

So long as Free Gaza demonstrations are not accompanied by Free Syria and Iraq from IS demonstrations, where Muslims discard their victim psychology, the necessary criticism of Islam will not abate, but will increase.

Salman Rushdie, on whom a death fatwa was laid by Ayatollah Khomeini after publication of his novel The Satanic Verses, wrote an essay in the New York Times shortly after 9/11:

Under the provocative title, “Yes this is about Islam,” Rushdie described Islam as an ideology which consistently blames external factors for all the problems in Muslim societies. A culture incapable of self-reflection. Not willing to battle the evil in its own ranks.

It is time for Muslims to lift the veil.

Last published by the author: Generation Maybe (Haffmann and Tolkemitt).

7 thoughts on “Time to Lift the Veil”