Fjordman’s latest essay has been published at FrontPage Mag. Some excerpts are below:

Ceuta is one of two small Spanish enclaves in North Africa, the second being Melilla. They provide the only possible entry to European territory without leaving Africa. Ceuta is separated from the Iberian Peninsula by the Strait of Gibraltar, and lies at the strategically important boundary between the Mediterranean Sea and the Atlantic Ocean. 1300 years ago, Muslims used it as a staging ground for their invasion of the Iberian Peninsula and their aggressive inroads into Europe. The tide took centuries to turn, but in 1415 the Portuguese conquered Ceuta. This event marked the beginning of half a millennium of European dynamism and global expansion.

It is ironic that Ceuta is now once again at the front lines. This time we are witnessing the retreat and decline of Europe, and the demographic expansion of Africa and the Islamic world. As one member of Spain’s maritime rescue services commented in late 2013: “ It has been a very busy summer, because we’re now also rescuing Africans who not only cross in a toy boat but haven’t even spent money on buying proper oars.”

Apart from scaling the fences at Ceuta and Melilla, other common routes into Europe are by boat, sometimes via Spain’s Canary Islands off the Atlantic coast of North Africa, but more frequently to Mediterranean islands such as Italy’s Lampedusa. Some also enter Europe from the east, via the Greek islands. Greece has a huge problem with illegal immigrants, many of them Muslims coming from as far east as Afghanistan. 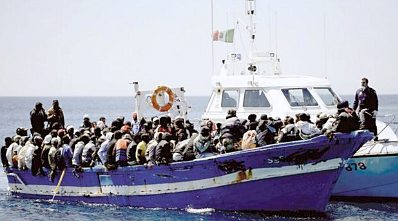 The tiny island of Malta, which is a member of the EU, has already received tens of thousands of illegal immigrants coming in by boat. Many of the arrivals hail from the poorest and most war-torn parts of sub-Saharan Africa. Their arrival constitutes a heavy burden for such a small nation.

On February 6 2014, at least 14 illegal immigrants, most of them sub-Saharan Africans, died while trying to swim from Morocco to the Spanish enclave of Ceuta. The Spanish government’s local delegate said that the migrants were “aggressive” and began throwing rocks. Civil Guard officials used anti-riot gear to dissuade them from rushing the border, yet about 200 attempted to swim around the seawall. Sources said that the migrants stampeded, some stepping on others on the beach, as they jumped into the sea. Authorities said the police in Ceuta used rubber bullets to ward them off, but that they fired them in the air and did not target anyone directly. “ We did not use anti-riot equipment when the immigrants were in the water.”

Meanwhile, the number of illegal immigrants landing in Italy rose tenfold in January 2014, the country’s deputy interior minister said. “ In 2013, Italy was subjected to an incessant and massive influx of migrants from North Africa and the Middle East,” Filippo Bubico told parliament. Throughout 2013, a total of 2,925 vessels of various shapes and sizes landed on Italian shores, carrying about 43,000 people. This represented a rise of 325 per cent in just one year. Reality is increasingly imitating fiction, with boatloads of people coming from the south to Europe, just as described in Jean Raspail’s novel The Camp of the Saints from 1973.

In early February 2014, more than 1,000 migrants trying to cross the Mediterranean in nine overcrowded rafts and dinghies were rescued by the Italian navy within the space of just 24 hours. The vessels, in which approximately 1,120 people were packed tightly, were first spotted in waters south of Sicily by Italian military helicopters attached to naval ships. Once reached by naval patrol vessels, the migrants were given life jackets and transferred to a larger ship. It is thought they were trying to reach Lampedusa, Italy’s southernmost island. The turmoil in the Middle East in the wake of the Arab Spring, the civil war in Syria and instability in Africa has led to a sharp increase in the number of illegal immigrants trying to reach European shores.

The German professor of sociology Gunnar Heinsohn worries about the “demographic capitulation” of European nations. He fears that their low birth rates will lead to the collapse of the welfare state. Immigration from Third World nations cannot solve this problem; it only makes it worse. He does not believe that material aid to countries with large youth populations will prevent violence and terror. On the contrary, it may fuel more unrest. Over the course of five generations (1900-2000), the population in predominantly Muslim countries grew from 150 million to 1200 million — an increase of 800 per cent. This growth still continues. Heinsohn notes that Western countries are funding the Palestinian population explosion, for instance. He thinks that we must cease this support. He also believes that the West should stay out of the affairs of Muslim countries with expanding populations as much as possible. We should only interfere briefly if they threaten us directly.

5 thoughts on “Fjordman: The Folly of Open Borders”