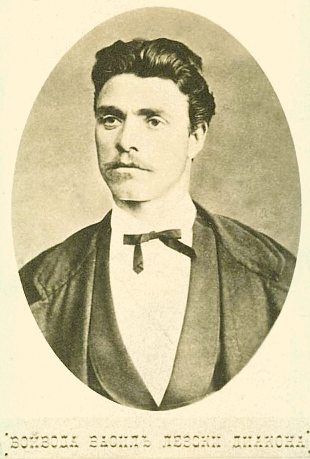 As reported here in several earlier articles (see the bottom of this post for the links), a demonstration against a mosque broke out last Friday in the Bulgarian city of Plovdiv. One of the issues that enraged the demonstrators was the reopening of a mosque in Karlovo almost across the street from the birthplace of Vasil Levski, the great hero of Bulgarian independence. Levski gave his life for the cause in 1873, when he was hanged by the Turks.

By coincidence, today (February 19) is celebrated as the 141st anniversary of the death of Vasil Ivanov Kunchev, more commonly known as Vasil Levski, or “Vasil the Lionlike”. February 18 was the actual date of his death, but in one of those Julian/Gregorian calendar misalignments, the traditional date for the commemoration has become February 19.

Bulgaria commemorates on Wednesday the 141st anniversary of the death of its national hero, freedom-fighter and revolutionary Vasil Levski.

Vasil Ivanov Kunchev (better known as Vasil Levski), was sentenced to death by an Ottoman court and hanged in Sofia on February 18 (February 6 old style), 1873.

Bulgaria honors the national hero on February 19th, despite him being hung on the 18th. The Bulgarian Academy of Sciences explains that this discrepancy is due to an old technical error that has not been corrected in history books.

Memorial services for Levski are taking place around the country, as people pay tribute to the hero at his numerous monuments, including the Levski Memorial in downtown Sofia.

A memorial will be held at 6 pm before the monument of Vasil Levski in downtown Sofia, at the spot where he was hung. The service will be attended by the President Rosen Plevneliev.

Levski was born in 1837 in Karlovo. He went on to become the leader of Bulgaria’s revolutionary movement for liberation from the Ottoman Empire.

Initially preparing to become an Orthodox monk, Kunchev gave this up in order to dedicate his life to fighting for Bulgaria’s freedom.

During his participation in the First Bulgarian Legion in Belgrade, Serbia, in 1862, he received the nickname “Levski” (Lionlike).

After organizing the revolutionary movement all across Bulgaria for several years, Levski was captured by the Ottoman Turkish police in late 1872, and was sentenced to death by hanging for his revolutionary activity.

His progressive political ideas envisaged a Bulgarian republic based on the fundamental rights of everyone, abiding by democratic principles and based on religious and ethnic equality.

For his self-sacrifice and sublime ideas, Levski has been dubbed “the Apostle of Freedom” by Bulgarians.

Media articles identified the most inflammatory demonstrators in Plovdiv as “football hooligans”. The local soccer club in Plovdiv has hastened to disassociate itself from any anti-Turkish or anti-Muslim sentiments exhibited by its supporters. According to The Sofia Globe:

Representatives of the two major football team supporters’ clubs in Plovdiv have offered to pay for the costs of the damage to the historic Dzhumaya Mosque in the city, which was targeted during an anti-Islamic march on February 14. In this way, the fan clubs want to distance themselves from the vandalisation of the mosque, which they say was the work of “provocateurs”.

Previous posts about the protest in Plovdiv:

5 thoughts on “Vasil the Lionlike”