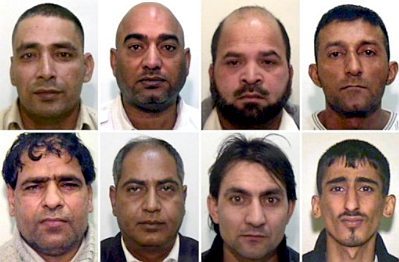 The epidemic of “grooming and pimping” gangs — which, as Vlad has often pointed out, are more accurately described as “sex-slavery rings” — is predominantly a European phenomenon. The plague is spreading, however, and is now being recognized in the United States, Canada, and Australia.

An article by Sonia Bailley today at The American Thinker tells the story:

Muslim groups around the world are crying Islamophobia and playing the victim card as horrific Islamic-motivated crimes, such as grooming and rape-gangs, rage on with impunity throughout the Western world, especially in Europe. Rape or grooming gangs, which are almost entirely Muslim, are committing a crime that is religiously mandated in Islamic doctrine.

Muslim grooming gangs have been operating unchallenged in Europe for over 20 years, especially in the UK, Holland, Sweden, Norway, Belgium, and France. These widespread and highly organized gangs continue to rape and pimp non-Muslim underage schoolgirls who are used as sex slaves and sometimes tortured or killed. Just recently, in mid-2013, British police arrested 45 mostly Muslim men (mainly Pakistani and Bangladeshi) in West Yorkshire belonging to the largest grooming gang uncovered in the UK.

Throughout Europe, gang members are being described as “Asians”, and not Muslim. Governments, police forces, social services, childcare agencies, the mainstream media, and even academics fear being falsely accused by leftists and Muslim groups of Islamophobia or “racism” if they were to publicly identify the gangs as Muslim. In Britain, a detailed and comprehensive report will be issued next year illustrating the failure of the government to stop Muslim grooming gangs.

No country with a Muslim population is immune to grooming gangs. America is on the same path as Europe and trailing not too far behind. In fact, Muslim grooming gangs (mainly Somali) have already found their way to the streets of America. These gangs have been operating for over 10 years in Minnesota, Tennessee, Michigan, and Ohio. The largest grooming case in U.S. history was from Somali immigrant communities in Minneapolis (MN) and Nashville (TN), in which 29 Somali Muslims were indicted in 2010 for kidnapping, raping, and selling underage girls between 2000 and 2010.

Canada and Australia are also seeing their fair share of Muslim grooming gangs. But as with Europe, government agencies assume the politically-correct approach in insisting that Islam has nothing to do with this crime, and the mainstream media fails to report these gang members as being mainly Muslim. In doing so, the rape and exploitation of thousands more vulnerable schoolgirls are being facilitated. Also, many Muslim gang-rapes go unreported because the victims are too scared or embarrassed to report these crimes.

Why is this horrific global crime of child grooming a phenomenon that occurs mainly amongst Muslim immigrants from Islamic countries?

As it turns out, this crime is religiously and politically motivated by Islamic doctrine, which calls for the capturing, raping, and prostituting of non-Muslim women and children after battle, as well as keeping or selling them as sex slaves. Mohammed himself was a slave-owner, and had sex slaves whom he captured in battle. He advised his male followers to imitate his example. In Islam, everything that Mohammed did must be emulated, as he is considered to be the exemplary leader, the perfect man.

Is it any wonder why many Muslims see nothing wrong with grooming or possessing sex slaves? Nor do they see anything immoral or illegal in committing other Islamic-motivated crimes, such as honour killing, female genital mutilation, mosque preachings that nourish homegrown terrorists, street prayer that blocks public streets, street killing of non-Muslims, suicide bombing or martyrdom, as well as homophobia and Jew-hatred.

All these acts are religiously mandated in the Koran and other Islamic doctrines that include the most venerated and reliable legal text Reliance of the Traveller. All acts are instances of Islamic or sharia law in action. There is no revulsion, shame, or guilt involved on the part of the perpetrator, because these actions are entirely acceptable and encouraged in Islam. They run contrary to Western culture, and go beyond merely disrupting the society’s public order and public peace that are essential for any civilized nation to survive.

Sharia acts such as grooming are part of a wider strategy to subjugate and destroy western civilization from within, and to establish Islam as the dominant world power. This is referred to as a “civilization-jihadist process” in the Muslim Brotherhood’s 1987 Memorandum on the General Strategic Goal for the Brotherhood in North America. Subjugation of non-Muslims is what Mohammed intended when he ordered Muslims in Medina not to integrate into society after immigrating to their new place, but to form a separate body, to keep their own laws, and to make the host country comply with them. Immigration, too, is a religious obligation to expand Islam into new territories and establish its supremacy over all other religions through the enforcement of sharia acts on the host society.

Read the rest at The American Thinker.

17 thoughts on “Grooming Gangs and Sharia”