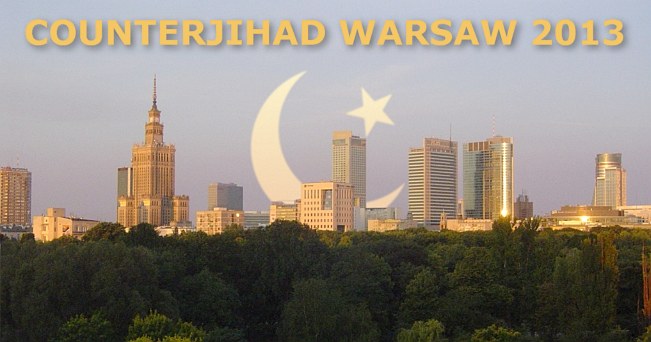 The seventh annual Counterjihad Conference convened in Warsaw last week. The meeting broke new ground in two respects: it was the first held in a city outside of Western Europe, and it was the first time it had to be scheduled in the interstices of another conference, the OSCE Human Dimension Implementation Meeting (which has been, and will be, reported in detail in other posts).

A fair number of old hands from previous Counterjihad conferences were present for the OSCE events, so we decided to convene for two evenings when no other major obligations interfered. The OSCE and CJ groups overlapped, but were not identical: not all the OSCE participants among our allies are involved in the Counterjihad, and some who did not participate in OSCE traveled to Warsaw to meet with their allies in the European Counterjihad. Fjordman, for example, visited the city to meet with his friends and tour Warsaw while most of the rest of us toiled and sweated in the plenary at the OSCE conference.

One of the primary purposes of these annual gatherings is to help like-minded groups touch base with one another, both internationally and within individual countries. With the media in near lock-step against what we do, and most governments in collusion with the Islamic intruders, many anti-Shariah organizations feel isolated and alone. Demoralization due to isolation is a recurring problem, and meeting with other groups from time to time helps break that sense of isolation. People discover that other groups sharing similar goals face the same problems. Making new contacts not only breaches the sense of isolation, it also allows organizations to share resources and divide up the labor, so that each becomes more effective and efficient.

Topics discussed at these meetings included:

1. Recent and upcoming elections. The latest opinion polls and election results in Western Europe show a marked swing to the right. However, this trend does not always augur well for anti-Shariah activists, since the “right” in most countries has been absorbed into the politically correct Multicultural consensus. Notable exemplars of the assimilation process include the Tories in the UK, the Progress Party (Fremskrittspartiet) in Norway, and Christian Democratic parties in several countries.

Among the parties that truly resist Islamization, the Party for Freedom (Partij voor de Vrijheid, PVV) in the Netherlands leads the way, emerging in the latest polls as the most popular party in the country. Other parties surging in recent polls and elections include the Austrian Freedom Party (Freiheitlichen Partei Österreichs, FPÖ), the Danish People’s Party (Dansk Folkeparti, DF), the French Front National, the Sweden Democrats (Sverigedemokraterna, SD), and the Swiss People’s Party (Schweizerische Volkspartei, SVP).

This is a distinct improvement over the situation five or six years ago; the wind has definitely shifted in our direction. Whether the change will come soon enough to avert a continent-wide catastrophe is another matter entirely.

2. The increase in Islamically-tinged violence. Widespread violent crime committed by immigrants, especially Muslim immigrants, has been a fact of life in major Western European cities for more than a decade. However, over the past two to five years the level and intensity of violence has increased significantly. The murder of Lee Rigby in May of this year and the ongoing exposure of sex-slavery gangs are just the tip of the iceberg.

The most disturbing trend is the increasing incidence of rapes by (mainly Muslim) immigrants targeting native European women. The number of attacks has increased, and the brutality of the rapes has reached new levels of depravity. Gang-rapes are increasingly common, and gratuitous incidental violence frequently leaves victims physically damaged, disabled, and psychologically scarred for life. Seen from a wider perspective, sexual violence forms part of the pattern of Islamic dominance, and is well-recorded in historic accounts of the hijra, when Muslims migrated to infidel lands.

Other forms of violence include robbery, muggings, stabbings, and street attacks by Muslim gangs against lone pedestrians or couples.

Statistics on the increase of such incidents are often hard to come by, since many governments, including those of France and Sweden, forbid the inclusion of ethnicity when crime statistics are compiled. During the ODIHR side event at OSCE, for example, Felix Strüning was challenged about his assertions on Muslim rape statistics in Malmö. The fact that the Swedish government does not permit the collection of such data allows the authorities to deny the unprecedented extent of immigrant rapes in culturally-enriched areas of Sweden — no one really knows, because no one is allowed to know.

The anecdotal evidence, however, is overwhelming: native Europeans are being increasingly victimized by violent Muslim immigrants, and in most cases the victims have no legal access to any effective means of self-defense.

3. The growing Islamization of public institutions. The most obvious examples of institutional Islamization may be found in the public schools, where halal food is increasingly imposed on all students, Christian holidays and references are abolished, certain activities are segregated by sex, etc. The same processes are at work in all public institutions, however, as well as in private corporations and commercial activities. Much of the food supply in Britain has been made halal, without products being marked as such. Members of the British public who learn the nature of halal slaughter almost universally oppose it, but most people never become aware of the fact that they are buying and consuming halal meats.

Other examples of Islamic encroachment on public life include the subsidized building of mosques, the “parking jihad” (see the Law and Freedom Foundation for more on this insidious process), the creation of de facto “Shariah zones”, and the increasing appearance of the hijab — or even the niqab — among students, teachers, public employees, defendants or witnesses in court proceedings, and television anchors.

These changes are considered admirable and celebrated as “diversity” by Multicultural-minded officials. To anyone with even a rudimentary knowledge of Islamic history, however, they are clearly part of the process whereby a non-Islamic society is incrementally coerced into observing the tenets of Islamic law.

4. Increasing immigration. This is the most important issue; without it, none of the others would be significant. If there were only a handful of Muslim immigrants in Western Europe, and only a trickle of new arrivals, Islamization would not be a major concern. However, Muslim immigration into all countries west of what used to be called the “Iron Curtain” is accelerating, with the possible exception of Denmark.

The most suicidal immigration policies are probably those of Sweden and the UK. The former, by announcing that all Syrian refugees and their families will be welcomed into the country, has effectively declared a unilateral abolition of its borders. Immigration into Britain has remained out of control for the past decade, regardless of which party controls the government. The current coalition government has acknowledged that it can’t even estimate the scope of the problem, nor the extent of illegal immigration.

All work and no play makes Jack a dull Counterjihadist, so one day during the lunch break at OSCE a small group of us played hooky and took a look around the Old Town. 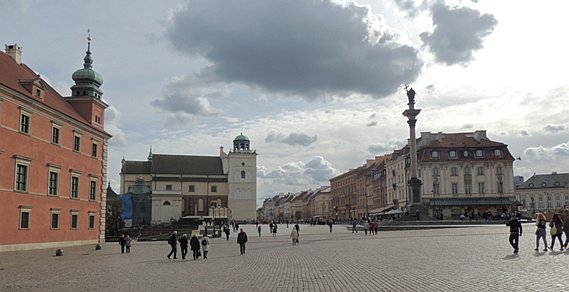 The center of Warsaw was almost completely destroyed during the Second World War, but the plans for the old buildings and streets had been carefully preserved and protected during the Nazi occupation. After the war, during Communist rule, the heart of the old city was painstakingly rebuilt to look exactly like it was before 1939. 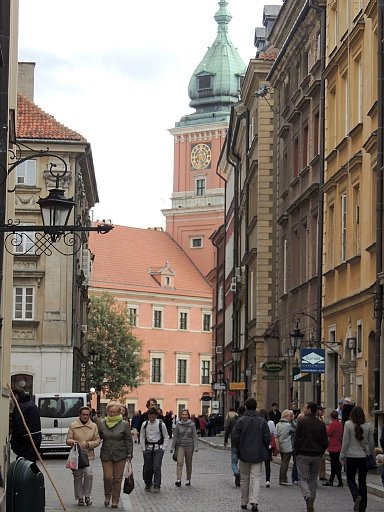 The only difference between the Old Town and other European cities of comparable age is that the buildings don’t quite have that “venerable” appearance. There has not yet been enough exposure to the elements or wear and tear to provide a sense of real antiquity. 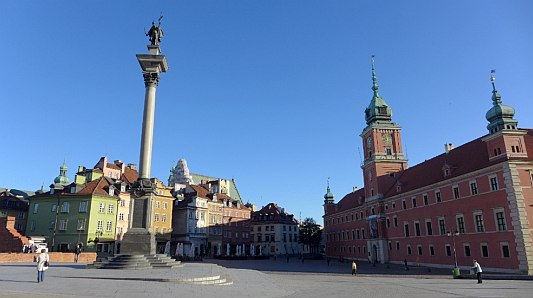 Pieces of the original buildings appear here and there within the lower parts of the rebuilt structures, having been lovingly preserved by the Polish authorities when the city was reconstructed.

At one point we encountered a group of Israeli teenagers who were touring Poland. A British colleague talked to them at length, and sent this description:

There were about 150 kids in all, from Tel Aviv, travelling to sites in Poland where Jews had been living. They had just come from Auschwitz, near Krakow. One young fellow said his grandfather had been a survivor from Warsaw.

When we told them of our support for Israel, they were very surprised, as they thought that Israelis were badly thought of by Europeans. We reassured them that they had many friends and allies in our neck of the woods.

The most surprising thing about Warsaw — and here’s where I get really politically incorrect — was its “whiteness”. There was no significant evidence of mass immigration in the Polish capital, in refreshing contrast to major Western European cities.

Poles drive the taxis, bus the restaurant tables, clean hotel rooms, work the cash registers at convenience stores, run construction equipment, and mow the grass. Mind you, some of them may be Lithuanians or Ukrainians — I’d never be able to tell — but they were distinctly not third-world immigrants.

All of this may be changing, of course. Kebab shops were in evidence here and there, and after three days I saw my first hijab (not counting those at OSCE) among the shoppers in a mall. I also learned that there is a push by Islamic groups for the construction of a mosque in Warsaw. And Poland has its share of progressive-minded gutmenschen who want to climb aboard the Multicultural oxcart.

By and large, however, Warsaw resembles London or Amsterdam or Oslo as they appeared fifty years ago, when I first moved to England. It is a European city populated by Europeans, who fill all the necessary societal niches. I had forgotten what such a place looked like — it made me so buoyant that I wanted to tip the cab drivers and waitresses extra, just for being Poles.

Warsaw is safe, friendly, and very inexpensive. A sufficient number of people speak at least a little English, allowing a monoglot Anglophone to navigate the city’s amenities without anxiety.

The Red Pig became the mascot of our gatherings: 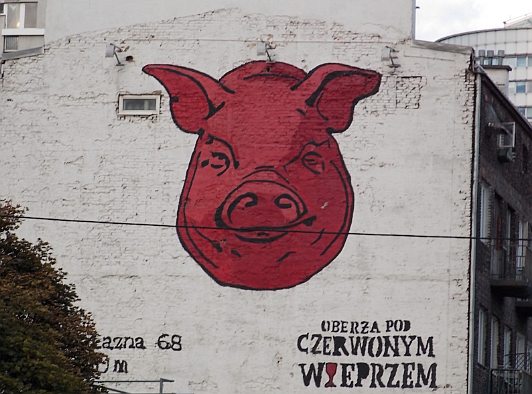 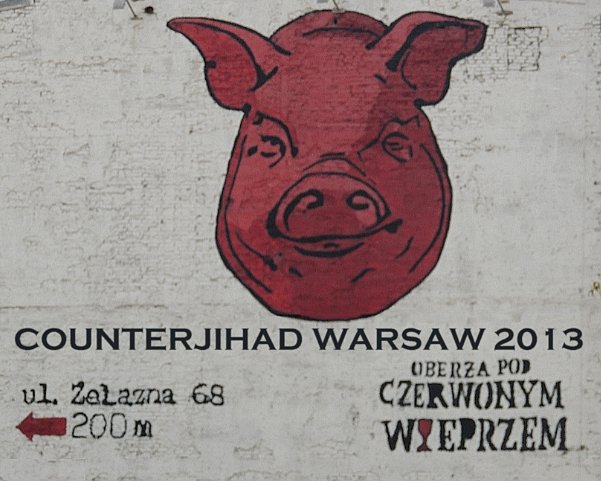 This mural is an ad for a restaurant. The text says, roughly, “The Red Pig is below.”

It may be that local Muslims find this emblem offensive, but there aren’t enough of them to mau-mau the local authorities into painting it over.

Or maybe the Poles just don’t concern themselves about such trivialities.

4 thoughts on “Slouching Towards Warsaw”