As I mentioned last October, Poland is relatively free of Muslim immigrants, which made it a refreshing place to visit after seeing the condition of so many Western European capitals. Unfortunately, the Polish authorities seem to be preparing to join the rest of the European Union in its celebration of extreme diversity.

Our Polish correspondent Green Infidel sends this photo from Warsaw. Notice the fourth language represented in the sign — you’d think it might have been, say, Czech, or Lithuanian, or even Romanian to reflect more accurately the likely demographics of visitors to Poland: 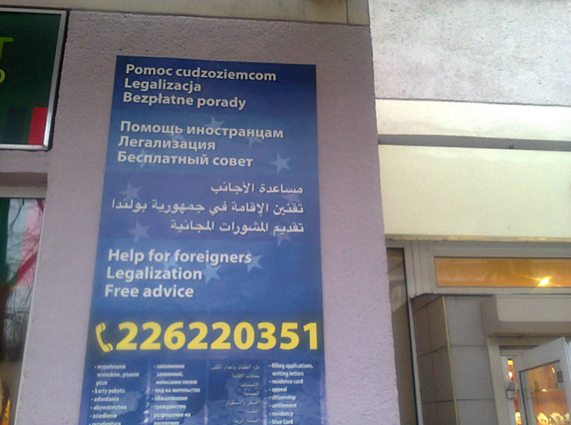 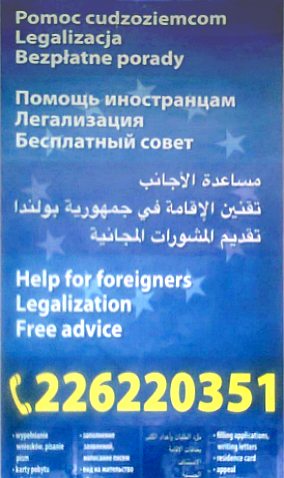 Green Infidel includes the following note about the sign:

Yesterday, while stuck in traffic, I noticed a poster, opposite the Warsaw Masovia region immigration office where a friend of mine works. I asked her to take a photo.

Besides the Polish, English and Russian (the last one being the language, along with related ones such as Ukrainian, that she most often has to deal with), a certain other language, perhaps signifying the “cultural enrichment” that the powers-that-be expect to strengthen in Poland?

Besides, it seems very similar to the EU “help for immigrants” websites you posted about previously — and indeed contains the EU stars, although less noticeable, behind the text.

This is Eurabia, Polish-style. Our tax Euros are in action, helping culture-enrichers to settle and “enrich” society also in this part of Europe.

Recently it was announced that the Polish government won a great “victory” — many more billions of Euros from Brussels, than it had expected. It made me wonder — what was the EU expecting in return?

In any case, the public here seems to have much stronger opinions against the “Religion of Peace” than in any Western country I have visited. And is prepared to voice it. There may be hope yet…

75 thoughts on “Welcome to Poland!”