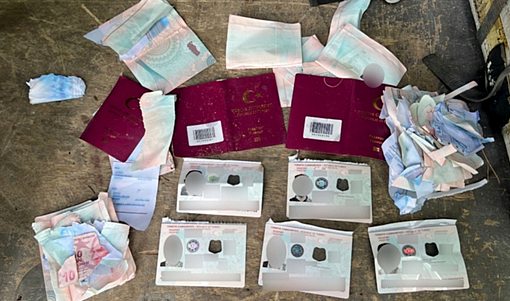 Many thanks to Hellequin GB for translating this article from the Austrian tabloid Heute. The translator’s comments are in square brackets:

Photo evidence — refugees tear up passports at the border

Asylum trick at the border: Heute reader Michael found passports, torn money and plane tickets from refugees in a meadow. The background.

While walking, the 30-year-old made an explosive discovery on Friday: Heute reader reporter Michael* (name changed by the editors) was in Andau, Burgenland, when he discovered torn documents and papers on the ground behind a windmill.

On closer inspection, he recognized: These were five Turkish passports, banknotes and plane tickets from Istanbul to Sarajevo.

The documents are likely to have been deliberately disposed of by migrants before they were apprehended, in order that they might hide their real place of origin and actual citizenship from the authorities.

“After we massively tightened border controls during the past few months, refugees have been resorting to a wide variety of measures to gain asylum,” says the Interior Ministry. The trick of the asylum seekers seems to be already known there. However, the owners of the travel documents have not yet been traced.

And that despite the fact that the walker turned to the local police station immediately after finding them: “But there they told me to just throw the documents away,” which the man then did. [Sorry, but I have to say this: MORON.]

This is generally how these so-called refugees have been handled since 2015. Politicians and the filthy left-wing media act completely surprised once again. Evidence and proof of this has been constant, and according to the public service media and politicians it only comes from “conspiracy theorists” and is in this way easily delegitimized to the public.

The globalists, the UNO, the WHO, the USA, Klaus Schwab, have set themselves the goal of destroying Europe, and the governments have their trained ideological fools who implement this. German politicians cannot think and act independently; they have been proving this for decades. They are controlled like puppets. You can see how faithfully they implement the agenda of the WEF and how obediently they submit to the USA. But stupid Michel still believes that things would get better with the election of different people.

This naïveté is outrageous, but that’s typically German. They just don’t want to take care of themselves and take responsibility for their own lives; they seem to need an overlord. Away with parties and politicians! They are the culprits in Germany and all over the world. This party system is a neck-breaker for the “little” people.

One thought on “We Don’t Need No Stinkin’ Passports!”