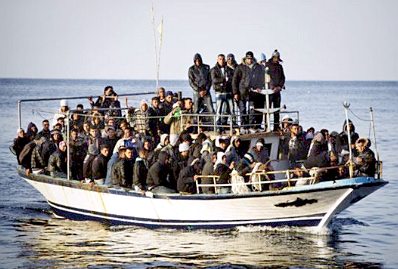 Many thanks to Hellequin GB for translating this article from Tagesschau. The translator’s comments are in square brackets:

A few days after the arrival of the rescue ship Ocean Viking in Toulon, France announced that it would send 44 of the refugees back to their homeland. They were not entitled to an asylum procedure, it said.

After the dispute over the sea rescue ship Ocean Viking with 234 refugees on board, which was ultimately taken in by France, the government in Paris wants to send 44 of them back to their countries of origin.

The ship arrived at the military port of Toulon on Friday. A check then showed that 44 of the refugees were not entitled to an asylum procedure, Interior Minister Gérald Darmanin said in the National Assembly in Paris. He did not give the reasons for this.

He has already contacted the countries of origin to organize the repatriation as soon as possible, as soon as the refugees’ state of health allows it. France, Germany and nine other European countries have agreed to take in the remaining refugees. [I bet they did; weapons and all?]

The Interior Minister defended the decision to have the Ocean Viking dock in France after an Italian refusal, against criticism from a right-wing MP. “Would you have let these 44 children die if you had been responsible?” the minister replied, looking at the underage refugees on board. [Sorry, but who’s responsible for picking them up and ferrying them across the Mediterranean? It’s not the Italians. It’s those human traffickers who are responsible, and each and every country that lets them in afterwards that is responsible for possible deaths. And they are responsible for the innumerable deaths some of these “refugees” are bringing down on the population of the host countries.]

The government of Italy’s new ultra-right Prime Minister Giorgia Meloni had refused to allow the Ocean Viking to enter an Italian port, sparking a dispute with France. The neighboring country accused Italy of violating international law. [Rubbish, it’s the nearest SAFE port, and of those there are plenty on the North African coast, a couple of hours away from where they picked up their cargo, and not DAYS.] In addition, France suspended a solidarity agreement reached in June, according to which Mediterranean migrants would be taken in by Italy, and strengthened its controls at the Italian-French border.

On Monday, both countries tried again to smooth things out. French President Emmanuel Macron and Italy’s head of state Sergio Mattarella confirmed the great importance of relations between the two countries in a telephone call, the presidential offices said.

Personally, I’d send them all back, because these people aren’t refugees, they are economically migrating parasites, and I would love to know from were all the money comes for them to travel through Africa. Because I can tell you right now, it’s not cheap. Thirty years ago you’d need — on a frayed shoestring — US $1,000 per month travel, EACH, and most of that money went for transport, the rest for basic food and basic accommodation. With the fuel and food prices as they are, what does anyone think it’s costing now, especially since most don’t even earn this amount — from thirty years ago — today in a MONTH? So where does the money come from?

Also, isn’t it funny how quickly an asylum application can be checked and repatriation initiated in France? Something like that would be unthinkable in “oh-so-efficient” Germany. There the processing takes months and then there’s the possibility of objecting to a negative decision — paid for by the German Tax-Michel — then there are these countless organizations — government-sponsored through tax-exemption and whatnot — that prevent deportation. One does wonder why the same set of “standards” aren’t applied in France?

But maybe the French shouldn’t count their eggs until those chickens are actually gone out of the basket and are on their way to the home farm. Come on, the Maquereau says one thing to appease the French and does the exact opposite after he has received his instructions from George or Klaus, like any good puppetician.

One thought on “France Sends a Few of ’em Back”