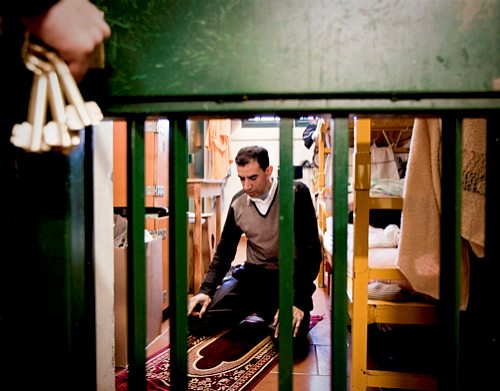 When secular, non-practicing criminal Muslims get sent to prison, by the time they are released, they tend to be full-fledged mujahideen, ready to slay infidels for Allah. To make matters worse, many non-Muslim criminals convert to Islam during their prison terms.

Based on the following report, this is especially true in France. Many thanks to Gary Fouse for translating this article from the French cultural organization Avenir de la Culture:

The weekly Valeurs Actuelles has devoted a long article to a very current problem: The radicalization of prisoners. While the incidence is more and more frequent, authorities are confronted by a threat difficult to quantify and detect.

Because, according to a supervisor, “The most dangerous prisoners are less talked about,” practicing techniques of dissimulation for months, even years.

“There are dozens who escape vigilance despite their dangerousness,” warns an administration official.

However, the commands of rigorous Islam are becoming the daily rule of a growing number of prisoners in certain prisons, explains the editorial staff of the weekly.

Proselytizing and calls to prayer have begun at the Bois-d’Arcy (Yvelines) prison, for example. These rules are spreading in those prisons where Muslims are in the majority, either practicing or cultural, notes a chaplain. Numerous prisoners declare themselves to be without religion or convert to Islam, “either out of conformity or due to an inferiority complex.”

In another example, at the famous Baumettes prison at Marseille, it is estimated that 90% of the prisoners are Muslims. According to a staff member, Eric Diard, “Islam is omnipresent, and rules.” But with different profiles. “There are those who are not very intellectual, who believe themselves worthless, and who are told that they count for Allah,” he explains.

But Islamism and radicalization threaten all of the prisoners. According to a parliamentary report in January 2022, 81% of the prisoners who convert are French, all faiths combined.

The radicalized still represent a tiny portion of the prisoners in France. But until when? To identify them, informants are being activated in detention centers and prisons. They are being asked to report changes in appearance and behavior: A full beard, radical remarks, refusing to greet women, and regular prayers.

When radicalized prisoners are detected, they are sent to special sections.

As hundreds of those radicalized are reaching the end of their sentences, dozens are leaving prison every month. “Some are more dangerous upon release than upon entering,” warns Eric Diard. “They hate the country,” adds Cyril Huet-Lambing, regional head of the prison union, SPS.

The task promises to be especially complicated for the intelligence services. “It takes 25 agents to monitor one target; how many will it take to monitor the 500 radicalized prisoners who will leave here by 2024?” asks the former deputy of Bouches-du-Rhone. The concern increases at the end of the sentence.

“It only takes a handful to cause a catastrophe in the country,” worries a member of the staff who recalls that one attack a day is currently being prevented,” according to the leadership of the intelligence services. Alarming.

3 thoughts on “A Vivarium for Jihad”