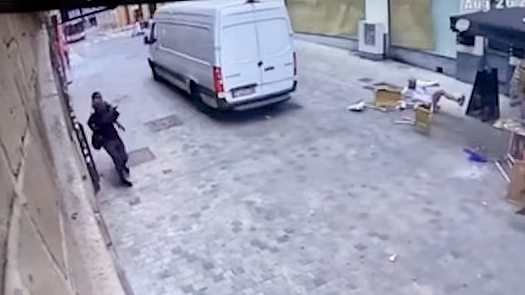 Last Friday afternoon a young “Belgian” drove his van at high speed into the tables of a café terrace in Brussels, injuring six people. The youthful mujahid was relatively incompetent in his jihad, since none of his victims required hospitalization. Nevertheless, the attack achieved its intended effect, which was to strike terror into the hearts of the infidels.

The incident has a Mohammed Coefficient of 100%.

The following news videos feature surveillance camera footage of the rampaging van. Many thanks to Vlad Tepes and RAIR Foundation for the subtitling.

The first video was translated from the Dutch by Gary Fouse:

The second video was translated from the French by MissPiggy:

Below are excerpts from stories about the incident in three Belgian papers (two in Dutch and one in French, all translated by Gary Fouse).

The incident took place around 12:50 this afternoon on the Sint-Michael Street, a side street off Nieuwstraat. There the driver of a white van drove at a high speed into the outdoor tables of the City Pizza snack bar and the Le Corbeau Tavern.

In the incident, six persons were injured. None of them had to be taken to the hospital.

After the collision, the driver fled at a high rate of speed. The police set up a perimeter and, among other things, used a helicopter to track down the driver. In addition, victims and witnesses were interviewed and surveillance camera images analyzed.

Almost immediately after the incident, it was thought there were terrorist motives. Witnesses claim that they heard the perpetrator shout “Allahu Akhbar!” or something of that nature. The OCAD, the Agency for Coordination and Threat Analysis, based on the initial evaluation, raised the threat level from 2 to 3 (serious), but shortly afterwards it was brought back to level 2.

According to information given by HLN News, the driver of the van is reportedly Muhammed G., a Belgian, aged 28, from Saint-Josse-ten-Node, born in Turkey. It has been confirmed to La Libre that he is not known for ties to terrorism. Nor does he have any ties whatsoever to recent incidents in Antwerp.

One thought on “Vehicular Jihad in Brussels”