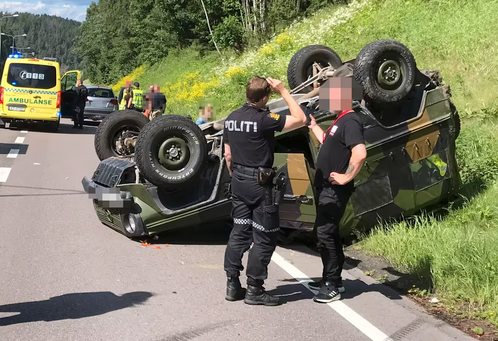 Yesterday a couple of female culture-enrichers in Norway took exception to the burning of a Koran by a Counterjihad organization, and attacked a vehicle carrying members of the group, causing it to overturn.

Fjordman sends this summary of what happened:

Some activists from the organization Stop the Islamization of Norway (SIAN) had just burned a copy of the Koran in Oslo. A car with several of their members was then followed by two women in another car, who used their vehicle as a weapon to attack the SIAN activists on a public highway and flip over their car. The five SIAN activists sustained injuries during the attack, but not life-threatening ones.

The female driver and her female passenger, both of whom appear to be Muslim immigrants, have admitted to the police that they wanted to hit the anti-Islamic activists. So far they have only been charged with doing bodily harm. However, they intentionally hit another car on a public highway with a lot of traffic. Many people would view that as attempted murder.

A video of the incident may be viewed at Snaphanen.

Below is an account from Swedish state media about the events outside of Oslo. Many thanks to Gary Fouse for translating this article from SVT:

The Norwegian anti-Islamist Lars Thorsen was forced off the road Saturday when he was riding in a car on the highway. The incident — which was videotaped by other drivers — occurred after he took part in a Koran-burning outside a mosque on the outskirts of Oslo. Now two women, driver and passenger in the colliding car, have been arrested by Norwegian police.

The Norwegian police believe that they drove into the car with Lars Thorsen, leader of the anti-Islam group, Stop the Islamization of Norway (SIAN), on purpose.

In the SIAN car, which ended up upside down when it was run off the road, there were five people in all. Nobody was seriously injured.

The woman who was driving the other car was arrested on Saturday, suspected of causing serious bodily injury and for deliberately causing the collision. On Sunday, police reported that the passenger was also arrested.

“My client has been affected by what happened,” says her defense attorney to NRK.

More articles about the incident (in Norwegian):

6 thoughts on “Vehicular Jihad in Norway”