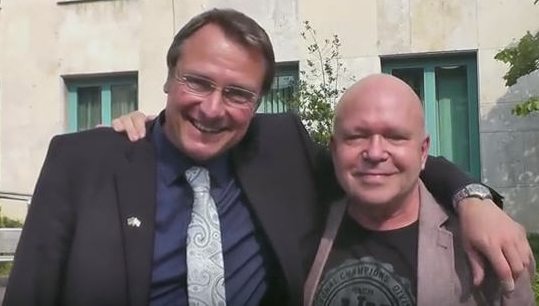 We’ve been posting translated material by or about Michael Mannheimer since at least 2010. Now it has been confirmed that Mr. Mannheimer died earlier this month at the age of 67.

Many thanks to MissPiggy for translating this article from Politically Incorrect:

Michael Mannheimer, One of the Very First Islam Critics in Germany, is Dead

The Islam- and system-critic Karl-Michael Merkle, alias Michael Mannheimer, has died of a heart attack at the age of 67.

The Islam critic Michael Mannheimer died on March 13, 2022. It was completely unexpected and unfortunately far too early, at the age of 67. He suffered from heart problems that were exacerbated by taking psychotropic drugs, which eventually caused him to die of a heart attack, according to his sister.

The rumors of “murdered by poison” or speculation about sinister actions by the Mossad, the CIA or other intelligence agencies are all from the realm of untenable mind games, fantasy tales and fake news.

Mannheimer, whose real name was Karl-Michael Merkle, lived in a secret location in Asia and moved there to be far from harassment. Now that he has died, the location can be shared: it was Cambodia.

Three years ago he had told me once by email that the medical care in Cambodia was very bad. He even had to pull a tooth himself, with help of dentist friend in Germany giving him instructions via Skype.

Michael Mannheimer was a valuable fellow campaigner in the years 2011-2015, especially in the matter of Islam criticism. Together we held many educational rallies, hitting the streets at home and abroad. During this time period, we were akin to brothers in spirit.

For example, on March 31, 2012, at the Counterjihad event in Aarhus, we were together at a highly memorable event in Denmark. That Counterjihad rally triggered the largest police operation in the history of this Danish city, which included helicopter support. More than 2,000 partly militant counter-demonstrators from Antifa and radical Muslims kept the city in suspense. At that time, Michael was still clearly in solidarity with Israel, the only real democracy in the Middle East. Together we stood alongside Jews who were in the crosshairs of political Islam.

That same year we re-founded the White Rose Resistance movement together with Susanne Zeller-Hirzel (Sophie Scholl’s best friend), PAX EUROPA (comrades-in-arms from the citizens’ movement), and the “Die Freiheit” Party. Our struggle was directed against every totalitarian ideology — national socialism, socialism, communism and political Islam.

Together with the then-managing director of BPE, Conny Axel-Meier, we followed in the footsteps of the heroic resistance fighters and visited the historic courtroom in Munich, where these fighters for democracy and freedom were defencelessly exposed to the judicial henchmen of National Socialism who brought them to the gallows.

The BPE member Susanne Zeller-Hirzel, who herself escaped the guillotine only by her clever action when appearing before Judge Freisler, was in the end sentenced to “only” six months in prison. In a 2009 interview she predicted that one day soon, Islam critics would be thrown into prison. Following the scandalous verdict in Augsburg last Tuesday, that day has arrived in the year 2022:

Michael and I joined forces in court against the Stuttgarter Zeitung in June of 2015, after we were slandered in an article as “known neo-Nazis”. Although my case was successful at the Regional Court of Stuttgart, Michael’s, strangely enough, wasn’t. I suspect this could have started the process of inner change which resulted in hardening him and what would eventually lead him astray. At that time, however, we were both still on the same unwavering course.

Mannheimer possessed a profound knowledge of history and of Islam which was very beneficial for our movement. In his life, he had traveled to over 80 countries and had a wealth of experience. Unfortunately, we parted ways in 2016. He took a different direction, which I regretted very much. After an accumulation of criminal charges against him, he decided to escape the grasp of justice, leave Germany and emigrate to Asia. He immersed himself in conspiracy theories, which I could no longer understand, however much as I tried.

Despite his attacking PI-NEWS and myself for our basic pro-Israeli orientation, we remained in contact. During an email exchange we had three years ago, he described his difficulties living in the faraway country. I never thought, however, that his life could end so soon.

In memory of the good old days: rest in peace, Michael.