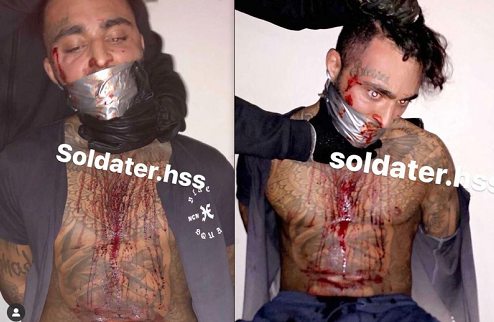 Last month I reported on a “Swedish” thug named Abbe Abdalla Alsaadi, more commonly known by the nickname “Blattelito”. He had been convicted of murdering his girlfriend, only to have the charge reduced by an appellate court. He was paroled after serving 2.5 years of a 3.5-year sentence.

Blattelito has been all over Swedish news for the last few days. He was reportedly kidnapped and tortured, and pictures of his supposed ordeal were posted on social media. He “escaped” from his captors the same day, and was found by police.

After initially opening an investigation into abduction and aggravated assault, police are now focusing on charges related to filing a false report. It seems that Mr. Alsaadi has made himself the Jussie Smollett of Sweden.

Gary Fouse has translated three articles about the Blattelito affair. The first, from Samhällsnytt, is an early report about his purported abduction:

The murder suspect and social media figure Abbe Abdalla Alsaadi, better known under the name, “Blattelito”, was recently released early on parole after serving two-thirds of his prison sentence in connection with a 29-year-old mother of a small child being found dead. After mocking the Swedish judiciary for months, now bloody images are shown on social media profiles.

Samhällsnytthad drawn attention to the social media influencer’s scornful video clip on social media after the Svea appeals court overturned the Solna court’s sentence of 18 years in prison for the murder of his ex-girlfriend. The appeals court ruled that the prosecutor had succeeded in showing that Alsaadi injected Annie with Tramadol, but not in what amount.

Blattelito, who is of Iraqi background, brags how he has “f***ed the whole system’s father” with reference to the Swedish judiciary. Furthermore, Blattelito has also described Swedish prison as “a hotel-worst luxury”.

In addition to attacks against the judiciary, Blattelito continues, as usual, with his activities and profile as gangster in spite of the events linked to the death of the mother of a small child.

The profile post strikes many as scornful and has resulted in many comments with the message that karma will punish him in the future. Now images are disseminated of what appears to be a kidnapping situation where the social media figure sits bound with tape over his mouth.

Blattelito, who normally posts material on his social media account several times a day, has not updated it since yesterday. Expressen checked with police to confirm whether a kidnapping took place, but police reported to the newspaper that they have no knowledge of the event.

At the end of January, video clips circulated on social media and on YouTube which showed how Blattelito visited the so-called vulnerable area of Hjällbo in Gothenburg, where he was then attacked by a gang.

Below is a video where Blattelito is shown being beaten:

[See the original article for the video. Video caption: “This is for Annie, Abbe Blattelito.”]

The second article, from Fria Tider, was published after Blattelito miraculously escaped from his kidnappers:

Freed Blattelito: “They connected me to a battery”

The immigrant figure and influencer [social media figure] Abbe “Blattelito” Alsaadi, who was acquitted of the murder of his ex-girlfriend, Annie Andersson, was kidnapped and tortured by a gang of “small kids”, who, among other things, connected him to a car battery. That is what he himself says in a video.

According to the immigrant figure, the kidnapping and torture was about money. He was forced to tell where he kept money, he states in the video, after which he was able to escape from the “amateurs” who tried to guard him somewhere out in the woods.

He stated among other things that he broke into a cabin in a “slightly secret” place and then rested in the cabin, after which he was able to trek a long way out of the woods without shoes, and finally make it home.

In the video Blattelito also says he regrets that everyone who was hoping that he was dead will now be disappointed.

According to the police website, authorities have initiated an investigation into suspected kidnapping and extremely serious beating. The case is being led by Norrköping and Police Region East.

The final article, also from Fria Tider, was published earlier today. It concerns the police investigation into suspicions that Mr. Alsaadi had pulled a smollett on the authorities:

Alsaadi is one of those suspected of false alarm after it was alleged that he was kidnapped and beaten this weekend, reports Corren.

This weekend pictures were disseminated on the internet of social media influencer Abbe “Blattelito” Alsaadi in which he was bound and bloody. But “Blattelito” had not been kidnapped, according to Expressen, which earlier today reported that the investigation into kidnapping and especially aggravated abuse will be discontinued.

Instead, three persons are suspected of filing a false report, which may result in up to one year in prison. According to Corren, “Blattelito” is one of the suspects.

Police had reportedly already found him on Saturday, the same day the pictures were disseminated, together with two other persons.

All the suspects know each other.

Photos and a video of the alleged kidnapping are reported to have been found on a phone that belongs to a friend of “Blattelito”, and who himself has a large account on Instagram, writes Expressen.

“Blattelito” says he cannot understand how he can be a suspect since, according to his own statement, he neither took nor leaked the pictures.

9 thoughts on “The Ordeal of Blattelito Smollett”