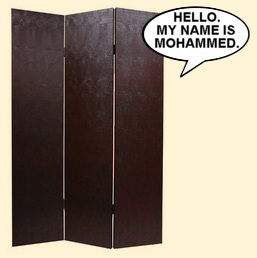 A Dutch schoolteacher had to go into hiding after showing a cartoon in class.

Many thanks to Gary Fouse for translating this article from De Dagelijkse Standaard:

It is unbelievable, but this happens in the Netherlands. In Rotterdam, to be precise.

It doesn’t get any worse than this. A Rotterdam teacher has to go into hiding because, according to a group of radicalized girls, he hung a cartoon of Mohammed in his classroom. They demanded he take away the cartoon, someone took photos, the images were posted… and the rest is history.

The photo has been widely shared on Instagram. … “If this isn’t removed very quickly,” writes one Instagram user, “then we’ll do something else.” According to the police, there are also online threats against the teacher. Meanwhile, there is a “substantial” digital investigation to hunt down the senders, says the police spokesperson.

Mind you, the photo was not a Mohammed cartoon, but a cartoon of a person with a Charlie Hebdo t-shirt, in which he is sticking his tongue out at a terrorist — a jihadist. The teacher tried to explain to “the girls” that it was not Mohammed, but they refused to listen to him. He had to be — and would be — censured

It has come this far: A teacher has to go into hiding because he hung a Mohammed cartoon on the wall, and Islamist girls “demand” that it be removed. The showing of these cartoons in our free Western Netherlands is now becoming almost an act of resistance. How unbelievably sad.

For five years a cartoon has hung on the wall of a classroom in Rotterdam. Monday students demand its removal. Now a teacher has gone into hiding.

On the teacher gone into hiding. I expect a Rotterdam action and no support, blah, blah. The cheeky girls who are going to be suspended. There will be complaints against these girls. They need to know their place. Back to the loft.

Naturally, the chance this will happen is minimal. Because as the NRC reports:

Nobody has yet been arrested. The community police officer was at the school the whole day “looking for the connection” with the students.

Look for the connection with the students? All these students need to hear that their misbehavior will not be accepted. Period. If they have a problem with that, they can look for another school-maybe a nice madrassa or something.

4 thoughts on “Infidels Must Not Show Cartoons!”