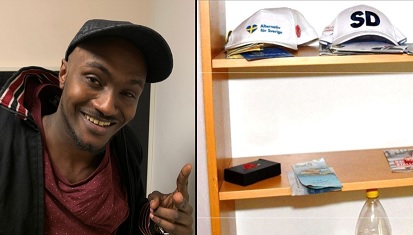 The culture-enriching crimes described in the article below are particularly gruesome. Readers who are sensitive to descriptions of brutality are advised not to read the portion of the text that lies below the jump.

Many thanks to FouseSquawk for translating this piece from Fria Tider. The translator reports that the perpetrator is said to be Sudanese:

“He is a racist, he has an SD cap”: Mohamad’s play before he murdered Tommie Lindh

[Photo caption: Abubaker Mohamad Awad mocked and grimaced before police camera when he was arrested after rape and murder. On the right: Shelf in Tommie Lindh’s living room.]

Abubaker Mohamad Awad accused Tommie Lindh of being a racist, because he had an SD [Sweden Democrats] cap in his apartment. He then stabbed the 19-year-old and raped the victim’s girlfriend in the dying Tommie’s blood.

The extensive investigation that the police conducted after the murder of Tommie Lindh in Härnösand on May 10 of this year has now been released.

It appears that the accused, Abubaker Mohamad Awad, just before the murder, had reacted to the fact that Lindh had an SD cap in his apartment where a late party was being held.

The accused 23-year-old had come into the room where Tommie Lindh’s girlfriend slept on several occasions, although she had asked him to leave her alone.

The African finally demanded that the young girl explain why Tommie Lindh had an SD cap on the shelf in the hall.

“And then I explained to Abubaker that Tommie was very involved in politics and thought that it was interesting. He then called Tommie a racist and so on,” the woman said during questioning.

The African then began to accuse the woman of being a racist, and when she said that she wasn’t, he explained that he could not trust her.

“Then he got even angrier. Then he said again if I didn’t stand up, he would kill Tommie and me,” said the rape victim.

The 23-year-old held a knife to the woman, and inside the toilet forced oral sex on her.

Then another Swedish man, whom the woman had alerted earlier, came into the apartment. He was also immediately accused of being a racist by the rapist, and was stabbed when he tried to get the African to leave the residence.

At the same time Tommie Lindh and the rape victim were in the bathroom, the 23-year-old went in there and stabbed Tommie in the neck, back and chest.

While Tommie Lindh lay bleeding, the African dragged the girl with him to the bedroom, where he raped her.

“There is blood on the bed; it is Tommie’s, “ the woman said during questioning.

After a lot of ifs and buts, police came to the scene and arrested the perpetrator.

The woman had earlier called in several emergency calls, but only after an hour and a half, when it was already too late, did a police patrol arrive at the scene.

After Abubaker Mohamad Awad was arrested for the crime, he laughed in front of the camera at arrest, made grimaces and victory signs with his fingers.

During interrogation, he claimed that it was the woman’s “brother” who had forced her to say she was raped.

“Her brother, who is racist, wants to report it as rape. Otherwise it would be a disgrace for her and her brother that she slept with a dark-skinned guy,” the 23-year-old said.

11 thoughts on “A Sweden Democrats Cap? You Must Die!”