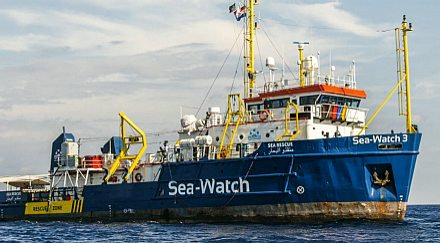 When Matteo Salvini was Italian Minister of the Interior, Carola Rackete, the captain of the migrant-ferry vessel Sea-Watch 3, defied Mr. Salvini and the Italian government by ramming a patrol boat and forcing her way into the port at Lampedusa.

It later emerged that three of the “refugees” she carried to Italy were notorious torturers for the people-smuggling gang that arranged the trafficking of migrants across the Mediterranean. The three men have now been convicted in an Italian court and sentenced to lengthy prison terms.

As a matter of interest, the case has a Mohammed Coefficient of 66.7%

Many thanks to MissPiggy for translating this article from the Swiss weekly Die Weltwoche:

The Code of Silence Around Captain Rackete

One year ago the German rescue ship Sea-Watch 3, of all ships, brought three torturers from the human smuggling mafia from Libya to Italy. The embarrassing news is being systematically concealed.

Last week, on May 28, a court in Messina, Italy sentenced Mohamed Condé, 27, of Guinea, and two Egyptians, Hameda Ahmed, 26, and Mahmoud Ashuia, 24, to 20 years in prison, each for torture, rape and involvement in a criminal organisation. The three Africans were found guilty of systematically torturing migrants as members of a Libyan smuggling gang in order to extort money transfers.

The prosecutor Maurizio de Lucia explained that the verdict was decided on the basis of the documents provided and delivered with shortened court proceedings hidden from the public gaze. In return, the punishment for those accused (who did not confess) was reduced by one third.

Disclosure of the toxicity at the highest level

The three men were arrested in a refugee shelter in Messina, Italy last August. According to de Lucia, these torturers employed by the smugglers were identified by a dozen migrants who had made the crossing from Libya, including on the rescue ship Alex in July.

According to the Gazzetta del Sud, the Sicilian anti-mafia unit DDA had previously targeted the three. While the two Egyptians abused the victims in a camp in Zawiya controlled by the smugglers, Condé is said to have filmed the scenes. The clips were sent to relatives to reinforce the ransom demands. This brutal method is well-known, and is also used by people smugglers in Mexico.

As the well-known reporter Chiara Giannini reported back in September in the newspaper Il Giornale, citing police sources, the three torturers had arrived in Italy from Libya on June 29, 2019 on the German-Dutch rescue ship Sea-Watch 3. It was a revelation of the highest level of toxicity. At that time, Sea-Watch 3 made headlines worldwide when Captain Carola Rackete, with forty migrants on board, broke through a blockade imposed by Interior Minister Matteo Salvini and forced entry into the port of Lampedusa. Some celebrated Rackete as an icon of humanity, but others cursed her as a naïve stooge at best who was used by unscrupulous gangs of traffickers. Criminal investigations were opened against both the hardliner Salvini, who was toppled last September, and the revolutionary Rackete.

Giannini’s revelation was pure dynamite against this backdrop. Even more astonishing, this has been ignored almost uniformly by the established media, both in Italy and internationally. It may have to do with the fact that Il Giornale — the newspaper is owned by Paolo Berlusconi, the brother of the famous Silvio Berlusconi — is seen as right-wing. However, the report was never denied. The police, the prosecutor’s office, the government, and above all Sea-Watch have never denied it. A spokesman for the NGO mentioned once: “We cannot rule it out, but we do not have any reliable information. People come without passports.”

But this is exactly the problem: Nobody knows who these alleged refugees are who are collected off the Libyan coast. Even if one does not accuse Ms. Rackete and similar networks of deliberately bringing criminals to Europe, the nonchalance with which they accept this is astonishing. After all, the self-proclaimed sea rescuers play into the hands of the smugglers’ mafia by taking over the costly journey across the Mediterranean. The three torturers undoubtedly chose the least risky route for their transfer to Italy. The question therefore arises whether they had specifically chosen the Sea-Watch 3 for their transfer, because it was easiest to locate due to GPS tracking.

Eight months have passed since Giannini’s revelation. That should have been enough time for Sea-Watch to investigate. Even if the identity of the passengers was not known, they could have been easily identified from the available footage. There were two embedded journalists who had accompanied the entire mission of the Sea-Watch 3. In the official documentary film, which was edited in accordance with privacy protection, the facial contours are recognisable in several places, and have a striking similarity to the mug shots of the three torturers.

But the NGO refuses to comment on specific questions raised by Weltwoche: Was the affair investigated internally? Were lessons learned? Instead of providing answers, Sea-Watch’s press office reacts with rambling statements about the misery of refugees in general. It is not responsible for clarifying identities. Sea Watch can do this without serious detriment because the established media seem to have fallen into a kind of collective “omerta” (code of silence). One would risk perhaps having to agree with Matteo Salvini on this point.

Despite the media’s silence, the scandal is boiling up all over on social media.

The human smuggling business in the Mediterranean has rapidly flourished since Salvini’s departure. In the current year, illegal crossings between Libya and Italy have already increased to four times the number registered last year. The Corona travel bans do not apply in this sector.

6 thoughts on “The Shadow of the Torturers”