Last year’s snap election in Austria confirmed my assessment of the character of Chancellor Sebastian “Boy” Kurz: he is an unprincipled opportunist who will tack in whatever political direction is required to keep his career sailing towards greater power and control.

Prior to last September Mr. Kurz had presided over a coalition government which included his party, the ÖVP (Österreichische Volkspartei, Austrian People’s Party) and the “far-right” FPÖ (Freiheitliche Partei Österreichs, Austrian Freedom Party) led by Heinz-Christian Strache. Unfortunately for both men, Mr. Strache’s “Ibiza scandal” brought down the government and forced a snap election.

When the smoke cleared after the election, Sebastian Kurz remained top dog in the Austrian political scene. The only difference is that now he leads a coalition with the “far-left” Greens. In other words, he’s willing to do whatever it takes to stay in power.

Part of the ÖVP’s New Green Deal involved installing a Muslima named Alma Zadic as justice minister. In the essay below Elisabeth Sabaditsch-Wolff provides an overview of Ms. Zadic in her new political role. For readers who are interested, Elisabeth has also written two pieces at Gatestone on the new government, “The Austrian People’s Party and the Greens — A Successful Coalition for the Future?” and “Austrian Coalition Agreement: The ‘Road to Serfdom’”. 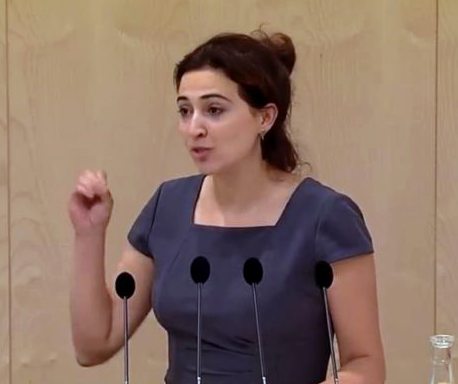 Austria’s new minister of justice, the pretty, smart thirty-something Alma Zadic, currently occupies the center of attention in Austria, that is, in Austrian mainstream media. She is known for her outspokenness with regard to “online hatred”, and she has been turned into the poster girl for the fight against “online hate”, calling for and looking to implement strict measures to eradicate this particularly nasty form of hatred. She needs to look no further than Germany, where the previous minister of justice and current foreign minister Heiko Maas has already paved the way for a law that allows police to raid the homes of Facebook users in the middle of the night simply for voicing an opinion and not being polite enough about it.

In a recent interview, Alma Zadic said she was born in Tuzla during the Bosnian war and fled together with her brother and her parents to Austria. Her father arrived in Austria in 1992 and was reunited with his family in 1994, when she and her brother and her mother left Tuzla in a UN convoy. Zadic says she was traumatized by these events and does not remember most of what happened prior to entering school in Austrian at the age of 10. She did not feel welcome in her first school, mostly because she did not speak German yet; only when she switched to a school with a higher proportion of foreigners did she feel accepted and supported. Zadic reports that she was subjected to racism as a young girl and often shed secret tears.

Nevertheless, Zadic was able to take advantage of Austria’s excellent education system by finishing school, graduating from law school, gaining practical experience in a place like the Catholic university in Viacenza, Italy, and a postgraduate degree at Columbia University. This was complemented by traineeships at the International Organization of Migration as well as the International Criminal Tribunal for the former Yugoslavia in The Hague. She practiced law until she was elected a member of the Austrian parliament in 2017 for the far-left “Liste Pilz”, which she left for the Greens when re-election chances diminished for the 2019 elections.

Early this month, when the coalition government comprising the Austrian People’s Party and the Greens Party was wrapped up, Alma Zadic was given the portfolio of minister of justice. Right away, social media on both sides of the political spectrum erupted: on the one hand, Zadic was criticized for her involvement in a lawsuit following a Tweet in which she posted a photograph of a member of a fraternity, accusing him of “Sieg heiling” out of a window and adding the words: “No tolerance for Neo-Nazis, fascists and racists.” The man pressed charges of slander, saying he was simply waving his arm, greeting some passer-by in the street; Zadic was found guilty of an offense under media law and sentenced to the payment of 700 euros. She has appealed the sentence, but should also have apologized to the man upon assuming office. What Zadic seems to misunderstand is that a victory on appeal will always leave a bad taste: she will be accused of winning because she is minister of justice. The smarter move would have been to accept the fine and move on. She also needs to understand that no one should be allowed to speak about an innocent person the way she did, accusing him of what in Austria is considered a criminal offense. Words do matter, Madam Minister, not only for those on the political right.

On the other hand, the Twitter mafia, most notably those on the (extreme) right, erupted in accusations of Zadic being a (closet) Muslim, which is unacceptable for reasons that remain unclear. As a result of death threats Zadic is currently under police protection.

During the recent election campaign, Zadic made a public visit to a radical Salafist mosque (video in German only) in the provincial capital of Graz, while she herself remained ambiguous about her religious affiliation. However, her self-imposed victimhood and her “migration background” are certainly conducive to furthering her own agenda and that of the Greens in general: eradicating online hate in addition to the political right.

To conclude, in the current political climate it is irrelevant whether or not she is a professing Muslim. Her actions count, and they lead to the well-grounded fear that she will act Muslim, favoring one side over the other.

6 thoughts on “Who is Alma Zadic?”