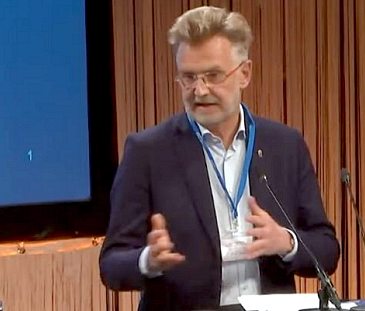 The following article is a useful follow-up to last week’s article about the Swedish government’s plans to use the military against its own populace when the Boogaloo (Swedish: bögalö) kicks off in Sweden. In light of last night’s post about Renaud Camus, it’s also a reminder that the systematic repression of dissent is widespread in Western Europe.

Many thanks to our Swedish correspondent LN for translating this article from Samhällsnytt:

Anders Danielsson: Regime-critical views can be likened to terrorism

It was at the National Conference of People and Defense in Sälen — the annual gathering of the security establishment in Sweden — that the former Director General of Säpo and the Swedish Migration Agency stated that there are “similarities” between terrorism and a form of democratic opinion which he called “psychological warfare”.

Anders Danielsson was Director General of the Swedish Migration Agency during the time of the 2015 migrant crisis as well as the head of a number of agencies before that, including Säpo. He is now a state investigator for the Psychological Defense Authority, which will be set up on Prime Minister Stefan Löfven’s order.

The official purpose of the new authority is to counter and combat so-called psychological warfare by foreign powers. However, Samhällsnytt has previously published internal e-mails from MSB [Myndigheten för samhällsskydd och beredskap, Civil Contingencies Agency] which reveal that staff at the authority sees opportunities to also fight internal actors with the help of a “psychological defense”. MSB Head of Unit Mikael Tofvesson wrote in an email that:

“My view is that regardless of an external threat, the development of a strong psychological defense also brings with it many internal gains for our democracy and freedom of speech. It feels like we’re heading in the right direction.”

During the last day of the conference in Sälen, Anders Danielsson gave a speech on the issue. He began by explaining the purpose of psychological warfare — and said it could be likened to terrorism, because its purpose is, among other things, to “cause decision-makers to make different decisions”:

“We have thought about it so clearly, and there are similarities to terrorism and terrorism legislation — where one targets a state… And the purpose is to cause a split in society, to cause the decision-makers make different decisions, to instill fear, to destabilize. There are similarities between a terrorist act and psychological warfare. And it can be the same methods — spreading rumors. We are used to it, what we read in the newspaper, fake news, etc.”

Further on in the speech, Danielsson believes that both the police, the security police along with other authorities and the media must work together to “do something” for in attempts to have an impact.

During question time, Danielsson receives a question from the moderator about what to do with “influencers located in the country”. To that question, Danielsson answers that the psychological defense authority should also operate in peacetime and that such “impact operations” are in a gray zone. He calls for vigilance against all actors who express opinions that are not approved by the establishment:

“We must not be so naïve as to think that it always comes from Russia Today, or Sputnik, or easily identifiable opponents, but it can also be that we, society, media are exploited as good idiots.

Danielsson also pushes for even more extensive censorship of the media in the future to block the opportunities for free formation of opinions:

“If I were a media manager, I would be pretty happy if someone were to knock on the door and tell me: You, you are now being exposed to something that is quite serious. Not just your newspaper, your company, but society, democracy or whatever it may be. These value words I use that are very important to us. So I would be grateful if there were anyone, but it is based on our trust in each other.”

Danielsson calls for more “openness” and “honesty” between the media apparatus and the state, which will “trust each other”. At the same time, he worried about how to maintain the democratic backdrop of an “open society” as repression increases.

Earlier, Samhällsnytt revealed that Patrik Oksanen himself carried out impact operations together with several left-wing extremists and people from the security establishment to link up the right and the threat from Russia.

During the panel discussion, the moderator again raised the question of what to do with people expressing their views in “media without responsible publishers, online podcasts, threads, social influencers and so on.”

“How do we get it? This is perhaps where the danger lies much more than in the Hudiksvall newspaper, or in Svenska Dagbladet, or in Sweden’s Television?” she asked the panel.

Then Olof Petersson explained that there are opportunities to legally act against these elements even within existing legislation:

“Then it is the crime bar, and then it is even easier to convict someone: it is rioting, insurrection, violation of civil liberties, high treason, instigation of war, espionage, an unauthorized position with secret assignment, negligence with secret assignment, treason, land fraud and rumor for the security of the kingdom. So we don’t have to come up with any new rules; this is carefully thought out,” he added enthusiastically.

These crime classifications should be relevant in war or in a “warlike situation”. Last week Samhällsnytt reported on FOI’s scenario with Typfall 5 describing a “gray zone” and assuming that the military is subject to MSB and can be deployed against the civilian population in the country.

According to Anders Danielsson, the investigation’s conclusions — which will also entail proposals for concrete measures that can be taken against dissidents — will be reported to the government on May 30 this year.