I’m not sure how “Boogaloo” would be spelled in Swedish — perhaps bögalö — but in any case the article below from Samhällsnytt discusses the Swedish government’s plans to use the military against the Swedish people when the Nordic Boogaloo finally kicks off.

Many thanks to LN for the translation:

In the media shadow on February 1, 2018, the same day that it was announced that Dan Eliasson would leave his post as national police chief and take over as director general of the Swedish Social Protection and Emergency Preparedness Agency (MSB), a fifth so-called case of “gray zone” was presented: Extracts and escalating gray zone problems. Something that can be used arbitrarily by the holders of power to ensure continued power, and that citizens with the “wrong” views on social development are silenced.

According to the Swedish Defense Research Institute, FOI, it is believed that “the threat that exists today against Sweden is more complex and diffuse than before” and that “the boundary between peace and war is not as clear, and this unclear state is often called the ‘gray zone’.”

Among the tools that one fears might be used in the gray zone are, among other things, “dissemination of disinformation” and “impact operations”. The new Typfall 5 [Scenario 5] will give “authorities and other actors in crisis preparedness and civil defense better opportunities to plan and practice gray zone problems.”

Recently Police Chief Anders Thornberg wrote to the government requesting increased support from the Swedish Armed Forces in a gray zone situation, which means that police and military can be deployed against the population in a case where the country is deemed to be in a state of quasi-war. The pastor and writer Helena Edlund has been looking more closely at the government’s new opportunities to push hard against the population.

But when ministers start talking about the gray zone situation, the Swede should take his earplugs out and wonder why the same government that has done its utmost so far to procrastinate and delay effective measures against terrorists and organized crime is suddenly very quick on the ball when it comes to the possibility of deploying military units against the civilian population?

Edlund believes that the same ministers and directors-general who say they cannot understand what the increase in violence is due to certainly know that everything is going according to plan. Typfall 5 is based on a course of events that reflects an escalating gray zone problem with considerable societal impact but where neither heightened readiness prevails nor are visible military means of force used. In such a gray zone situation, the Swedish Armed Forces are supported by civil defense, which is represented by the MSB in crisis situations. 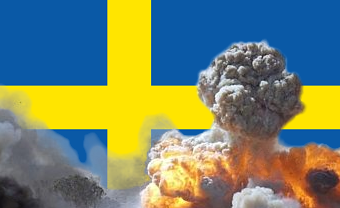 FOI Memo 6338 describes the situation, among other things, as follows:

The dissemination of propaganda by internet activists and alternative media, which is then sometimes reflexively spread further in traditional Swedish media, conveys a distorted picture of Sweden. The Swedish public is exposed to ambiguous facts and sometimes pure disinformation on issues that concern, among other things, order and security, migration and integration, traditional values, crisis preparedness and defense, and foreign and security policy. These information operations, which primarily utilize our open society’s information infrastructure in terms of the Internet’s social media and blogs, as well as indirect TV, radio and newspapers, have a certain negative impact on public confidence in government and politicians.

The documents dealing with how to eliminate the “threat” from alternative media are classified, according to Edlund. Memo 6338 addresses the crisis in health care and energy supplies. It also predicts widespread food shortages, failed payment systems and an flow of people escaping from cities to rural areas, but also from Sweden to other countries.

Sweden today is in a situation similar to the introduction to that described in Typfall 5, but despite this we must ask whether a formal call for a gray zone situation is the right way to go. Although a gray zone situation, according to the regulations, is to be handled within the framework of ordinary legislation, in practice it is possible to severely restrict democracy. A gray zone situation indirectly affirms that the population does not have access to correct information, which gives more leeway to the MSB in particular, under Director General Dan Eliasson, and the Ministry of Justice under the head of department Morgan Johansson. Since January 1, 2015, Säpo [the security police] has been directly under the Ministry of Justice, which is also responsible for Sweden’s emergency preparedness issues (with Minister of the Interior Mikael Damberg, who now supports the idea of a gray zone situation, as responsible minister).

Furthermore, Helena Edlund speculates that it is not inconceivable that the announcement of a gray zone situation could be the rescuer in the need for S / MP / C / L [Socialdemokratiska arbetarparti = Social Democrats / Miljöpartiet de Gröna = Greens / Centerpartiet = Center Party / Liberalerna Liberals] to eliminate the threat of a possible SD / M / KD [Sverigedemokraterna = Sweden Democrats / Moderaterna = Moderates / Kristdemokraterna = Christian Democrats] constellation in the parliamentary election of 2022.

In a situation where Sweden is in a state of quasi-war, with continued daily explosions and acts of violence, the election can be set with reference to the security situation and the pretext that one is “taking responsibility” while silencing critical voices.

Please note that I am not saying that it will of necessity be like this; I point out that the opportunity exists — and that an opinion-driven government can have the benefit of declaring a gray-zone position to secure its own place at the dinner table. Hopefully I’m wrong. But as long as the development is the one described in the report the ministers themselves have had access to for two years…

16 thoughts on “The Boogaloo, Swedish Style”