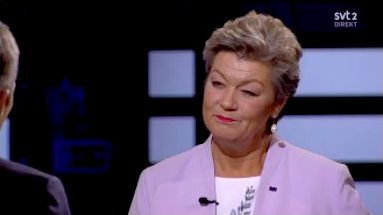 Sweden’s Ylva Johansson wants to compel EU member states to take their share of migrants. However, the means by which she would enforce this policy of “compulsory solidarity” are still unclear.

Many thanks to LN for translating this report from Fria Tider:

Sweden’s intended EU Commissioner Ylva Johansson (S) calls for “compulsory solidarity” among EU countries concerning immigration. But she is not very good at explaining the concept.

It was last week that Ylva Johansson appeared before the European Parliament.

She is the appointed Swedish EU Commissioner, responsible for EU migration policy. But her reply was so awful that she experienced a backlash during the hearing in the European Parliament.

Returning, she had no concrete answers to the questions, but wanted to come back later. It was not approved. She is now called “Come Back” Commissioner.

But on yesterday’s SVT [Swedish State TV] “Agenda” she had some answers. EU countries should be forced to “solidify” immigration.

“I don’t even know if I did anything wrong.” She said in the program that she was one of the few commissioners who were not approved. “This is a difficult portfolio. The parties are far apart and there are many emotions. My mission is to find a compromise.”

When asked how to get recalcitrant EU states to accept asylum seekers from the Third World, she replied that she should talk to all countries, pointing out:

However, she cannot explain exactly what “compulsory solidarity” means. She wants to “return” to it later, she explains. But it should not be voluntary whether one wants to be part of a common asylum policy. When program director Anders Holmberg asks her if it means that all countries must open their borders to asylum seekers, she cannot answer.