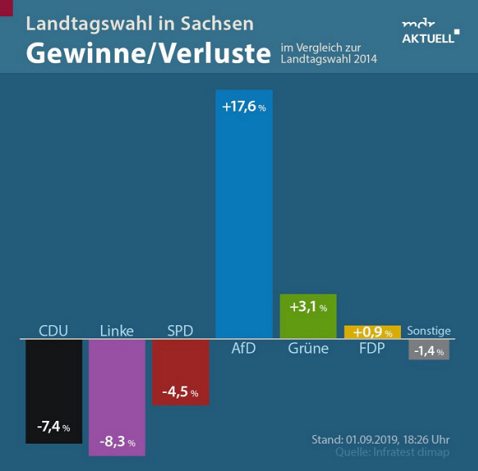 The AfD (Alternative für Deutschland, Alternative for Germany) scored major victories yesterday in local elections in two German states, Brandenburg and Saxony. The success of the party was not due to its surpassing the two traditionally dominant parties (the CDU and the SPD), but to its increase in voter support at the expense of those parties (see the graph at the top of this post to get an idea of the dynamic in Saxony).

The fact that the AfD could post these sorts of gains in the face of massive state propaganda, the hostility of the Lügenpresse (“lying press”), and being blatantly labeled as “Nazis” is evidence of the political shift that is currently underway in Germany. In a consensus culture such as that of the Bundesrepublik, the results are nothing short of astonishing.

In the following video Alice Weidel, the co-leader of the AfD, discusses these results with a hostile interviewer from German mainstream media. Ms. Weidel acquits herself with aplomb, and retaliates against her interviewer at least as strongly as he tries to sabotage her.