Seneca III sends his latest essay from the royal throne of kings, the sceptred isle, the precious stone set in the silver sea — the soon-to-be-Brexited Britain.

Since prorogation[1] was first mooted I’ve been trying to recall historic parallels with our current situation. Initially, as always, my mind swung back to the last days of the Roman Imperium — mainly, I think, because of the hallmark debauchery which came from moral and cultural decadence and which in turn gave birth to the same dangerous, unsavoury horde of false prophets, deviants, idiots and violent rabble that descend upon us now.

Both then and now cases of feverish mass derangement bereft of any logical foundations arose amongst peoples; all were aided and abetted by corrupt and power-hungry political demagogues. Both the Imperium and the UK were and are plagued with predatory alien tribes sinking their barbarian fangs into the body politic. In both, febrile mobs violent in act and rhetoric were and are on the streets daily and the descent into chaos accelerated. As Rome sank, so we are doing, but in this IT age much faster than in the past.

Blocking traffic by playing ‘Ring-a-Ring-a-Roses in the middle of the road — I kid you not! 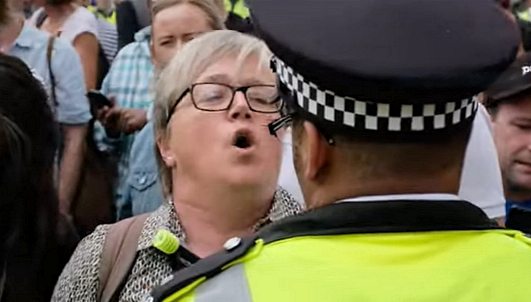 And Caroline Russell, a rather chubby member of the London Assembly representing the left-liberal Green Party, decided to give the Police a mouthful when politely asked to move along.

And was promptly arrested.

But with this knowledge of how things happen, how civilisations collapse, we do not need to follow Rome’s course into oblivion. We, the original indigenous masses, must regain our sovereignty, our right to determine our own future, to retake our lands for ourselves and ourselves only, to govern according to our ways. And we must ensure that the proto-tyrants of the Left and the EU Marxist-Globalist Theocracy together with their seventh-century foot soldiers never succeed in ethnically cleansing and subjugating us.

As it was at Waterloo and the Battle of Britain, this battle is ours to win or lose. With 59 days left going down to the wire it will be a damn close-run thing, so from those times past I offer two quotations.

On the night before Waterloo the Duke of Wellington and one of his aides rode through the lines of his soldiery who, to a man, were drawn from the commonalty and often referred to as the dregs of society or the criminal scum of Britain. They were eating, drinking and brawling around their campfires, apparently without a care in the world. Wellington is reputed to have turned to his aide and said, “I don’t know what effect these men will have on the enemy, but by God, they terrify me.”

A hundred and twenty-five years later after the Battle of Britain Churchill addressed a weary, bomb-damaged, wounded nation with these words:

“Now this is not the end. It is not even the beginning of the end. But it is, perhaps, the end of the beginning.” The war continued for another four years.

Obviously Hitler was not defeated by the Battle of Britain, only thwarted on one particular front; neither will Brexit be the defining victory for us — we will still have much to do, because the enemy is amongst us in vast numbers. So we must take heart and remember: ‘We the deplorables and the uneducated uninformed loony tunes as they choose to label us are legion. We carry in our genes thousands of years of memories, memories of war and peace, of settlement and of homogenous integration. We have abiding memories of how we have always stalwartly defended these islands from enemies within and without and those racial memories will serve to carry us onward and back into the light. We outnumber those of our new enemies within by a significant margin!’

Thus, even a completely clean Brexit will only create an interregnum, a hiatus in the battle between national democracy and Cultural Marxist-Globalists; that battle must continue all across the West until the latter are wiped from the face of the Earth and their memory consigned to some dusty pages in future history books.

Meanwhile, in uninformed quarters there is much talk of removing the malignant Speaker Bercow from office, but there is no formal procedure for removing a sitting Speaker of the House of Commons during the course of a parliament, and this is a deliberate constitutional omission.

The theory is that by making the Speaker effectively invulnerable to direct attack, the incumbent can oversee the debates of MPs without fear or favour, confident that no-one, especially the majority party, can remove him if they disagree with his rulings. The only moment when a speaker can face a formal challenge is immediately after a general election.

Speakers must stand for re-election after a general election. Traditionally, sitting speakers are not challenged, but the rules theoretically allow any MP to table an amendment to the motion of re-election. Assuming a speaker is successfully re-elected there is effectively no legal mechanism for his removal. That means the only option open to a Speaker’s critics is to force him to resign his post by persuading him that his position is untenable.

The least disruptive way of doing so would be through the “usual channels” of parliamentary business, an informal co-operation of Labour and Conservative whips to communicate the widespread feeling of MPs that the Speaker should go, but I doubt that would work in Bercow’s case as those that put him in (Labour MPs) and the Remainers for whom he is their useful idiot in a position of power would not permit it. Alternatively, more public measures could be employed to shame Bercow into quitting.

That means the only option open to Bercow’s critics is to force him to resign his post by advising him repeatedly that his position is untenable. That would see MPs tabling Commons motions formally calling for the him to resign. If he refused to stand down, that could force him to make formal rulings about whether such motions were in order.

And you can’t do that in the three days of parliamentary time left if Boris chooses to initiate the prorogation on 9th September, which option is provided for in the Royal Assent.

Concurrent with all of the above, I am quite disturbed by much of this talk[2] about the complete defenestration of the Monarchy. In the furore surrounding the latest revelations concerning Prince Andrew and Prince Henry (Harry) Charles Albert David Windsor-Markle, much is being said about the pros of doing away with our Constitutional Monarchy but nothing about the cons.

Such a drastic change would first entail finding an acceptable answer to the implicit questions, ‘What takes their place, a Republican system or a Dictatorship? Would we really want a Corbyn, an Obama, a Mugabe, a Soubry, a Hammond, an Abbott, a Khan or a Javid (either brother, or both) in such a position of power?’ 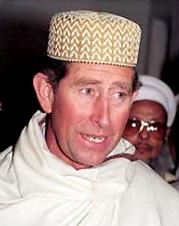 Would it not be a better idea to somehow skip the half-witted “Defender of all the Faiths”, the Clown Prince who would be King Charles III, and go direct to a seriously downsized monarchy under King William V?

I have no idea how this could be accomplished, if at all, but that I could live with if it came about. Difficult decisions lie ahead for all of us, but I am of a mind that this sort of problem is better fixed by internal restructuring rather than by being destroyed out of hand in the hope that something better will come along.

Yet, even a much smaller monarchy would require a dignified physical and constitutional presence if for no other reasons than the value of the global perspective, the suitability of certain properties for State Occasions and also for the preservation of our pride in these icons of our history and the structure of our democracy.

I would suggest that such a monarchy should keep in its ownership, on behalf of the nation, Buckingham Palace, Balmoral, Windsor Castle, Sandringham and the Tower of London (for which the nation may soon have a need of in the traditional sense) and return the rest of the Royal Palaces — plus Frogmore — and its vast estates, including the Duchy of Cornwall, in trust back to the people, with all revenues derivable therefrom going to the public purse and the upkeep of the properties, all with the legally binding proviso that avaricious ‘developers’, including the State itself, or the sale of them to foreign interests may never be allowed, nor would it be permitted to change any aspect of these historic lands and buildings.

That’s just for starters — a lot of clever, patriotic management would be required thereafter, something the current incompetent crew in the Palace of Westminster are quite incapable of, so we would need a thorough clean-out and full restructuring there as well. That, however, is an achievable objective, and of benefit to all. 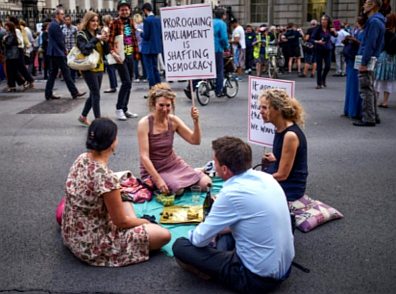 ‘Shafting Democracy’ with green grapes, wine and tofu? You really couldn’t make it up!

— Seneca III, in Middle England awaiting the outcome of this debacle with a sense of profound morbid fascination on this second day of September 2019.