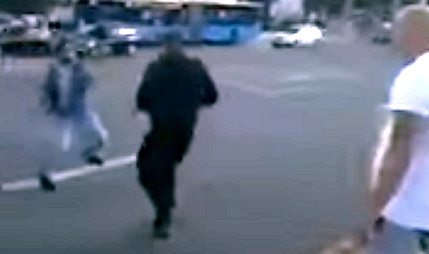 Last August three young men were attacked by culture-enrichers in the eastern German city of Chemnitz, and one of the victims later died. There were mass demonstrations in response the following week. An antifa group used a brief video of a confrontation that took place during the demos, and mischaracterized what happened in it, claiming that it showed a “manhunt” of foreigners by right-wing extremists. The media eagerly ran with the story — the arbiters of German politics and culture are Wessis, and are always ready to look down on Ossis as backward racists.

The government took its cue from the media. Even Chancellor Merkel chimed in to condemn the “manhunt” in Chemnitz. When the president of the Office for the Protection of the Constitution, Hans Georg Maaßen, said that the intelligence services had no indication that any such manhunts had occurred, he was pressured into resigning his position.

Now, almost ten months later, the government of Angela Merkel has finally admitted that it got its information from the mainstream media, and had never done any actual investigation of the allegations about a “manhunt” in Chemnitz.

So at last there is a clear chain of custody for the false narrative about what happened in Chemnitz: It was manufactured by a far-left antifa group, accepted and amplified uncritically by the mainstream media, and then adopted equally uncritically by the federal government of Germany. A member of the government whose sense of integrity required that he tell the truth was forced out of his office, and the government officially stonewalled any questions about the narrative for many months afterwards.

The two videos below concern the eventual debunking of the Chemnitz narrative. The first shows a brief speech in the Bundestag by Ulrich Oehme, who represents Saxony for the AfD (Alternative für Deutschland, Alternative for Germany). Mr. Oehme draws the chamber’s attention to the government’s deliberate propagation of the false narrative on Chemnitz, and demands that Angela Merkel step down as chancellor.

The second video is a report by Epoch Times that gives a detailed description and a timeline of events between August 2018 and June 2019.

Many thanks to MissPiggy for the translations, and to Vlad Tepes for the subtitling.

Video 2: A Timeline of the False Narrative

2 thoughts on “The False Narrative of a “Manhunt” in Chemnitz”