This fine fellow researched the whole tilting-at-windmills brouhaha — including all the internecine fighting that kept that Hunger Generation from succeeding. 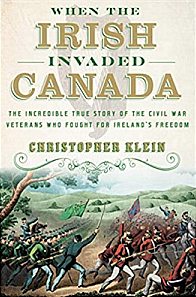 When the Irish Invaded Canada: The Incredible True Story of the Civil War Veterans Who Fought for Ireland’s Freedom

The thing is, those fighting Irish didn’t actually want Canada; they simply thought they could use it as a hostage to gain freedom for Ireland and they worked hard to make it happen.

The new Irish immigrants flooded to America in order to work for something to eat. Thus, they fought on both sides of the U.S. Civil War and then kinda, sorta joined forces afterward to secure Canada. The rationale was that if they held Canada hostage then the English would have to let much-poorer Ireland go in exchange.

Several things came out of the attempt. First, the British moved the capital further in from its border with America in order to make it more secure. Secondly, the overdue idea of founding a confederation of Canada’s territories became a reality much sooner than might have been the case otherwise.

‘Tis a fascinating book if you’ve the necessary DNA component which allows one to read gobs of stories about in-fighting and betrayal. Though he mentions it, what the writer doesn’t cover sufficiently, me thinks, is the reality of America’s desire for grabbing Canada its ownself. We had taken Texas from Mexico by then and bought Alaska from Russia. Bringing in Canada had great appeal for many Americans. For Canadians, not so much. They are too peaceable; being part of the rowdy U.S. would cause a profound unease. They weren’t called Loyalists for nothing.

Back during the Irish shenanigans, some of America’s politicians bloviated about the desirability of owning the whole hog, but those who did have an eye on the North wanted someone else to do the dirty work. There was little dirty work the Irish weren’t willing to do to get the English out of the Emerald Isle.

A recent video of the author’s talk in Lawrence Massachusetts about this bit of history is below the fold.

Most of Ireland is finally free, but real liberty didn’t last long. They owe their souls to the EU now. It’s too sad for words.