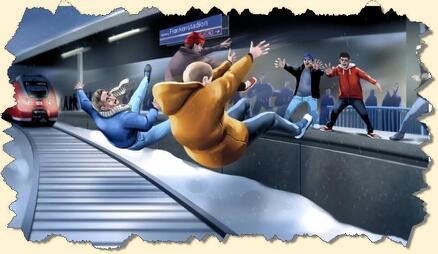 In the wee hours of last Saturday morning, three German teenagers were pushed onto the tracks of a station in Nuremberg, directly in front of an approaching train. Two of them were run over by the train and killed instantly. The alleged perpetrators of the act were two slightly older teenagers of non-German ethnicity.

Despite the fact that the killers’ actions were deliberate and intentional, the mainstream media obfuscated what happened, saying that “the boys fell onto the tracks after a scuffle.” The event was described as a “tragedy”, rather than an atrocity. And the murderers were referred to simply as “Germans”, because they were born in Germany.

In the following video, an author and former police inspector named Tim Kellner describes what actually happened. Many thanks to Nash Montana for the translation, and to Vlad Tepes for the subtitling:

The article below from Politically Incorrect (also translated by Nash) goes into more detail about the cover-up by the Lügenpresse of what really happened in Nuremberg:

Nürnberg: A Turk and a Greek push three 16 year old Germans onto the rails — two are dead!

By MICHAEL STÜRZENBERGER — This went through the social networks on the Internet last weekend like a wildfire: At the Nürnberg S-train station Frankenstadion, three young boys from Franken were pushed onto the rails in the night of Friday to Saturday. Two of them were run over by the oncoming train and killed. Every citizen with enough common sense immediately asked themselves what specific cultural identity the offenders might have. The Relotious-infested mainstream media spoke deceitfully of “Germans”, in order to cloak a migration background. Further drivel about “accident” and “tragedy” was put out there: the three 16-year-old’s “fell” onto the rails.

But BILD on Monday morning uncovered the bone-hard truth: The murderers, or at least the manslaughterers, who pushed the three German guys onto the rails, were a Turk and a Greek who were merely born in Germany. The highly interesting article, from which the picture here on my article comes, is viewable on BILD with a monthly subscription of €3.99.

We want to know where these criminals come from who keep making our country less and less safe. Because most often they are Muslims, and that is not really a surprise when you know the ideological regularities of their “religion”. A Turk and a Greek don’t become automatically “German” just because they were born here. It’s exactly the same reason why a cow that is born in a horse barn doesn’t automatically become a horse. While we don’t want to compare people with animals, the principle is the same. A migrant only then becomes a real German when he internalizes our identity, our culture, and the values of our country.

The two victims, Luca and Frederic, were two real Germans. They came from Heroldsberg, which is eleven kilometers northeast of Nürnberg, and they were very popular in their hometown. Last Friday night the two high school students were visiting the Nürnberg dance club “Nightlife”, and around midnight they wanted to ride home on the train. At the train station, after meeting a third friend, they got into an argument with the Turk and the Greek. According to the police, the fight started for a ridiculously inane reason, which led to a highly aggressive reaction by the two offenders.

Bio-Germans do not normally react like this. It is much more the explosive mentality of Orientals, frequently and distortingly called “southern”, which is already amplified through their Islamic hatred against all non-believers, that leads to such extreme acts of violence. The Turk is with almost absolute certainty a Muslim. And since the Greek is his friend, he was either strongly influenced by his friends’ attitudes, or he was a Muslim himself as well. After all he could be a West Iraqi Turk, or he could be Albanian with Greek citizenship. 500 years of Ottoman Islamic colonial rule has even today left devastating tracks in Greece.

On December 20th, 2007, it was also a Turk (Serkan A.) and a Greek (Spyridon L.) who almost beat to death Bruno N., retired Director of the Hermann-Frieb School in Schwabing, at the Munich Arabellapark train station, simply because he indicated there was a no-smoking policy on the train. While beating him they called him “filthy German”. After their trial they smirked and showed everyone the middle finger. [Translator’s note: They were given 12- and 8-year sentences.]

According to BILD, surveillance video of the crime scene in Nürnberg proves that there was pure intent to push the three onto the rails, since the train had already been approaching the station at roughly 80 km/h. Since that train usually does not stop at that station, it ran over Luca and Frederic at full speed. The boys didn’t stand a chance, and they were both killed instantly. Their friend could barely make it back out.

In the media, the two offenders have been unanimously described as “Germans”, for instance at Focus:

“As a spokesman for the police explained, two 17-year-old Germans are responsible for three youths falling onto the rails shortly after midnight on Saturday morning.”

As well as the Nürnberg News, which respectfully called the first offender who was arrested a “young man”:

“The police have arrested one suspect. The suspect is a 17-year-old German, the police spokesman said Saturday. The young man is currently being interrogated.”

Once it was clear that there were two suspects, they further tried to hone the impression of their being indigenous:

“Meanwhile, two 17-year-old suspects have been arrested, both of whom also come from the county of Fürth.”

Though the notorious downplaying is based on the words of the police spokesman, as a journalist one should have the duty to investigate whether there was a migrant background. But that very obviously is not part of the interest in the Relotius-press. BILD in this case is the exception to the rule. Here is the picture of the BILD front page:

All other media played down these brutal murders in a most scandalous manner. The Süddeutsche Zeitung is of course leading at the top, and it openly hallucinates that a fight between the youths had just reached a “tragic end”. Three 16-year-olds were “falling” on the rails and were “caught by the train and run over and killed”. The two 17-year-olds supposedly should be held “responsible” that “their three rivals fell from the platform onto the rails”. One could literally feel how the chief-censor Prantl wielded his mighty pen as he tweaked the timeline of events.

One could speak of intentional deception of the public if the Alp-Pravda didn’t mention that the district attorney had issued a warrant for arrest for manslaughter, and “malice” was assumed. Furthermore, they cite investigators who at first left it open whether the suspects had pushed, beaten and kicked the three boys.

Even the Bavarian Rundfunk is of the opinion that the three Germans “fell” on the tracks:

“On the night of Friday [early Saturday], the two youths got into an argument with two other 17-year-old youths at the Nürnberg S-train station Frankenstadion. All in all three 16-year-old youths fell onto the train tracks during the argument.”

On late Saturday morning, BR Online described the double murder in its video report as an “accident”, in which “three men” after the fight “fell onto the train tracks”:

The Franken television channel even titled the murderous events in its TV report as an “S-Train Disaster”. After a row the two victims “fell onto the train tracks” and were “killed by the approaching train”.

The CSU mayor of Heroldsberg, Johannes Schalwig, spoke in all earnest of an “accident”. But this was at least manslaughter, if not murder. The entire town with its 8,500 citizens has been in a state of shock since Friday night. Especially the sports club TUSPO Heroldsberg, where the two victims have played soccer ever since they were little boys. Furthermore, one of the two was a member of the Catholic church community St. Margaretha, where he worked with other young kids, and the other one played contrabass in a music group.

Originally on Saturday, a benefit event was planned for the acquisition of artificial turf for the soccer field, but of course it was cancelled, and an ecumenical worship service was instead held for the two dead 16-year-olds. About 500 citizens came. Merkur reported:

“It is hard to put into words. We are in shock, says the chairwoman of the Heroldsberg gymnastic and sport association, Stefanie Piegert. The 16-year-olds had played soccer there ever since they were little, most recently in the A-youth. They were great players; they were nice, friendly people. The players of both adult teams were dedicated to helping the younger players deal with their grief, Piegert said.

“On Saturday evening the association cancelled a benefit event for the financing of artificial soccer field. Instead about 500 citizens visited the ecumenical worship service. Especially the older brother of one of the victims had found deeply moving words, says the chief Major Johannes Schalwig (CSU) in a report of the Nürnberg news (Monday). In front of the town hall grieving people laid down lights, flowers and photos of the deceased. The 16-year-olds were very loved, says chairwoman Piegert. They went to the school in Eckenthal and Nürnberg. One of the two played the contrabass in a band.”

[Translator’s note: The headline at the MERKUR link which tells the story of the service says “TWO YOUTHS KILLED BY S-BAHN: EYE WITNESSES TRAUMATIZED — POLICE BEGIN LOOKING FOR CLUES”. I have no words.]

The Bavarian minister of the interior Joachim Herrmann demanded via BR:

“It is terrible. It has to be made very clearly that we must counteract these acts of violence.”

[Translator’s note: the BR article titles the article “S-Bahn Drama.” AFTER they already knew that it was NOT “drama”, but outright murder. I have no words.]

Most of all, our politicians have to counteract and educate about the dangers of Islam. And they has to put a stop to the mass invasion of these Mohammedans, even if in this case the offenders were born here. But all the old once-conservative parties are now collectively blaring up and down with the Greens and the Reds this crack-brained welcoming-culture tolerance lyre.

And meanwhile Nürnberg also becomes more and more “colorful”. The families of Luca and Frederic are by no stretch of the imagination happy about this. And neither are the citizens of nearby Heroldsberg. Only completely left-retarded full-fledged idiots can still be happy about the full-blown Mohammedization of our country.