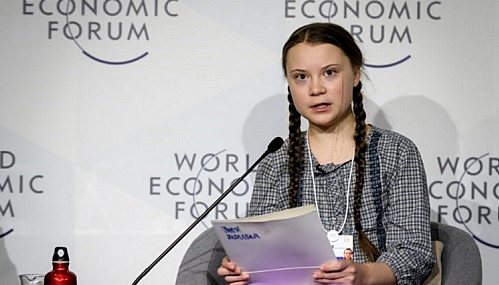 A Swedish teenager named Greta Thunberg has gained international fame by starting the “school strike” movement to stop “climate change”. She even spoke at the recent World Economic Forum in Davos.

I suppose you could say she’s the Ahmed the Clock Boy of the environmental movement — a photogenic kid guaranteed to tug at the heartstrings of Progressives who get all mush-brained about the Puir Wee Bairns.

Nash Montana, who translated the material below, sends these extra details on Greta Thunberg:

Who is this girl, who is supposedly 16 years old but looks and talks like she’s four? She who is now being hyped up as the spokesperson for thousands of school-ditching kids? She is the product of her parents and of an eco-communist media world that has almost destroyed her early on in life in order to use her:

“Greta Thunberg was born to the Opera singer Malena Ernman and the actor Svante Thunberg. According to her own statements when she was 8 years old she became interested in climate change and she engaged in environmental protectionism by keeping the lights off in her house. Later she decided not to fly anymore. At age 11 she became depressive and started to self-harm and quit eating due to her anxiety about the climate. She then was diagnosed with the Asperger’s syndrome, OCD, and selective mutism. Later she engaged herself publicly against climate change.”

The translated article from Apollo News:

A student’s look at Greta Thunberg: How the climate-changers have instrumentalized a girl

The 16-year-old Swedish student Greta Thunberg has become the symbol of a young person who doesn’t want to be cheated out of her future. But she is a sick child who is being instrumentalized by the green elites in a perverse way.

The figurehead of climate change, at least according to the media, is Greta Thunberg. The by now 16-year-old Swedish girl has for weeks been in the spotlight. With her campaign “school strike for the climate” she has (supposedly) inspired millions of students and encouraged them, to demonstrate for “better climate politics”. Young people are fighting for a political issue: We here at the LJB do the same. But nonetheless I have to exercise criticism here, especially now, as I just became of legal age, that I am a young adult.

To pull off a political movement as a student is quite a lot of work. We experience this every day. For me, each week is a new balancing act, to write for Apollo while at the same time be prepared for final exams and other school requirements. But I get it all done — and mind you, without my just walking out of school on a Friday. Maybe I could organize that: School strike for Liberty. [He writes “Freiheit”, freedom, but I think in this case he means “liberty”… but it could be debated, I guess. —translator]

No doubt most people who emulate Greta and go to demonstrate believe the message they are representing. And I certainly don’t want to open that can of worms about climate change, because for that I have neither time nor space. Let’s just say it this way: A lot what so-called “climate activists say” can be thoroughly doubted. And still the narrative of the impending climate apocalypse is being pushed through the mainstream media as if there’s literally no tomorrow. Should we therefore blame these kids when they believe this stuff? If at all, then only conditionally.

Great Thunberg was born in the year 2003. The student has been diagnosed with Asperger’s syndrome, OCD, and “selective mutism”, which is a psychological condition in which patients suddenly stop speaking. At age 8, according to her own statements, she began to be interested in climate change. This led her into a full-blown depression at 11 years old, including refusal to eat.

Let’s be honest here: a girl that because of a political position develops full-blown depression at 11 years old is not really suitable to be the mouthpiece for such a campaign. A girl like that needs help. Meanwhile she is advocating for very radical positions: “For me most things are black or white,” Thunberg wrote in The Guardian (which is a classical example of a borderline disorder). In plain text: Completely and utterly, or not at all. And for Greta, the choice is clear: Completely and utterly. So capitalism has to fall as a consequence. She calls for a boycott of Black Friday and demands basic changes in consumption and lifestyle. As is more often than not the case, anti-capitalism and “environmental protection” again go hand in hand. We do not know whether she was co-opted by the political Left or whether she is just used much more as a poster child.

One time I met a group of young people at the main Cologne train station who were holding a political demonstration. I decided to talk with them, and to ask them questions. I found out who announced the demonstration: A circa 18- to 19-year-old woman in an Antifa pullover. Also one Antifa flag was lying very visibly in front of the demonstrating group. And the answers of the youths were as naïve as they were shocking: 14- to 15-year-olds proclaimed in all seriousness carefully thought out sentences such as: “Yeeeeah we want for instance not so many plastic bags” as one reason for their demonstration. Pearls of wisdom such as “The economy shouldn’t be deciding and dictating everything; rather the common good should be advocated for”, were dangerously mixed with statements such as “I think the entirety of commerce (traffic) should be completely reconstructed […] everything just needs to be completely changed.” Individual mobility has to go. Or: “Maybe we need to ask the question whether capitalism is still suitable, or if we should rethink because of climate change.”

These children are being abused by anti-capitalists in the name of environmental protection. When the photos of the “school strike” from last Friday show 12-year-old children, it begs the question of how they even got there. Did their teachers send them there? And so, a thousand times over, what has happened to Greta Thunberg in plain view of everybody is happening to children everywhere. Because Greta, too, is being abused and instrumentalized by the climate-changers and the perpetual saviors of the world in a simple, moving way. Greta Thunberg is a girl who is in a perpetual state of fear due to the propaganda of the climate changers. A state that has led her into depression and self-harm, and there is no one who is willing to really help her.

“I don’t want you to be hopeful. I want you to feel the fear I feel every day.” This is statement by someone who is just not OK.

On a related note, Nash adds the following translated anecdote from the comments at Politically Incorrect:

A colleague of mine told me she had a family discussion today at the breakfast table with her two kids. They were “school striking” yesterday, Friday. For the climate.

Later that evening when she asked the kids “How long are you going to take to pull this off?”, they answered, “Until your generation leaves a better world for our generation. A healthy world. One in which we can live again.”

So Sunday morning, in agreement with her husband, they decided to give in to their kids’ demands. The mom told her kids that they had thought about it long and hard, and that they had recognized that things needed to be changed.

In order to improve the climate, the family will sell both diesel cars, and only buy a brand new car. Which means that from now on, both kids have to either ride the S-train or use their bicycles to get to school and to their activities.

In order to avoid radiation, or even to reduce it, she is ready to completely relinquish all cell phones. There’ll be only one cell phone left for the entire family, and no flat rate. That saves a lot of money.

The house telephone also will not be wireless anymore, they’ll go back to corded telephones, in order to avoid “dangerous exposure to radiation”.

From now on the buying of clothes will be greatly reduced in order to minimize the exploitation of Asian laborers and child labor, and in order to reduce the carbon footprint. Therefore no more new clothes in trendy hip clothing stores. All clothes will now be bought in secondhand stores. There are a plethora of those in Berlin, after all. The fact that they won’t be as fashionable as new clothes will have to be accepted in the name of climate change prevention.

Frozen pizzas, burgers, other fast food, too, and beverages in plastic bottles as well will be gradually banned from the house from now on.

There will be more cooking at home. The fresh groceries will be bought at the local market. They don’t have to be organic right away, but the goal is to strive to become completely organic. The difference in prize for organic products will be compensated through the reduction in the household allowance and the kids’ allowance.

My colleague and her husband understand that up until now they made one mistake after another. Therefore they have put all decisions to improve the climate and to make the world a livable place again into their kids’ hands.

Therefore she asked the kids that by Monday morning, they’ll come up with a plan of action by means of which everything can be implemented as quickly as possible.

And as a bonus, she added regular school-ditching can be included. However there will be no written and signed excuses by the parents. Neither from the dad nor from the mom. Since this is part of the revolution, the kids will have to regulate that themselves.

The next family meeting is Monday morning, 7 a.m., in the kitchen.

For now neither of the kids have said a word about any of it. But there’s still time, after all.