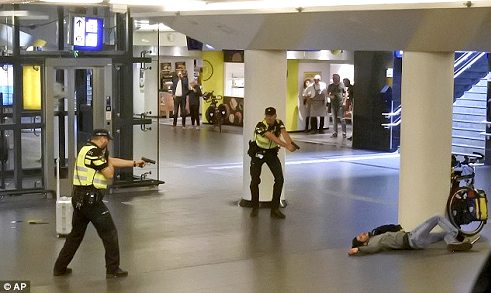 As reported in last night’s news feed, a “youth” (now identified as Jawed S.) stabbed two people in the main train station in Amsterdam before he was shot and wounded by police. As the article below reports, young Jawed is a “German” and not a “Dutchman”.

The article doesn’t include the news that the two lightly-wounded victims were American tourists. For more on that development, see for example this BBC report.

JIM is not mentioned in any of these articles, but the Dutch authorities have been forced to admit that Jawed S. had a “terrorist motive”. Are we surprised?

Many thanks to FouseSquawk for translating this article from De Telegraaf:

AMSTERDAM — The 19-year-old man who stabbed two people on Friday at Amsterdam Central Station is Jawed S. His first statements show that he had a terrorist motive. The municipality of Amsterdam announced this on Saturday.

“Of course, the research is still in full swing to discover everything around this suspect and his motive. This involves intensive contact with the German authorities,” according to the municipality. At the request of Dutch judicial authorities, the German police conducted a search in the suspect’s home in Germany.

“Among other things, multiple data-storage devices have been seized and will be investigated. The suspect will be brought before the examining magistrate next Monday. He is under all restrictions, and that means that the suspect has no contact with the outside world except with his lawyer.”

Dick Schoof, the National Coordinator for Counterterrorism and Security (NCTV), reacted directly on Twitter to the news that Jawed S. said in statements that he had a terrorist motive for his act. “As announced by the local triangle, the investigation of the incident in Amsterdam shows it was based on a terrorist motive. This objectionable act unfortunately fits in with current threat assessment.”

The highest threat level is used when there are concrete indications of a new attack, but according to the NCTV this is not the case now. “The threat level remains at 4 on a scale of 5. We are following developments. No reason for extra measures.”