Well, we knew sumbuddy had to be blamed for The Donald’s Islamophobia. Why not the creator of Refugee Resettlement Watch? Others put the onus on Trump’s dementia (here we go again) for his push-back against Islamic jihad. But, no, a jornolisto at The Atlantic, a monthly magazine, has found the real culprits and one of them is the eeeevil Ann Corcoran.

But, you know what I’ve noticed about left-wing writers like the Rhodes Scholar Peter Beinart is that whenever they call me out, they don’t even have the decency to mention RRW or my book! 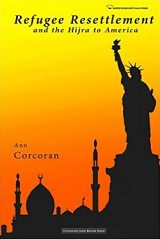 Because it makes it harder for their readers to find my work. And they fear, horror of horrors, that some of those readers might actually agree with me on a few things!

So come on, Mr. Beinart, you call yourself a Yale-educated journalist, a journalism professor no less, so why no link when you attempt to abuse me?

From Peter Beinart at The Atlantic:

Early on Wednesday morning, Donald Trump retweeted three graphically anti-Muslim videos—one entitled “Islamist mob pushes teenage boy off roof and beats him to death!,” the second entitled “Muslim Destroys a Statue of Virgin Mary!” and the third entitled “Muslim migrant beats up Dutch boy on crutches!”—posted by British First [sic] leader Jayda Fransen, a woman convicted last year by a British court of harassing a woman wearing a hijab. [By the way, the videos Trump re-tweeted were real, not fake, and those who were depicted in them were Muslims making Muslims look bad. They weren’t actors! —ed]

None of this should come as a surprise. Trump has been associating with anti-Muslim bigots, and parroting their arguments, since before he launched his presidential campaign. In May 2015, a month before he entered the race, Trump journeyed to Iowa to speak at a forum hosted by Frank Gaffney’s Center for Security Policy (CSP), a think tank that specializes in in arguing that devout Muslims cannot be loyal Americans because Islamic law, or Sharia, violates the Constitution. During his speech, Trump mentioned that he had been chatting backstage with “some experts,” one of whom was a woman named Ann who was “so good, she was telling things that you wouldn’t even believe.” Two months earlier, Ann Corcoran had published a CSP report [This is where a legitimate journalist would have added a link.—ed] that urged Americans to “speak up against the opening of more mosques in your neighborhoods,” to “say no” to requests for “special Halal food section[s],” and to oppose efforts to require “local government to pay for a Muslim cemetery.” Citing Corcoran, Trump fumed that “if you come from Europe, you’re European, you’ve done great in school, you want to come, you want to come to the United States, you can’t get in, but if you’re Muslim, you can get in.” According to the Huffington Post, Trump would go on to cite “research from the Center for Security Policy dozens of times in press releases and speeches during his presidential campaign.”

Continue reading as he goes on to blame a whole bunch of people for educating the President on the most significant and serious issue facing America since its founding.

Truth be told, I love it when a ‘journalist’ goes off like this.

I become more energized because, as one of my dear friends remarked about this article, they are letting us know that their heads are exploding!

“I must admit that I actually laughed when I read this article. The heads of the Left are EXPLODING!!! They have nothing, NOTHING but the old bromides and scare tactics to fall back on. You can hear the fear in this article!”

It’s been over ten years that I’ve written about refugees and sometimes I think it’s time to retire. Then along comes Peter Beinart and I’m energized and ready for another year! 2018 here we come!