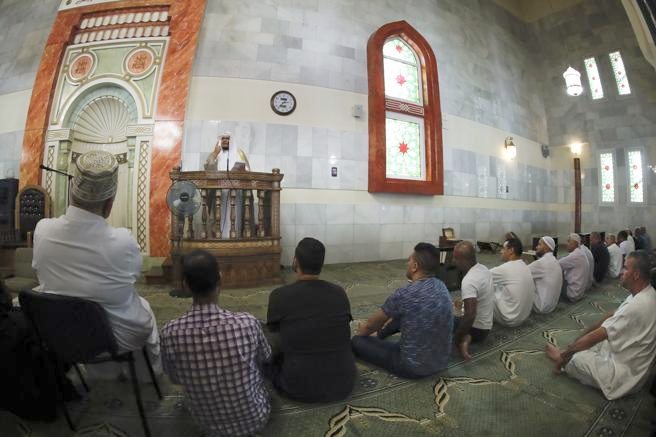 You can’t get good imams anymore, at least not in Catalonia. Such seems to be the general thrust of the article below, which describes some of the arguing and finger-pointing in the wake of last month’s jihad terrorist attacks in Barcelona.

One of the mujahid involved in the Barcelona attacks was an imam, so the conclusion is that Spain needs more and better-trained imams. Those imams should be recruited abroad and brought to Spain. And (surprise!) the Spanish government needs to do more for Muslims if it wants to prevent attacks in the future.

Many thanks to Pampasnasturtium for translating this article from La Vanguardia:

Why is the control of imams so difficult?

After the attacks in Barcelona and Cambrils the debate has opened up again about the need for a greater control of Muslim religious leaders, but it won’t be an easy task

[Photo caption (not shown): A group of Spanish imams pose with their certificates after a training course at the Spanish Council of Islamic Religious Associations]

After the attacks in Barcelona and Cambrils in which sixteen persons died at the hands of a cell of attackers commanded by Abdelbaki Es Satty, the imam at a mosque in Ripoll, a debate is being held about the need to set up more rigorous controls over those who are the spiritual leaders at Muslim faith centres. This debate is not new; it shows up again every time there’s a problem related to the Muslim community. Nevertheless, there are several factors that make it difficult to turn words into actions.

To start with, there’s the fact that Islam, unlike Christianity, doesn’t have as hierarchical a structure or so defined a chain of command. Every community chooses its imam, who may come from one of several different schools of thought. It is about a “more democratic” process, says Mohamed Iqbal, a spokesman for the Path Of Peace Islamic Centre, who manages the biggest prayer room in Barcelona right in the middle of the Raval neighbourhood. But it’s also more chaotic.

Iqbal states that when they look for a new imam, their community demands to know from which school he comes, and once this person provides all the paperwork required, they carry out their own investigations themselves. But he recognizes that if everyone were as rigorous as they are, “half the mosques would have no imam.” And he blames this on the difficulties of bringing properly-trained imams into Spain, due to restrictive immigration laws.

According to what he says, Spanish embassies abroad make it very difficult to hire imams in [their place of] origin. Which compels Spanish mosques to rely, to a large extent, on staff that have never studied at any renowned Koranic school. They’re in many cases volunteers who, despite their good intentions, often don’t possess the training necessary to be the spiritual leader of a community.

Juan Ramón Puig, the president of the immigration sub-committee of the Catalan Council of Lawyers, claims that Spanish embassies abroad have restricted the cases in which they accept hiring in the place of origin. Puig points to a start date for this phenomenon, and it’s the start of the economic crisis. “Before that, many permits were issued; now they’re very strict.” This affects all immigrants, but indirectly, this could have had an effect on the arrival of properly trained imams on our shores.

Nevertheless, there are other groups within the Islamic community that don’t believe the solution is to bring better imams, but that advocate instead for their religious leaders to be trained in Spain. Such is the case made by the Spanish Council of Islamic Religious Associations, which represents more than five hundred Islamic communities. Its president, Mounir Benjelloun says he’s aware of the “lack of imams” in Spain and of the difficulties they have in obtaining work permits, but considers that the discourse of these religious [leaders] and their environment “are not the same” as those of Spanish Muslims.

[Photo caption (not shown): A woman walks within Ripoll’s mosque]

Benjelloun explains that, facing the lack of infrastructure to provide the training within Spanish territory, since 2006 their organization has been “presenting projects” to the government to help “a new generation of imams trained in Spain” come into being. But he states that despite the Islamic community’s efforts to control the training of imams, they haven’t had enough support from public administration. “The state hasn’t invested a single buck,” he says, and he believes the reason is because politicians “are not interested in us as a community.” Benjelloun warns that “Muslims are being left to their own devices.”

“We have undertaken several initiatives to train the imams. The last one we undertook involved signing a collaboration agreement with the Islamic University of Rotterdam, and over three years we have carried out the complete training of thirty imams.” Benjelloun regrets that after the attacks, the Muslim community is being blamed when the state has done nothing to support them. “If you invest zero euros, it’s normal that there will be no results,” he claims. “For years we’ve been demanding that Islam and Muslims be treated not in a privileged manner, but rather only in the same way that the Catholic Church is being treated. We can’t be asked for more than what we’re already doing”, he concludes.

The Islam expert and anthropology professor at Rovira i Virgili University Jordi Moreras also points out that the lack of support of institutions could also be related to disagreements within the heart of the Islamic Council of Spain, the organization representing Islamic religious communities that interfaces with the government. But he believes that no public bodies have known how to handle the training of imams, and he indicates that this is a “cyclical” debate.

“It happened back in 2004. At that time Jose Antonio Alonso, first Home Secretary for Zapatero, said more control had to be exerted over imams, and the Partido Popular [then in the opposition — translator] jumped on him, alleging unconstitutionality.” On the Catalan level, Moreras remembers that as early as in 2002 the “first modest attempts to train imams” were started, but he believes they were laid out in the “wrong” manner. The first training, he states, was Catalan language classes, and says that “it wasn’t very effective.”

[Caption: Muslims pay attention on Friday to imam Hussam Khoja at the Madrid Islamic Centre’s mosque, the largest in Spain]

Later, during the tripartite [Catalan coalition government of Socialists, Left and Greens, 2003/2006 —translator], religious references were included. “But it was very curious to see the way a non-Muslim person was trying to tell a Muslim which Islam was the correct one”. The courses, which didn’t manage to engage too many religious leaders, were controversial because they were given with the explicit support of the government of Morocco. “The Catalan government failed to see the interests that the Moroccan government could have had: it was a way to keep internal control of their collective,” he says. This opened up a new period of “subcontracting” of the training of imams. Moreras points out that even the Autonomous University of Barcelona signed an agreement to train imams, but it didn’t succeed.

The failure of these initiatives, according to Moreras, meant that the Catalan government ended up without the tools to make “at least an assessment of what the current situation of imams is in Catalonia.” “Now comes the hurry, the anguish… but we aren’t becoming aware of the reality of the communities. The ambiguity with which we position ourselves when confronting the matter of controlling the imams makes you think there are other things we haven’t taken into consideration.”

And while the debate concerning the control of the imams begins a new cycle, the Islamic community of Path of Peace [Islamic Centre] might have found a middle way. Mohamed Iqbal explains that they have sent two young men raised in Catalonia to train as imams at the universities the movement runs in Pakistan. “When they come back, the idea is that they will train people here,” he explains. As Moreras indicates, the reality of Islam in Spain is “self-management in a precarious mode that ends up having consequences.”

10 thoughts on “Why is the Control of Imams So Difficult?”