The asylum-seeking process has brought with it a large increase in crime all across Western Europe. The surge in violent crime is disproportionately caused by migrants of certain ethnicities, and especially of a certain religion.

This fact is obvious to anyone who’s been paying attention to recent events in Europe, even without any hard statistical data to back it up. If you import a lot of Somalis, Afghans, and Moroccans, you’re going to get a lot of violent crime. This isn’t rocket science.

What makes the following report unusual is that the data comes from official Dutch police statistics, and that it was published in a major MSM outlet. Evidently the situation has become so dire that the Gutmenschen can no longer ignore it.

Many thanks to Dr. Van Helsing for translating this article, which was published in De Telegraaf this past summer, based on statistics from last year:

Breaking the law with impunity

Asylum seekers who commit crimes and are caught are not always prosecuted. Some are released without penalty. This happens in the hope that they can be deported sooner, but that hope is often in vain. It is one of the many revelations that emerges from piles of police documents about crime by foreigners. Binders with police reports on criminality among foreigners are in the possession of this newspaper. The documents are full of surprises. Police officers are unequivocally aware of the size of the problem of asylum seeker crime, and they know which groups are primarily responsible. […] De Telegraaf learned that police keep track of criminality committed by foreigners and requested copies with an appeal based on the Public Information Act. Police first denied that they had such information, but finally had to turn it over. Thousands of pages of information at the national level — the documents from local forces have not yet been counted — seem hard to miss, one would think. There is even a special “task force” for this matter within the police force. The documents for 2015 and 2016 show that crime by asylum seekers has shifted over time. People from safe countries, who have zero chance getting a residence permit, are gradually becoming more and more responsible for crime committed by foreigners. In the first ten months, two thirds of suspected asylum seekers came from a safe country. They mainly committed shoplifting. One foreigner was even suspected of 13 crimes. Asylum seekers from a group of countries considered “safe countries” travel through Europe. According to the police, there are indications that they know where the best asylum shelters are and where conditions for foreigners are best. They quickly head out once deportation threatens. These migrants move from one land to another. They create so many problems that the police decided to keep weekly reports on the crimes by this particular group in the course of 2016. These reports show that the police are looking for ways to cope with this big problem.

Police officers express frustration when they describe that some of these asylum seekers from safe countries are not even being prosecuted after being caught by police. From a survey in November 2016, the National Task Force found that this experience is shared by multiple police branches. Such cases are filed and the suspect may go. The idea behind the release is, according to the police report, that when someone’s asylum application has been rejected, deportation can be faster if there is no criminal case underway. But deportation often does not take place or takes a long time. As a result, the foreigner can stay in the Netherlands while the police know about his crimes. The department of the police dealing with foreigners writes about this at the end of 2016: “The question is whether forgoing prosecution is desirable if the suspect cannot be deported and thus resides freely in the Netherlands. This gives the impression that committing crimes is not punished until someone is deported.” The office of public prosecution [Openbaar Ministerie — OM] declined to respond.

It is not the only example of the police being powerless. Again and again it turns out that asylum seekers from safe countries consider the asylum shelters as a kind of base from which they can conduct “raids”. In December of last year, the police received a report from the military police who where doing night shifts at an asylum shelter. A line from the report reads as follows: “In addition, he stated that EVERY NIGHT there are a number of asylum seekers who leave around 3 o’clock.” Where exactly they were going the police didn’t know, but the military police did see that they entered the nearby city of Delfzijl. The asylum seekers from safe countries sometimes seem to be part of organized crime groups. The police report that Eastern European migrants steal on order. For example, a product is stolen in large numbers, like brushes for electric toothbrushes. Completed order lists are also found.

Which of the different groups causes the most misery changes with time. As 2016 progresses, crime is clearly increasingly committed by Moroccans and Algerians who suddenly massively moved to the Netherlands. First, there were still other groups, especially Eastern Europeans such as Albanians, who, according to the police, account for a lot of the crime. Statistics have been produced which makes clear which nationalities are most likely to be arrested by the police.

Georgians are currently number 1. They were held 8.9 times more than the average asylum seeker in a period of eighteen months. By the end of 2016, however, the police saw that North Africans took the lead in crime. Reports form the end of 2016 say: “The men who originate in Morocco were responsible for most criminal offenses last week. In addition, men who originally come form Algeria and Tunisia show up as suspects.” The hotspot for this criminality by people from safe lands is, according to the reports, the Northern part of the Netherlands.

Even when it comes to other crimes, such as creating nuisance in the shelter or harassing women, Moroccans are number 1 at the end of 2016. The police report in detail about the incidents that these strangers from safe countries cause in the asylum shelters,. Often alcohol and drugs are involved. Police officers describe one tactic of the criminals. “North Africans keep a razor blade in the mouth,” begins this explanation. “In some North African countries they learn to hide a razor blade in the cheek during incidents. When needed, the knife is released between the teeth and bends to the opponent to inflict damage to the neck and face. This has happened a number of times over the past few months.”

Aggression by asylum seekers from safe countries in the shelters is also common: even before the peak in the arrival of Moroccans, 200 cases were registered per month. These are not always crimes, but the police are kept busy. “They know how to stay within the limits of the law, so it does not always result in a criminal offense, but police effort is necessary.” 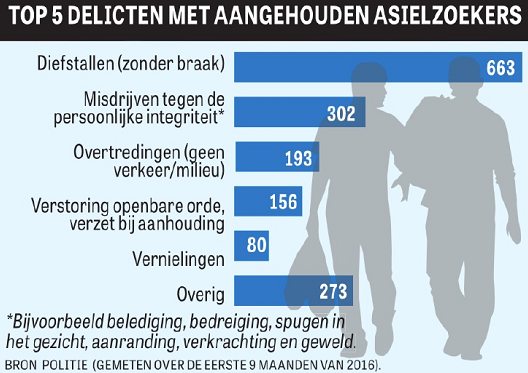 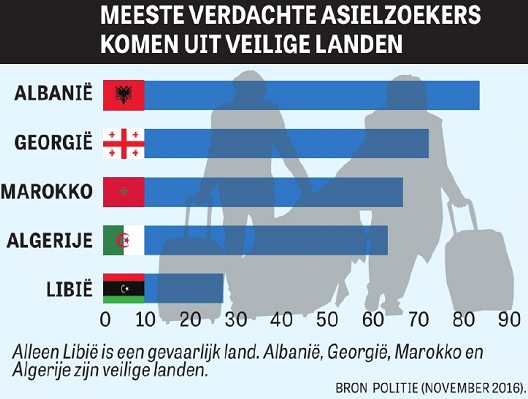 Caption: Most asylum seekers that are criminal suspects are from safe countries (November 2016)

5 thoughts on “Culture-Enriching Crime Statistics From The Netherlands”