In Amsterdam on Saturday, a vehicle ran into a crowd of pedestrians in front of the main railway station, injuring five people. Police say the incident had nothing to do with terrorism, but rather happened because the driver felt unwell, due to the fact that he was a diabetic and was nearly in a diabetic coma.

Our Dutch correspondent H. Numan sends these somewhat skeptical observations about what happened. 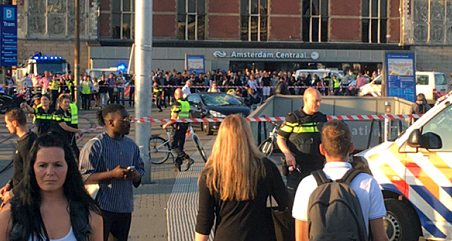 On Saturday June 10 a car suddenly drove into a crowd on the square in front of the central railway station of Amsterdam.

Five people were injured; nobody was killed. The Amsterdam police, which you should know for their predilection for burqas, almost immediately reported that this was just an unusual accident. No sudden jihad. The driver was unwell. That’s all. Move along. Nothing to see here. However, there is a lot to see. Only those are things the police would rather that you not know.

I’ve been to Amsterdam many times, and can assure you that parking cars on the square in front of the railway station is not possible. Only official vehicles (police, firefighters, ambulances) or those with permission (maintenance work) may park there. That’s the thing that tipped me off immediately. The whole area is a no-parking zone. Has been that for decades. Any car trying to park there is immediately approached by the police.

The perpetrator was a 45-year-old man from Amsterdam. When approached by officers he suddenly sped away. If you feel unwell, that is very unusual behavior. Only a full day later did the police come up with the diabetic coma theory. Who is this ‘man from Amsterdam’? As you know, when sometime bad happens that doesn’t promote mohammedanism, every reference that might tip you off is always removed. Had this man been a real Amsterdammer, his first name would be mentioned. Jan H. or Piet Y, for example. Not a thing here. Not even after two days. Might his name be Mohammed Y, or possibly Osama B L? We don’t know. But we can guess, can’t we?

I’m not the only one who doubts the sincerity of our burqa-loving police force.

Several witness told Radio AT5 that the car approached the tram stop at high speed. One witness said: “I saw the car stopped on the rails, and thought, ‘If an attack is going to take place, this is the moment.’ The driver was addressed by two officers and then raced away. I think it was on purpose.”

Another witness: “I was walking on the west side of the station. A friend shouted ‘Run! Run!’ when the black Peugeot came toward me on high speed.”

“Two officers approached the car. The driver appeared to be irritated. He was talking on his phone, and sped away. We saw people flying through the air. When the car sped away from the officers he increased speed. I am absolutely certain the driver was not feeling unwell. I think he made two attempts to kill.”

Only on late Sunday afternoon did the police come up with the diabetic theory. As I am diabetic myself (fortunately, the lowest possible level), I can assure you one doesn’t react irritatedly to people when you’re about to pass out. Unless you’re a mohammedan, of course. But then, they are always irritated by the presence of infidels. Diabetic or not.

The police issued a statement on Sunday evening: They aren’t sure how this accident happened, and are investigating it. They think the man became unwell due to a low blood sugar level. If anything comes up, they will report it. Only if it supports this flimsy blood sugar theory, of course. They did admit the man has a criminal (?) record, for something minor (?). For what, we don’t know. Normally the police wouldn’t mention that fact if the record only contains parking citations or spitting on the sidewalk.

At this moment mohammedans are celebrating their annual ‘starve yourself to death, even it kills you’ month. They call it ramadan. Religion precedes health. Diabetics are required by doctors to eat regularly. They are explicitly forbidden to participate in starvation binges. Every year doctors warn about the dangers for diabetics of fasting in ramadan. Which is always ignored by most Mohammedans. After all, we don’t want sensible advice from infidels, do we? Allah knows best!

In short, it is almost certain this was a Mohammedan carmageddon attack. A successful one too, as five people were injured. To paraphrase the great bard: “A jihad attack by any other name would stink just as bad”.

35 thoughts on “Carmageddon in Amsterdam”