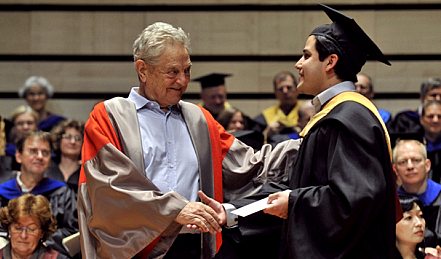 Last week the government of Hungary under Prime Minister Viktor Orbán became the first Western nation to take official action to interfere with the operations of George Soros: the Hungarian parliament passed revisions to an existing law that may well force Mr. Soros to close down his Central European University (CEU) in Budapest.

Predictably, demonstrations were staged in downtown Budapest to protest the action against the CEU. Thousands of foreigners were imported to take part in the demonstrations. As reported by CrossWare:

The numbers were from 40,000 to 80,000 and that was the Soros org’s own guesses. Normal estimates place it at around 50,000 but nobody really counted. Everybody agreed on the conservative side that a lot of foreigner were there.

A video of the protest is here.

CrossWare has translated two articles about the Central European University, and includes this introduction to provide context on what is happening in Hungary:

We can hear some ever-strong squealing for the umpteenth time from liberal circles in Hungary. They are currently in “The sky is falling” mode because the “fascist dictatorship” of Viktor Orbán and the governing party Fidesz allowed the passage of a law that will “attack all humanity” and “forbid education forever” and “destroy all higher education” and close George Soros’ Central European University (CEU), which is led by the Canadian liberal Michael Ignatieff who “desperately and heroically” fights against the “evil oppressive regime”…

OK, so let’s examine the facts now. In 2004 when the Liberal-Socialist government was governing [governing is a code word for pushing the country into debt and poverty], Soros made a grand deal with the Liberal Education Minister of the time. His school, the CEU, was issuing both Hungarian and US diplomas. Since the beginning of the mass migration (invasion), Soros’ NGOs have constantly been attacking the Orbán government, demanding that it open the borders and begin accepting unlimited number of Muslim migrants for its enrichment.

Because Hungary is key to the Balkan migration routes, and because with its resistance Hungary showed a “bad example” to the other Western countries, Soros and his backers have invested a lot in so-called “civilian” organizations, and it seems that most of his activists come from the ranks of the CEU students and teachers.

In 2018 there will be elections in Hungary, and the present government — very wisely — decided to deal with this unlawful influence before the campaign starts. As a democratic country, they cannot just ban those NGOs and other institutions, so instead they just try to close the loopholes the previous Liberal/Socialist government had provided for Soros. The new law simply states that all schools that award dual diplomas must have a campus in the home country — in this case in the United States. Soros’ CEU does not have a school there…

Of course the activists are forgot to mention that more than a hundred foreign schools are operating in Hungary, including three other US schools, and none of them had problems. The law states that such school have six months to open a campus in the home country, or receive a special exemption made via a state-level contract (so the home country authorities can be aware that an organization gives out diplomas from their state), or they must cease issuing foreign diplomas. The schools can still operate, of course.

The Liberal screaming is also a preemptive attack. The second law the Hungarian Parliament is preparing will force “civil organizations”, most of them Soros NGOs, to disclose their financial sources (essentially the same as the Foreign Agent Act in the USA) to clarify who is behind those organizations. No organization will be banned of course, but you will hear otherwise in the near future from hysterical Liberal lunatics.

I believe Soros is also afraid that with Hungary he will lose more than just influence in this tiny country. Since Orbán’s strong stance against immigration and the building of the fence, more and more people all around the world are following what he has to say. If Hungarians successfully oust Soros, more will follow. The Soros gang is now trying to stop the first domino from falling…

Below is CrossWare’s translation of a post from the conservative investigative blog Spiler:

Some in Fidesz would say the CEU is the officers’ school of the liberal world, but the CEU and the liberals state that Soros’ university provides world-renowned training and scientific results for Hungary. So in order to establish a more objective picture we decided we would get a random sample of the diploma theses at the CEU. You all can decide for yourselves whether these look like real scientific dissertations or political pamphlets.

Here are the 10 diploma theses:

The CEU has only social sciences, economics and liberal arts majors. The above examples just reflect the years 2015-16. For anyone interested in earlier papers, you can find more in CEU dissertations.

Here’s more on the CEU from another blog (bolding by CrossWare):

Why is the defense of the CEU — this undercover agent-training facility — now the most important cause of those couple of thousand mouth-karate protesters who are always frightened about tyranny and “fight for democracy”? Why the CEU? Because it is the last bastion of George Soros’ remaining interests.

Soros suffered an unpleasant loss the United States. Slowly the air is leaking out of his protests, which were organized and financed to overthrow the new president. His people are burned out, and they do not want to expose themselves — even for money — to the increasing antipathy of society. Trump is not snuggled into the Washington political elite, and to feel the “love”, he frequently kicks the Soros-Obama-Clinton clan. George Soros became a public enemy in the USA.

With that Soros lost most of his influence in the European Union too. While Clinton looked to be the contender, he got a polite reception, and they listened to him in Paris and Brussels, but even then they needed to make a great effort to show a friendly face while listening to Soros’ wilder and wilder migrant-importation schemes and suggestions. After the fall of Clinton, the doors are closed for Soros even in Western Europe.

There is nothing left for him but the Eastern and Central European region — the Balkans and the post-Soviet states. Here the command center is the CEU.

Some days ago an article was published in which they blamed the Hungarian government for agreeing to Putin’s request to discredit the CEU. While it is a fact that Putin hates Soros and his gang, the Russian authorities are still strong enough to take care of agents trained in the CEU.

From various foreign political sources we heard that in an unofficial form multiple Balkan state and many post-Soviet states’ diplomats signaled to Budapest that citizens educated in the CEU, when they return home, undertake subversion, activism and propaganda activity against existing governments and openly work to advance the goals of Soros-paid organizations and businesses.

The individuals who received their diplomas from the CEU, practically return to their countries as agents whose tasks include subornation, disruption of governments and finally the creation of political conflicts and civil war, so Soros and his collective of US business interests can rob the target country.

Which is what happened in the Ukraine, where intellectuals trained in the CEU deliberately drew the country into a civil war. In the past couple of years the “Western-friendly” leadership for political support and free thievery handed over a significant portion of industrial, agricultural and [mineral] wealth of the country.

The same screenplays await more post-Soviet republics, as Soros’ agents are already training or have been trained in Budapest as for their destabilization.

We must openly state: under cover of scientific activities, virtually rock-hard [spy] agent training is occurring in the CEU.

This is what was kicked apart by the Hungarian government. Rightfully so! Because Soros never even respected his original homeland. Just the opposite! He has done everything in his power to throw our country into chaos so he can fish in troubled waters.

Over the past seven years he did not shy away from anything; he had no inhibitions: he tried anything, he funded anything to create disruption in the running of the country.

Now he has set thousands in front of Parliament to protest for an institution which is only a burden for Hungary.

Soros is fighting for the last region of influence left to him. And he is exactly like a cornered rat…

26 thoughts on “Spook-Training at Soros U”