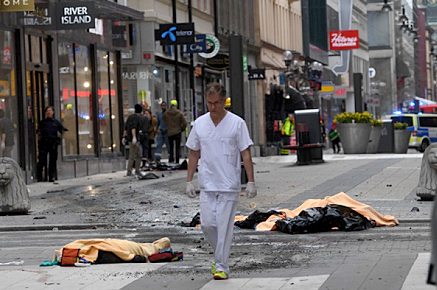 One of the victims of the April 7 terrorist attack in Stockholm was a young Belgian woman who was a devoted “refugees welcome” type of woman. Ava Lon, who translated the following article, says: “There — another Refugees’ Little Helper received her note of appreciation.”

But it’s even worse than that. The Belgian woman loved the “refugees”, so she didn’t deserve to die. However, if the victim had been an “Islamophobe” instead — a member of the Sweden Democrats, say — then she would have deserved to die at the hands of an angry refugee. Whose anger, as everyone knows, was simply the result of being denied asylum. And had nothing to do with Islam.

There’s no way to know for sure what the media spin would be, of course. But eventually it will happen — at some point a supporter of Marine Le Pen or Geert Wilders or Frauke Petry will be killed in a terrorist attack. Wait and see; my bet is that there will be a clear — albeit subliminal — message in the media: They had it coming.

The translated article from Les Observateurs:

Stockholm attack: One of the victims was a Belgian committed to helping migrants

One of the victims of the Islamist attack in Stockholm was a 31-year-old Belgian mother.

Not only the loving companion of the leader of the same musical company. Not only mom of their 18-month-old son. She was also a psychologist in the service of the Foreigners’ Office and was very committed to helping asylum seekers.

On Friday, she became the first victim of the Uzbek terrorist, an unsuccessful asylum seeker, who hit the crowd by swerving with a truck in Stockholm. On Friday, in the wake of this dramatic terrorist attack in the heart of Stockholm, Foreign Affairs had no knowledge of Belgian victims. But this must have changed when M.’s family, from Halle, in Flemish Brabant, sought to make contact with Foreign Affairs because M. had gone there to visit a friend, and since the attack, her anxious family had no news.