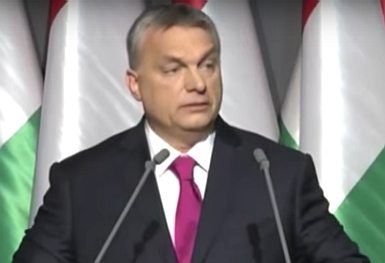 The following video contains the full speech given a few days ago by Hungarian Prime Minister Viktor Orbán, reviewing the events of 2016 and looking ahead to 2017 and beyond. It is one of the best speeches by a European political leader I have ever heard.

Mr. Orbán talks frankly and lucidly about the major crises that are currently bedeviling Europe, including the “refugee” crisis and the heavy-handed behavior of the European Union towards the nations of Europe — which it considers its vassal states. The prime minister focuses on the primary overarching issue, which is the attempt by trans-national organizations to impose global governance on nation states. He describes the current “populist revolt” that has arisen to resist the globalists, with Brexit and the election of Donald Trump being the most recent major examples.

The entire speech is 44 minutes long, but it’s well worth listening to. The middle third is mostly on Hungarian domestic issues, but the rest will be of great interest to non-Hungarians. It’s possible that Vlad may want to excerpt smaller sections and make separate videos, so suggestions are welcomed on the times where the relevant break-points should be.

Many thanks to CrossWare for the translation, and to Vlad Tepes for the subtitling: