K. from Germany has translated two articles about recent Islam-related news in Germany. One of them concerns the appalling fact that a Muslim woman at the Migration Board is in charge of deciding the asylum cases of Middle East Christians. The other — no less appalling — is about the jailing of a man who posted political satire on Facebook.

The first article is from Politically Incorrect:

A Christian family from Iraq, who feel victimized by Muslim terrorists, asks for asylum in Germany. At the Federal Office for Migration and Refugees (BAMF), of all things they are facing a woman in an [Islamic] headscarf, who is to decide whether the threats by radical Muslims are grounds for asylum.

It is hardly surprising that the Mohammedan rejects the Christians’ asylum application. Because — while we would like to learn otherwise — out of not a single mosque have we ever heard anything about prayers of Muslims against the oppression of Christians by their radical brothers in faith.

If this is true, then it shows, that Muslims worldwide don’t care about the persecution of Christians by perverted IS butchers and other brutal Islamic groupings, and it is to be feared that they either don’t take it seriously, play it down, or clandestinely delight in it. Almost ten years ago, when it was still allowed, the Merkur wrote the following about the totally normal attitude of Muslims and their religious leaders towards Christians:

“Sheikh Mahmood, former director of Al Azhar University in Cairo, one of Islam’s highest religious authorities, goes even further: ‘Christians are like a malicious and infectious disease. Muslims have to treat them unjustly, despise them, boycott and treat them harshly to force them to adopt Islam.’ It cannot be made more clear, how much Islam shapes the Muslims’ way of thinking and acting in all areas of life.”

So, the fact that an adherent of this creed gets to decide the fate of Christians who are despised and hated by this creed, virtually against her own people, would be comparable with SS men who were required to rule about the departure of Jews from Nazi Germany.

Correspondingly, the employment of a member of this Islamic “religion” against potentially real refugees seeking protection can never produce neutral and unbiased decisions. This Muslim woman gets to decide the fate of Christians in a German federal office, today, tomorrow, every day. This is not criticised by anybody.

This is basically because Islam, against all better knowledge, is assumed to be “peaceful” and not the hateful ideology that has more than just one problem with other religions. This axiom of the peaceful Islam may no longer be doubted in the politically correct world. The only one who took the liberty to express gentle criticism, Wolfgang Bosbach [refers to the first article linked above in Die WELT], consequently does this very, very carefully:

“If these Christians ‘have to describe their victimization to a headscarf-wearing Muslima, then I can understand the applicants’ worrying that the decision about their application could possibly turn out not to be entirely objective and free of prejudice,’ says the interior expert.”

The man knows his limits in these times. Anyone who really wants to stand up for law and order, against arbitrariness on the part of authorities, against biased employees in the BAMF, and for real refugees, can do this strongly, but please in appropriate friendly tone via this address: [BAMF official contact info]

The second translated piece is from mmNews.de:

by Michael Mross [not signed, assuming authorship by site owner]

Which expressions of opinion are still allowed in Germany — and which are not? Because he put false quotations in politicians’ mouths, a Facebook user has been arrested for incitement. 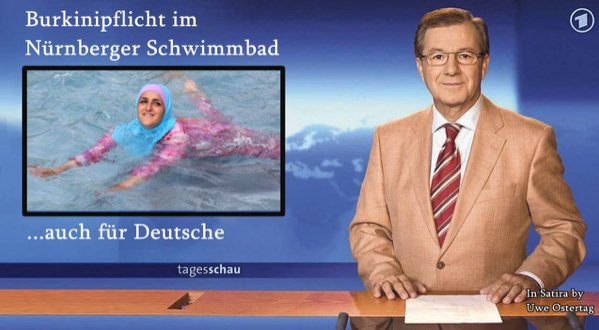 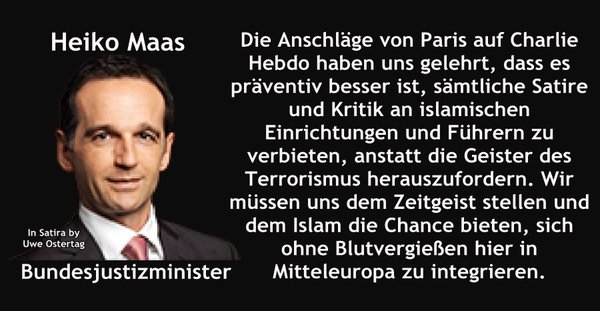 “Heiko Maas, Federal Minister of Justice: The attacks on Charlie Hebdo in Paris taught us, that it’s better for sake of prevention to forbid all satire and criticism of Islamic institutions and leaders, instead of provoking the ghosts of terrorism. We have to heed the signs of the times and offer Islam a chance to integrate itself into Central Europe without bloodshed.”

While German justice in some cases is conspicuously lax with criminal offenders, it treats others with implacable harshness. And the German press is jubilant about the enforcement: German Internet Hater Jailed.

22 months: this is the time Uwe Ostertag now has to serve for public incitement. His crime: He put false quotations in politicians’ mouths, although they were marked as satire. His collages spread on Facebook with lightning speed; they were shared thousands of times. Topics: Refugee politics, EU, the deficiencies of democracy. Now they put a stop to it. In certain areas politics doesn’t know any humour, and Uwe Ostertag will regret this bitterly now.

The attorney general asked for even tougher punishment. An aggravating factor was that Ostertag resisted his arrest. He allegedly held two knives in his hand and threatened suicide.

This raises the question: What is still allowed in Germany and what is not? Is satire only allowed in certain areas?

The Ostertag case hence is the next step of escalation in the restriction of freedom of expression. Satire, too, has to be politically correct.

Böhmermann escaped becoming the first case only by a hair’s breadth. But he was lucky and was protected by public opinion. After all, it was only against Erdogan, whom one is free to think of as [excrement] in the lowest possible language with approval of the German press.

But the fun stops at mocking German politics. Islam, too, enjoys wildlife conservation.

Nothing happens in Germany if you say Christianity is a canker (also in Titanic). But for opining the same about Islam, a conviction for public incitement is due.