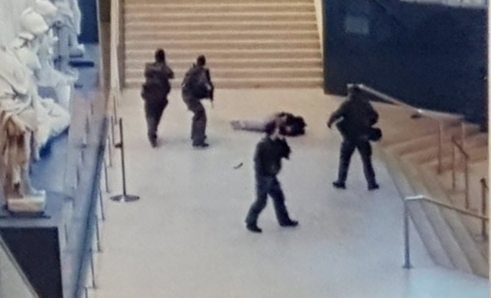 A mujahid carrying a machete attempted a jihad attack on soldiers near the Louvre today in Paris. The attacker was shot five times by a soldier. Not counting the perforation of the jihadi (who is receiving treatment for his wounds in the hospital), there were no serious injuries.

When they can’t get guns or bombs or trucks, the preferred weapon for mujahideen is a machete or a kebab knife (the latter, which is readily available to Muslims in the West for obvious reasons, is often mistaken by witnesses for a machete). France obviously needs to tighten its machete control laws to prevent further senseless tragedies like this one. Or even institute kebab control, although that would be racist, and thus unlikely to be implemented.

Below are excerpts from the The Local:

Machete attack on soldier near Louvre was of ‘terrorist nature’

A French soldier patrolling at a shopping centre at the Louvre museum in Paris shot and seriously injured a machete-wielding man on Friday who yelled “Allahu Akbar” (“God is greatest”) as he attacked security forces, police said.

Hundreds of tourists were confined to secure areas of the world-famous art gallery in central Paris after the attacker was shot five times around 10:00 (1100 GMT) in a public area inside the complex.

President François Hollande called it ”a savage assault” and reaffirmed the state’s determination to fight terrorism.

One soldier was “lightly injured” and has been taken to hospital, while the knifeman is in a serious condition but is still alive, security forces said. He was undergoing an emergency operation at Georges Pompidou hospital.

“I think this was an attack by an individual who obviously intended to cause harm,” Paris police chief Michel Cadot said, saying the fact that the man shouted “Allahu Akbar” suggested a “terrorist nature” to the assault.

Two backpacks carried by the assailant were checked by bomb disposal specialists at the scene and were found not to contain explosives.

A second man whose behaviour was “suspicious” has been arrested, Cadot said, without giving further details.

Soldiers and armed police have patrolled tourist attractions and other sensitive areas like shopping centres ever since the Charlie Hebdo and Jewish Kosher store attacks of January 2015.

12:26 — Attacker in a critical condition

The latest reports in the French media say the attacker is in a critical condition and is undergoing an operation. He was hit by at least one of the five bullets fired by the soldier.

The Ministry of the Interior have also confirmed a woman was arrested at the scene, but they say it is not clear what role, if any, she had in the attack. The ministry says we have to be “cautious” at this stage about suggesting she was involved.

11:21 — French PM describes it as an attack of a “terrorist nature”

Prime Minister Bernard Cazeneuve said the attack was “clearly of a terrorist nature”.

11:18 — Attacker wounded in stomach and taken to hospital

Latest reports from French police say the attacker was wounded in the stomach rather the legs as first reported. He has been taken to the Georges Pompidou hospital.