Folkhemmet — “The People’s Home” — was the term for the cradle-to-grave Swedish welfare state coined in the early days of the Social Democrat Party. The events of recent days seem to have made the People’s Home put its blanket over its head and scream, “Stop looking at me!”

The unraveling of the “Trump is lying about Sweden” meme makes you wonder how bright those dim bulbs in the MSM really are. Did they really think that drawing attention to the consequences of Multiculturalism in Sweden was a good idea? Did they have no idea that their Trump-mocking would be rapidly eclipsed by the grim reality of the Swedish banlieues? Were they totally unfamiliar with the continual and routine violence that has accompanied the cultural enrichment of Swedish cities?

Are they clueless, or what?

Matt Bracken sends his own meme on Modern Multicultural Sweden: 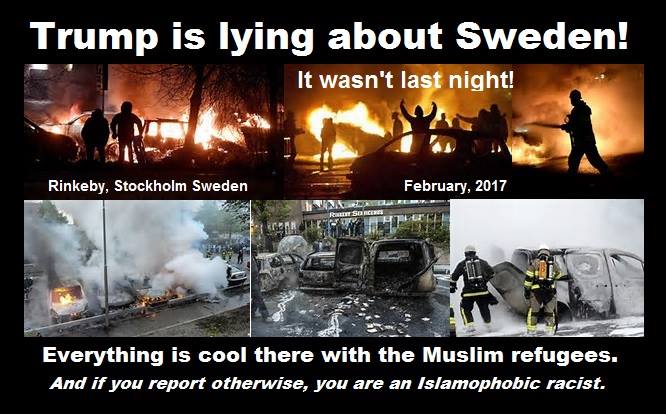