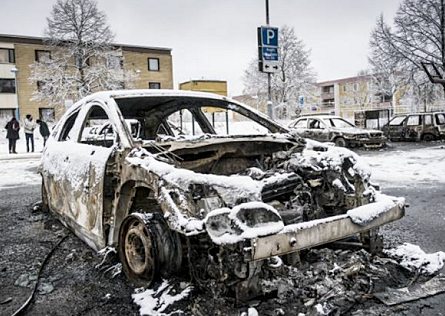 Contrary to what the Swedish government and media would have the rest of the world believe, there is an epidemic of culture-enriching violence in Sweden, and numerous no-go zones that police will not enter except in large numbers with plenty of weaponry and armor.

On Monday night, as if to emphasize that Donald Trump was right, a violent riot led by “youths” broke out in Rinkeby.

FouseSquawk, who translated a report on what happened in Rinkeby, includes this introductory note:

Below is a translated copy of Svenska Dagbladet’s report on Monday night’s riots in the Stockholm suburb of Rinkeby. The area is overwhelmingly immigrant and mostly Muslim. It is considered one of Sweden’s no-go zones.

Rinkeby Residents Tired of the Violence
“Their families should be expelled”

Violent riots, cars on fire, stone-throwing and looting. After the unrest in Rinkeby on Monday night, demands by residents, SvD speaks with police, tougher penalties and deportation.

“I fled from my homeland once. I will not run away again,” says a man who has lived in Rinkeby more than twenty years.

[Photo caption (not shown): Shattered windowpanes at the Rinkeby square]

Discontent ferments among the residents in Rinkeby. People meet in the square to talk about what happened Monday night. Meanwhile, burned-out cars are removed from the parking lot, and broken glass is swept away. Reporters stand in line to interview the man whose pizzeria was smashed. He has to answer the same questions over and over again. “What happened?” “How does it feel?”

According to the police, it was around 8 o’clock on Monday night when a patrol was attacked by a masked crowd in Rinkeby. Police say the incident occurred in connection with ban intervention.

Police fired for effect. They shot simply for show

The situation was seen as so threatening they didn’t see another way out, said Nicolas Andersson, the local area manager, at a Tuesday press conference.

Two hours later the nighttime unrest flared up. Several cars were set on fire and shops in the area were looted. According to TT, a shop’s proprietor was beaten and a DN photographer who went to Rinkeby to monitor the events was attacked and beaten by several people. According to police there were up to eighty young people involved in the riot.

“I have lived here 27 years and the last ten have been a catastrophe. I don’t know what is needed to stop this. I am not a politician, but I know that something is missing here,” says a woman in the city center, who, as well as the others SvD spoke to, wants to remain anonymous. She is not afraid. She and her family have never suffered anything in Rinkeby. “But on the other hand, I have daughters and no sons,” she says.

Several Rinkeby residents SvD spoke to are tired of the violence in the suburb. But they do not want to move from Rinkeby. “I have fled from my homeland once. I will not flee again”, said one of the men. Dejan Stankovic, head of Rinkeby Kistas Prevention Unit, says that the district responded directly to what happened. Youth leaders went out Monday night to try and calm [the situation]. On Tuesday, they were out in the schools and talking the youths.

With SvD present, the city leaders come to the city center to answer questions, and they are preparing for the evening to deploy extra resources if necessary should they see a continuation [of the violence].

A woman at the city center who has lived for 27 years in Rinkeby thinks that a lack of employment is the biggest problem in the area.

“All these young guys who just stand there. Look at them. Why aren’t they working? They need to be doing something and think about something instead of making trouble,” she says.

Three older men meet in the square. They look at the broken windows and shake their heads. They have had enough, they say and demand tougher (measures). But they are in disagreement over the causes of the violence.

“Its about bad policy,” says one of the men and is immediately interrupted by another man who protests against the description.

“ We know which ones they are. We also know who their leader is. It is these people who need to be locked up”, says one of the men in Rinkeby about the riots.

They welcome the decision about video surveillance in the city center and think that there is a way to get the assailants when nobody dares testify against them. But the men we talk to also demand tougher sentences and more police.

“The police should have more powers. We should toughen the punishment and expel those who commit serious crimes. Not only them, but also their families. I think, honestly speaking, it is the only way. They are not afraid of prison. I’d bet my life that it would be quiet after three expulsions,” says one of the men, and the others nod in agreement.

They talk of the drug trade in the subway and how people don’t dare go out after ten o’clock in the night.

“They sell drugs like candy and there are many Swedish youths who come here just to buy (drugs). All this is done quite openly. I see all this from my window,” says one of the men.

He also emphasizes that it is about a criminal clique and that most of the youth go to school and take care of themselves.

None of the men want to move from Rinkeby. It certainly matters that it is hard to find housing elsewhere, but it’s also that they do not want to flee again.

“I fled from my home country one time. I will not flee again,” says one of the men.

Given the statement days ago by Donald Trump, for which he has been derided both by Swedish leaders and the US press, this incident underlines the fact that he is absolutely correct. He spoke awkwardly, but was not referring to any terrorist attack in Sweden “last night”, rather to a Fox interview with the journalist Ami Horowitz the previous night describing the overall situation that flared up again Monday night.

15 thoughts on “A Ruckus in Rinkeby”