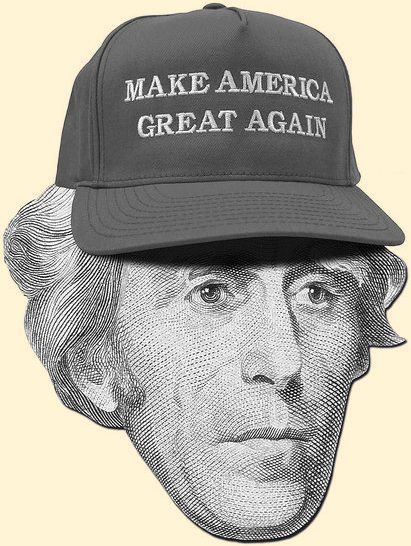 The Baron’s previous post about the phenomenon known as — Hallelujah! — President Trump was right on target. And his use of Trump in a digitally altered American twenty-dollar bill is probably something “Old Hickory” would have approved, as he would definitely approve of this replacement, almost two hundred years and thirty-eight successors later.

The Baron’s wonderful photoshop was far more resonant than he realized, though I’ll admit I’ve been saying from the beginning, with each new Trump tale, “See? It’s Jackson all over again!” The parallels are many and some are almost uncanny. But accompanying the similarities is the deep irony of Jackson’s ability to take his enemies’ barbs and transform them for his own use. Thus, when journalists of the day called the General (his preferred title, rather than “Mr. President”) a “jackass”, he took their ugly portrayal of him and transformed it into the Democrat donkey of a new political party (just in case you’ve ever wondered “why the donkey?”, that’s why).

Despite the B’s claim to my expertise on our seventh president, I only know what I’ve come across over the years when pursuing other subjects. If you want another parallel between Jackson and Trump, there is the sad but inevitable tale of Jackson’s removal of Native American tribes from prime eastern land to the arid West. The well-documented Trail of Tears, in which a quarter of the Indians died, was a draconian solution to the long, unremitting conflicts between Europeans and the indigenous peoples of the continent. Those “conflicts” were bloody and brutal on both sides.

The tribal peoples were never going to be “assimilated” on a large enough scale to assure peaceful coexistence. Though many individual native Americans could and did disappear into American pioneer life, most didn’t. The deep differences between tribal customs and European laws about property rights were enough to estrange the two groups. As it stood in Jackson’s time (i.e., the beginning of modern life) the tribal vs. village conflict continued to pose a high risk to European settlements. What we would call terrorism today existed all along the bloody Indian/Settlers’ borders. That Jackson chose to cut the Gordian knot by direct action was a characterological trait in evidence very early in life: as a boy his face was sliced by a British officer when Jackson refused to polish the man’s boots. Even at the age of six or seven, Jackson had strong beliefs he didn’t hesitate to voice, no matter the cost.

Jackson was hated by the elites of his time (including and maybe especially the illustrious Adams family) but their concerted efforts to defeat him failed repeatedly. He was impetuous, replacing members of his cabinet if they defied his orders. He was autocratic but loved and was loved by the common men who voted him into office. Twice.

Jackson got rid of the Bank of America and diminished the elites who ran it for their own profit. He was the only president whose administration left the country free of all debt.

Thus, when Sean Hannity interviewed Donald Trump this week and mentioned Andrew Jackson, Trump responded by pointing to Jackson’s portrait, which now hangs in the Oval Office. Trump is a businessman and a leader, but obviously he listens; people told him of his (political) resemblance to Jackson, and he took it to heart. I hope he finds the time to read The Birth of the Modern: World Society, 1815-1830.

The British historian Paul Johnson opens his thousand-page tour de force with a compelling portrait of Jackson, the epitome of a modern leader. Citizens of the Anglosphere, now threatened by widespread ignorance and deliberate divisions, would do well to see how a similar time traversed a period of great change and movement.

But I really came here to talk about a speech given by Bill Whittle, the indefatigable Tea Party libertarian who has worked tirelessly to find ways to turn the tide of a hundred years of Progressive waves. They wash ceaselessly over our culture, undermining efforts to create an informed citizenry.

This speech appears to have been given on November 10th, two days following Trump’s victory. I knew he had spoken at the Restoration Weekend, a David Horowitz endeavor, but combing You Tube for Mr. Whittle’s part seemed futile. Sometimes these big, pricey conventions embargo their speakers until well past the date of the event. Thus, the publication date on You Tube by this particular channel was well after the speech itself. But no matter; it’s still as fresh as the day he spoke and his words are well worth your time — if for no other reason than to figure out for yourself how you might be part of the change he envisions. As long as you have life and breath…

A note on visuals: it’s annoying to have so many people walking in front of the camera during this speech. If you find the bobble heads distracting, you might try my final resort, i.e., listening to his talk instead of watching it. There aren’t any power point presentations or illustrations you need to see so not viewing it won’t get in the way of understanding what he has to say.

A note on content: After he finishes his rousing introduction (this was November 10th, after all), the meat of Mr. Whittle’s speech — and it is definitely red meat for those of us who have waited so long for substance — consists of five points where we can make a difference. Five points that are either changing now or must change if we are to create lasting change.

The video is below the jump. The introduction is inspirational and highly recommended. Mr. Whittle’s speechifying has improved remarkably over the years and this video is proof that practice does make perfect. He speaks with verve, humor, and heart. Great heart.

About nine minutes in he begins to talk about The Plan to Take Back the Culture. He admits he’s borrowing their strategies (Rules for Radicals is a perennially popular book because Alinsky goes to the heart of the matter. Some of it has to be updated, but the basics remain.) However, you can avoid giving to the Alinsky Foundation by reading the right wing version: Rules for Radicals Defeated: A Practical Guide for Defeating Obama / Alinsky Tactics This book is supported on a number of devices — computers to iPhones, take your pick.

Mr. Whittle’s point is that you can’t win this thing if you don’t know the game. And our opponents have been playing it for anywhere from a century or so ago (see Fred Siegel) to the generation immediately following World War II (see Diana West). It doesn’t matter much at this point how long this ‘game’ has been in play. What does matter is that the minds of our fellow citizens and those of our children are often the weapons our enemies are using to bring down Western culture.

So how do we fight back? Co-opt the rules. We have a very short window in which to succeed, so we’d better get things going before the radicals regain power. It’s a tall order, but it can be done if we have the will and the heart to engage. Learn how to persuade rather than argue, and you can ‘flip’ a soi-disant liberal in about fifteen minutes. Scott Adams claims that Donald Trump won because he was simply a better persuader than Hillary Clinton. I believe him.

You may glean different take-away lessons from this speech than I did, but the more ideas the merrier, as long as each person’s five points are internally congruent.

Here’s my synopsis. It leaves out a lot, which means you need to listen to the speech (and tell me what I missed).

We start by re-claiming the kids. He does that on college campuses and describes the courage of young conservatives. That courage has to be backed up with adult wisdom and wherewithal. Kids need encouragement for visions of small businesses, of niche entrepreneurship. When the robots take over, they’ll be ready to move in other directions.

[He doesn’t mention the coming irrelevance of “college” beyond the elites who are closing the doors against the hoi polloi. Soon state “universities” will be little more than credentialing zones. But as ‘higher’ learning becomes more distributed among a variety of venues, the big “knowledge” factories will be safe spaces for the Left and the crazies. Their riots and whining will become faint echoes. Real learning will take place elsewhere.]

We don’t need to bring a gun or knife to the fight; we bring our knowledge of the linchpin of conservatism in action: economics. Our children (not to mention our horribly indebted adults) are illiterate when it comes to money. Clueless doesn’t begin to describe it. The hunger for economic literacy is attested by Walter Williams’ classes on Everyday Economics, for which there are waiting lists. He is a brilliant teacher whose humility and humor manage to make economics compelling. We need to find more like Dr. Williams, teachers who can explain why knowing matters.

We must return to the “fog of culture”. Conservatism used to rule entertainment; it doesn’t anymore — not since Easy Rider became cool and “entertainment” became nihilistic, dark, and meaningless. There are ways to do this, but the easiest road in the beginning is via the heroics of mythology. Kids (and adults) are drawn to myths and adventures where the good guys win. Our founding myths are disappearing under dystopian garbage. There is a reason Star Wars is so important; it captures the hunger for heroics and for meaning.

One revolutionary point in his plan is to change the political rules in order to install drastically shortened term limits. No more fiefdoms in the halls of Congress. We could do this, but it will take the engagement of enough regular folks to push it through. A man could serve at the local level, move to the state level, go on to the national level (which could include a term in both the House and Senate. After that, unless he’s running for president, he goes home). This is how we started, after all. George Washington refused a third term, Thomas Jefferson couldn’t wait to get home to Monticello, etc. We were intended to be ruled by our fellow citizens, those who reluctantly did their duty before getting back to real life.

Finally, Bill Whittle mentions the growing irrelevance of credentialed “journalists”. That house of cards is going to be blown away as technology continues to improve our instant communications. Even Facebook will become irrelevant as new forms of “in-gathering” replace the top-down strictures of Facebook. People are tired of being told what they may say, and they are growing restive under the politically correct “curated” news they’re permitted to see. As Whittle notes, there are 180 million folks with phones and those phones have cameras. The news will be told by whomever captures the image… bye, bye, top-down information.

Just as the journalists are being shoved to the sidelines, so are the platforms like Facebook and Twitter standing on shaky ground. Can you say “free-for-all”?

I hope everyone joins in this conversation. We only have four, or at the most eight, years to beat back a hundred years of evil and ignorance and “special” interests. We need one another if we are to succeed in this venture.

Thanks to Nash Montana for the image at the top of this post. We don’t know where she got it!

16 thoughts on “The New Politics: Whither Hence?”