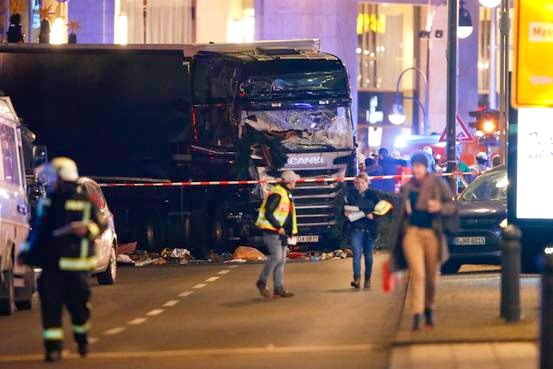 Today was a big news day. Besides the Electoral College vote (Trump won) and the shooting in Ankara (the Russian ambassador to Turkey was killed), there was a shooting outside an Islamic center in Zurich, leaving three wounded.

But the biggest story of the day in Europe was a truck attack at a Christmas festival in Berlin, which killed nine people. The German MSM have been mostly treading water on the story — presumably not wanting to discriminate against and stereotype certain groups — and are reluctant to suggest what the incident probably was, namely an incident of vehicular jihad like the one last summer in Nice.

The truck that ran over the festival-goers was owned by a Polish company, and had had a Polish driver up until a few hours before it was used in the attack. Because of the Polish connection, there is useful information about what happened (plus informed speculation about what is not yet known for certain) in the Polish media.

Many thanks to Ava Lon for translating this article from Gazeta.pl:

Polish truck drove into the crowd in Berlin. Police suspect a terrorist attack [WHAT DO WE KNOW?]

For guests of the Berlin Christmas Market, Monday evening ended tragically. A truck from Poland drove among people, leading to the death of nine of them.

On Monday, shortly after 8 pm a truck drove into the Christmas Fair in Berlin on the Breitscheidplatz . The car belonged to a Polish company. Police said there were nine deaths, and fifty wounded have already been taken to the hospital. In the truck was a dead person. “It is not known whether any of the victims are Poles,” provides a spokesman for the Foreign Ministry. Services suspect that it was a terrorist attack, but have not yet confirmed this information.

2. Who was the perpetrator?

The perpetrator fled the scene but was caught and interrogated by the police. His identity is not yet known. The Scania carrier that was used for the attack had Polish number plates and was returning from Italy. The owner of the truck and the driver’s wife of had no contact with the driver for a couple of hours. It is not known whether he was driving the vehicle at the time of the attack. The media have already suggested their first theories about the perpetrator. Die Welt reported that he was a Pakistani.

3. What about the Pole, who was responsible for the truck, according to his boss?

The truck belonged to a Polish transport company owned by Ariel Żuławski. The man commented on the matter to TVN24. “This individual, who jumped from the vehicle, was not my driver. I guarantee it. It was not my driver, he must have hurt my driver,” he argued. “I’ll vouch for him. This is my cousin; I have known him since childhood,” he stressed.

4. Whose body was in the truck?

In the Polish truck a body was discovered in the passenger’s seat. Reuters announced at one point that he was a Pole, but the Polish Foreign Ministry did not confirm this information, and the agency quickly withdrew it. At the moment neither the identity or nationality of the deceased is known.

Money.pl reached one of the employees of the transport company that owned the truck. Based on the GPS data, the man estimated that between 3pm and 7pm someone tried to start the engine several times. According to him, the truck started at 7:34 pm — even though it wasn’t supposed to leave Berlin today. “It looks as if someone was trying to learn how to drive this vehicle. He also had problems turning the engine on,” he said. Perhaps this means that the truck was stolen.

6. When are we going to find out more?

Berlin authorities announced that at noon on Tuesday a special press conference will be held, during which they will provide all the information acquired. Questions will be answered by, among others, Police Chief Klaus Kandt. Until then, neither the police nor the fire brigade will answer questions on the subject.

7. What was the situation in Berlin after the attack?

According to police, there is no danger at the site of the attack. Nevertheless, police appealed to the citizens of Berlin to stay in their homes. The mayor pointed out, however, in an interview with reporters that the situation in the city is under control. At about 11 pm 130 firefighters were involved in the rescue operations. The streets around the fair were blocked by police.

34 thoughts on “Truck Jihad in Berlin”