As reported here a couple of days ago, the man responsible for the murder of Maria L. in Freiburg has been apprehended. He turned out to be a 17-year-old Afghan (but are any of these Afghans in Europe really 17 years old?).

Maria and her parents were both active in the “welcome refugees” movement. The following essay examines her murder in the context of the “welcoming culture”.

Many thanks to K. from Germany for translating this article from Politically Incorrect:

The Dead Girl and the Sick Country

There are crimes which not only tell us something about the criminal and the victim, but also about the state of society and the country in which they happen. The humiliation, rape and murder of the 19-year-old medical student Maria in Freiburg is such a crime without doubt. The equally suspicious as disgusting appeasements and relativizations of those responsible for the “welcome culture” and their media prostitutes are not going to change this at all. Quite the opposite: this choir of the warners of blanket judgements and popular enragement only confirms that those in charge of letting the alleged murderer cross the state border in 2015 know full well about their complicity in this horrible deed, which was not the first one of a “Merkel refugee” and, unfortunately, won’t be the last.

The dead girl came from a family of the Federal Republic’s societal elite, which takes pains to be cosmopolitan, tolerant, and friendly towards strangers at almost any, yes even at any cost. This is the spirit in which Maria certainly was brought up in, and which inspired this elite daughter to engage in volunteer work for “Merkel refugees”, doubtless in a sincere and idealistic manner. There is no reason — moreover, it is outright disgusting — to heap scorn and sarcasm on the murder victim for this posthumously. Because Maria only did what the doubly and triply protected chancellor has advised the German people to do, namely to seek direct contact with the foreign-cultured “refugees”. And one can well suppose that the dead girl’s parents also had nothing at all against her activities there.

Maria’s father is a high EU functionary and active Christian in the official Catholic Church. He is, as evidenced by a documented text, an active supporter of this “welcoming culture”, which has now cost his daughter her blossoming young life. This, too, for sake of piety and compassion, is no grounds for scorn and ridicule. However, it makes for a compelling reason to ask the question: why did Maria’s parents choose not to express any sign of anger or despair at all about this heinously brutal, violent death of their child in the obituary for her? Maria did not fall victim to a fateful illness or a tragic accident, but to a sex-hungry murderer, who, after the satisfaction of his lust, “disposed” of her in a river.

This deed must not, even by the commandment of Christian charity, be denied the rage of the bereaved, the call for punishment. At the time the obituary was published, the parents and sisters of Maria could not know yet who would be apprehended as alleged perpetrator. But they could not exclude at all the possibility that the delinquent was a “Merkel refugee”. It takes some outright irrational defiance as well as ideologically motivated ignorance to call for donations to a local “refugee” charity right in the obituary while still under uncertainty what the search for the murderer would turn up. 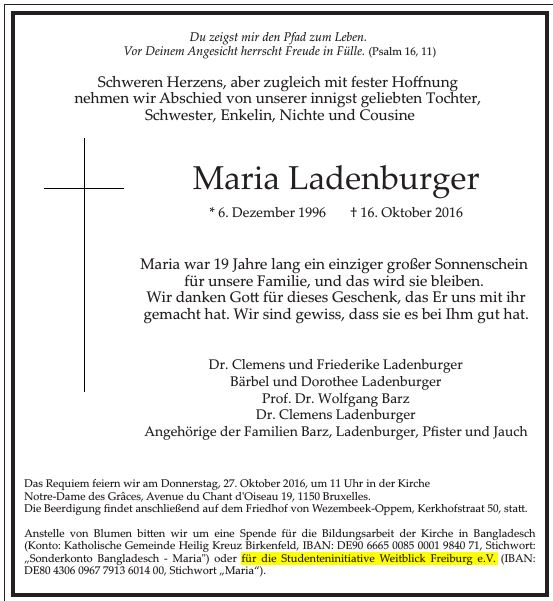 The family now has to live with the gruelling truth about the death of their daughter, namely that they have sacrificed their own child to the moral-imperialistic hubris of the operators and supporters of this “welcoming culture”. How do the parents intend to live with this immense burden? But it’s not only about these parents from Germany’s societal elite. It is much more about the fact that those who are scandalized about this and other crimes, angry and deeply unsettled citizens of this country, now are to be downright forbidden from expressing their indignation, frustration, and insecurity.

Whatever it is that prevents Maria’s parents from showing an entirely natural reaction — one that is even indispensable for individual and societal survival — we, the indignant, angry, and unsettled must not accept at any cost that we will receive the reaction prescribed by those, of all people, who proved themselves equally incompetent and unwilling to protect the borders of our country as well as [its society] from the not-at-all surprising consequences of the Merkel invasion.

A country whose political and media class would prefer to treat the barbaric rape and murder of a young girl as a regional detail*, is a deeply sick country, partly striving for its own annihilation. Those who intend to refuse this sickness and urge for self-destruction have a right, and must not shy away from breaking entirely with those, who seek to deny their co-responsibility for the dead Maria. The year 2016 began with the shock of the massive sexual aggression of alien-cultured “refugee” men in Cologne and elsewhere. It ends now with a student in Freiburg raped and murdered allegedly by a young “refugee”. The message for 2017 is clear for the part of Germany still willing to live: Whoever still wants to continue to tolerate the political and media class responsible for all of this no longer has a future in mind for this country.

95 thoughts on “The Dead Girl and the Sick Country”