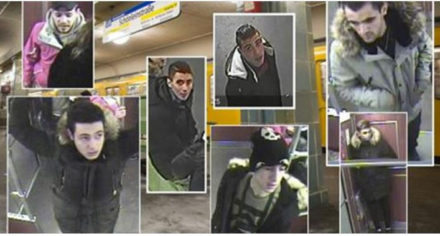 Young culture-enrichers in Germany seem to have a tendency to become firebugs lately. The following article from Politically Incorrect draws on German media sources for the latest news about the deliberate burning of German natives by the “New Germans”. It also points out the possible religious justification for this new feature of diversity in Modern Multicultural Germany.

On Holy Night (Christmas Eve), seven migrants set fire to a sleeping 37-year-old homeless man next to the Schönleinstraße subway station in the Berlin district of Kreuzberg. Several people who were passing by and one subway rider immediately sprang into action and may have prevented more serious injury. The actions of the “youths” have now been classified as attempted murder, as one spokesperson for the police informed the public.

The Berliner Zeitung writes neutrally of “young men” even though that when looking at the pictures it is clear to everyone that they are migrants:

During the night between the 24th and 25th of December seven young men set a homeless man on fire at the subway station Schönleinstraße. Now pictures of the offenders have been published.

That was fast! Immediately a day after the horrible deed in Berlin-Kreuzberg, the Berlin police had published the photos of the perpetrators. The pictures show altogether seven young men.

One should pay attention to the downplaying public-service-speech of the police:

“The seven youths, all of them young men, are under the suspicion of endangering a sleeping homeless man with fire at the subway station Schönleinstraße”, the police informed the public on Monday.

“Endangering with fire” — that sounds as if the migrants were lighting up cigarettes near the homeless man. The reality is they had set him on fire and wanted to burn him! But at least the usually much sleepier Berlin police published the photos immediately. According to the Berlin Zeitung, the seven migrants fled on the subway after the incident. They have not been apprehended yet.

Here is a video from CCTV in the subway:

Another similar case, although with children, happened on the afternoon of December 23rd, in Hamm: On a playground three youths that looked “Eastern European” sprayed two children, ages 9 and 10, with a spray can and lit them on fire with a lighter. The Westfälische Anzeiger reports:

The children suffered mild burns and were brought to the hospital. The fleeing perpetrators were youths who looked Eastern European. All three were wearing hoodies.

In Cologne a 45-year-old Turkish man doused policemen with gasoline and wanted to set them on fire. But it was prevented at the last moment through the actions of one policewoman, who kicked the lighter out of the Turkish man’s hand.

It may be assumed that all of the offenders are Muslims. In Islam, people of another religion are contemptible unbelievers, “worse than the animals, worth less than animals”, who have to taste the punishment of burning to death.

We know this practice well enough from the Islamic State, who either slaughter people like animals or burn them alive. If you have the nerve, watch the videos online. Mohammedans can find in abundance appropriate verses in the Koran from their “god”, allah:

A Merry Christmas to all those who can (for now still) celebrate unburdened during the Islamic “enrichment”.