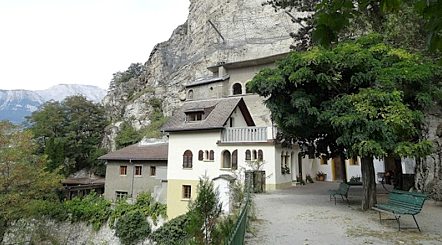 More information is trickling in on the stabbing of people on their way to church on Christmas Day in the Valais canton of Switzerland. (See the previous reports from yesterday and earlier today.)

The original assertion that the perpetrator was a Muslim cannot be confirmed, but it has not yet been definitively ruled out. The latest reports say that the dead man may not in fact be the one who carried out the stabbings, and thus the perpetrator may still be at large.

I still don’t know where the original source (Dreuz.info) obtained the information that the attacker or attackers were alleged to be Muslim.

Many thanks to Ava Lon for translating this article from the French-language Catholic news portal Cath.ch:

Valais: One death and three assaults on the route to the hermitage at Longeborgne

On December 25, 2016, several people were stabbed on the way to the hermitage of Longeborgne in Valais. One person was found dead. This death is probably related to the attacks.

A heavy police deployment was set up in Bramois on the morning of December 25, in the Borgne gorges, reports the Valais daily Le Nouvelliste. Three people were injured. A dead body was found in the bed of the Borgne in the afternoon. The attacks took place as the faithful went to Christmas Mass.

According to the initial investigation, there were allegedly no religious motives. Instead, the assaults are said to have taken place in a family context. It is in any case established that the deceased and one of the injured are related.

Assaults on the way to Mass

Father Francis of the hermitage confirms at cath.ch that the afternoon Christmas Mass was cancelled and the road blocked because one person was stopping the faithful on the route and assaulting them. He indicates that the Midnight Mass did, however, take place. He said he could not say more, as the investigation was still ongoing.

Shortly after 9 o’clock, a lady of about seventy years, wounded by a knife, came to the emergency room of the Sion hospital. Based on the latter’s indications, the police immediately went to Bramois, on the road to the Hermitage of Longeborgne. In this area two people were found injured, also with a knife. They are two men, one seventy and the other about thirty. The latter, seriously affected, was brought by helicopter to the Sion hospital.

No indication of a religious motive

A significant number of personnel were deployed by the police to close and search the area. Investigations in the secured area made it possible to discover the body of the deceased man at 3:30 pm in the bed of the Borgne. It cannot be excluded that the deceased is related to the events of the morning. The police spokesman, Markus Rieder, told the press that the exact role of the dead man had yet to be elucidated, but that he could also be a victim, since he was related to the seriously injured man. In that case the perpetrator might still be at large.

During the afternoon of December 26, the Swiss French-language daily Le Matin reported that “the person at the origin of the aggression has most likely put an end to himself.”. That would be the person found dead in the Borgne. His identity is still unknown. Xavier Roduit, director of Foyer des Rives du Rhône [a rehab facility], denied the rumors that the dead man was a resident of the facility.

At this stage of the investigation, there is no evidence or indication to show that the attack was carried out on religious grounds, the police said. According to Markus Rieder, the weapon used was probably a knife.

9 thoughts on “Is the Longeborgne Perp Still at Large?”