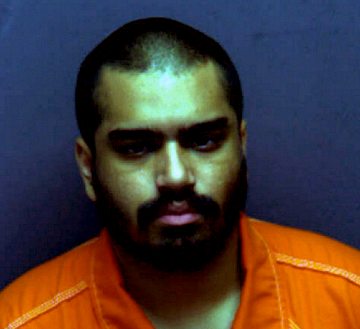 There was an aborted jihad attack not far from us here in Virginia over the weekend, but I didn’t encounter any news of it until just now.

When I saw the headline this morning about a “possible ISIS-inspired terror attack in Virginia”, I assumed that the incident must have occurred in Northern Virginia, a.k.a. The Wretched Hive of Scum and Villainy. The southern suburbs of Washington D.C. are now a vast cesspit of cultural enrichment, much of it Islamic. Fairfax County — abode Anwar of al-Awlaki and numerous other jihad celebrities — is a particular hotbed of Koranic ferment.

But last Saturday’s attack was in Roanoke, a fair-sized regional city located at the upper end of the Valley of Virginia at a large gap in the Blue Ridge Mountains. More specifically, the incident occurred in Roanoke County, near Cave Spring in the suburbs west of the city. A 20-year-old culture-enricher named Wasil Farooqui attacked a man and a woman with a large knife while yelling “Allahu Akhbar”. The perp reportedly tried to behead the man, but the victim managed to fight off the mujahid, despite his own severe wounds.

When I saw the mug shot of Wasil Farooqui, he didn’t look that young, so I wondered if he had perhaps been an “unaccompanied minor” who knocked a few years off his age in order to be implanted in Roanoke by the Refugee Resettlement Program. But no; according to The Daily Mail, Mr. Farooqui was born in the USA. He’s as American as apple pie and female genital mutilation.

Two things about these news reports were surprising:

It will get even more interesting when the Mail and other outfits that do actual reporting dig into the guy’s mosque and other details of his background.

Below are excerpts from various news reports. First, from the local TV station WDBJ7:

The FBI is now involved in a stabbing investigation in Roanoke County.

Wasil Farooqui is charged in the incident that seriously hurt a man and woman at The Pines Apartments on Saturday.

Witnesses told police that during the attack Farooqui was yelling “Allah Akbar.”

He remains in jail tonight without bond.

A man and woman told police they were attacked at The Pines Apartments just before 8 p.m. as they entered the apartment building. Both were seriously hurt and taken to the hospital.

Police have charged Wasil Farooqui, 20, of Roanoke County in connection to the stabbing. He has been charged with two counts of aggravated malicious wounding. He is being held without bond at the Western Virginia Regional Jail.

Investigators believe that this was a random attack, and Farooqui had no connection to the two victims.

“The FBI is working with the Roanoke County Police Department following the incident that occurred on Saturday evening,” said Adam Lee, Special Agent in Charge of the FBI’s Richmond Division.

“While I cannot discuss details of the investigation at this time, I do want to reassure the community that we are working to determine the nature of the incident,” Lee said.

According to ABC News, Farooqui had traveled to Turkey in the last year and may have tried to sneak into Syria to meet with ISIS militants.

Farooqui allegedly attack a man and woman at an apartment complex in Roanoke, according to WDBJ-7. Both victims were seriously injured in the attack. Witnesses told authorities that Farooqi was yelling “Allah Akbar.”

Authorities believe that Farooqui may have been trying to behead the male victim, according to ABC News. Investigators said that there was no connection between Farooqui and the victims.

A man in Roanoke allegedly shouted ‘Allah Akbar’ while attacking a man and woman with a knife Saturday, an incident being investigated by the FBI.

The man fought off the attacker, police said, who fled the scene but was apprehended when he came into the same emergency room where the two victims were being treated. Police were in the hospital and soon arrested the suspect, identified as 20-year-old Wasil Farooqui of Roanoke County. He is charged with two counts of aggravated malicious wounding and is being held without bond at the Western Virginia Regional Jail.

Roanoke police said the attack was believed to be random and that Farooqui had no connection to the victims.

Adam Lee, Special Agent In Charge of the FBI’s Richmond Field Office, said in a statement provided by local police that the agency is involved.

“While I cannot discuss details of the investigation at this time, I do want to reassure the community that we are working to determine the nature of the incident,” he said.

And from The Daily Mail, which seems not to have been working from the same wire service accounts as the other reports, but used different sources:

Wasil Rafat Farooqui, pictured, was arrested on Saturday evening after a man and a women were attacked in Roanoke, Virginia

The FBI has launched a terrorism investigation after an alleged extremist attempted to behead a man and stabbed a woman outside in Virginia in a possible ISIS-inspired attack.

The incident happened outside an apartment complex on Saturday night in what police in Roanoke are describing as a ‘random attack’.

Witnesses said the suspect, identified as 20-year-old Wasil Rafat Farooqui, shouted ‘Allah Akbar’, meaning ‘God is the greatest’, while attempting to decapitate the male victim, who was able to fight off the armed assailant.

The suspect had previously tried to sneak into Syria for terrorist training.

Police arrested Farooqui, a US-born citizen, when he walked into the same hospital as the two victims to seek medical treatment for his own injuries.

The suspect has been charged with two counts of malicious wounding causing permanent impairment according to jail records. He is being held without bond at the Western Virginia Regional Jail.

According to jail records, the man and woman suffered ‘permanent impairment’.

According to ABC News, Farooqui had previously traveled to Turkey with the aim of sneaking over the border into Syria and joining ISIS.

A US intelligence source tells CBS News that Farooqui, who is believed to be self-radicalized, only got as far as Europe in his travels and returned home earlier this year.

It was that aborted trip to Syria that made the FBI take notice of Farooqui in the first place, according to the source.

Saturday’s attack happened around 8pm at The Pines apartments in the 4300 block of Banbury Lane.

13 thoughts on “Jihad in the Old Dominion (Again)”