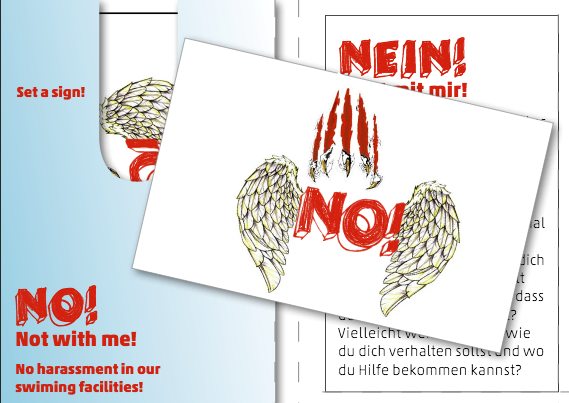 It’s summertime, and summer in Germany means being molested at a swimming pool — especially if you are a pre-pubescent girl.

It was not always like that. Prior to last year’s wave of “refugees”, such incidents were rare. But now they are commonplace in German swimming pools.

The following article describes a solution proposed by the authorities responsible for overseeing swimming pools: a suggestion for young girls that they wear stick-on tattoos that say “NO” when they swim, so the would-be molesters will leave them alone.

This idea is so staggeringly, stupendously stupid and/or insane that it reduced me to bug-eyed arm-waving incoherence when I tried to explain it to Dymphna.

How could anybody think this was any sort of “solution”?

How do such people get placed in important positions of authority?

Why hasn’t Germany long since melted down into a heap of moronic slag, if this is the quality of the personnel charged with running the country?

Many thanks to Nash Montana for translating this piece from Roland Tichy’s website:

Completely falsely understood tolerance continuously sprouts new blossoms. All the while the commissioner for women and family in the Bodensee district has no clue just how much her efforts for the good advance the bad. Women should stick on defensive tattoos? And whoever won’t do that can be considered as fair game? Apparently it can’t get any dumber than this. Only problem is, it’s dangerous.

If in the past few months there was one single topic that was discussed over and over, then it was about the fact that we are selling our values. That we are conceding tolerance and religious freedom to people who in return do not in the slightest concede these same values back to others. Such as the freedom of opinion by those leftist informers of the Amadeu Antonio Foundation, which — financed by the federal government — decides what is right and wrong, true and false “hate speech” on the Internet. And of course, the reaction over the equality of men and women which in the aftermath of the reactions to the Cologne sex attacks was the first thing as part of the refugee crisis that burned up in a big fiery blaze in the name of the welcoming culture.

Just what kinds of effrontery were women made to endure in this country that only victimized them for a second time? Why is nobody decisively against how the government only stands idly by and watches, only to then ridicule and mock the victims a second time with clever tips? Is our understanding of the equality for women, their right to bodily physical integrity, really this weak? What does this say about a supposed modern Western country, when in the face of an evident new threat towards women it is the women who are being held responsible?

And what about those that don’t wear stickers?

After Silvester Night it was advised to keep “an arm’s length of distance”. At the Bavarian Broadcast station one refugee helper just recently suggested that young women and girls will have to be educated about how they should act towards asylum seekers, so that they don’t “provoke” them, and now? Stick-on tattoos which say “No”?

Wait a minute, you think this is too out of touch? Veronika Wäscher-Göggerle doesn’t think so. The commissioner for women and family affairs at the Bodensee district sees this campaign that she brought to life as an help for young swimmers. She assures: “I do believe that they are very insecure.” Also a cartoon which will be available at public pools will explain what is acceptable and allowed and what is not. Wäscher-Göggerle sees the stick-on tattoos as an incentive for young pool guests to talk about the issue. Because it shouldn’t come across as a new pool regulation.

“Well, why not?” you might ask yourself. Why shouldn’t it be a new regulation that women aren’t to be harassed or groped? And who really is insecure here? Young people in general? Or mostly the asylum-seekers that came here this year and last year? So as when the ‘arm’s length’ alone isn’t enough, then maybe the fingerprint to the stick on tattoo? Just what kinds of people come up with these ideas?

They are the same people who for months now have immediately held up the “youyouyou” index finger whenever another asylum seeker, again, behaved poorly. People who cannot assert themselves, who are downright afraid of even putting their foot down just once, all because one doesn’t want to be a Nazi. Those who still have not understood from which countries many of these asylum seekers actually came from, and that one can and will not stop these people from patriarchal, authoritarian countries, from what they’re doing with stick on tattoos, brochures, and arm’s lengths. Apart from the fact that this shouldn’t be the duty of women and young girls, anyway, to try and prevent these incidents by making them behave differently than they normally would.

What we see is that the latter is more and more becoming a prominent issue. That many women in the meantime by now are going to public pools with uneasy, queasy feelings. Parents don’t even send their young girls there alone anymore, because they’re afraid. Restrictions for women and girls? Impairment of their daily life? It all has long since begun. Numerous emails sent to me in the past few months speak volumes.

Has always been like this? Where were these tattoos back then?

Meanwhile at Bodensee people rather point out that there are indeed cases of sexual harassment, but that it’s no different than it was before. And that’s why Veronika Wäscher-Göggerle emphasizes again, that her campaign has absolutely nothing to do with the issue of refugees. “That is completely independent”, she explains. “Sexual harassment in pools has always happened.” Yes. Then why this campaign now???

Yeah, yeah, those many sexual assaults in the olden days at the pool. I can clearly remember. Just like the multitude of campaigns, brochures, and stick-on tattoo initiatives. Even back then they were lying around at every public pool desk because Dennis and Alexander didn’t know how to behave themselves.

One just really wants to ear shatteringly scream from these effronteries. But instead, a cloak of silence is lying over everything, and especially over us women; we take it, that which we don’t want to take any longer. Because this is not just about a growing danger for our security and physical integrity. This is also plainly about that we are being ridiculed and the butts of jokes. With each stick-on tattoo, each clever arm’s-length tip and each prompting to change our behavior, all in the name of not being provocative. We are indirectly made the guilty party and we shouldn’t let this happen to us one minute longer if we give one hoot about equal rights and treatment.

It should be brought to our mind that this beautiful new world was courtesy of us. It is screwed up that stick-on tattoos and brochures have to lie around everywhere, that security people are constantly circling us, and that restraint and self-limitation set in before we even realized it. My youth was wonderful. Never once did I have to have second thoughts about whether something could happen to me at the pool. It’s this kind of youth that I wish for today’s girls and boys, because they are impacted by this as well.

It’s so often like this: Exactly because we don’t want to discriminate, by claiming these campaigns and initiatives are meant for everybody, one discriminates — and the victims of this discrimination are the German boys and girls, who up until now had a completely natural way of dealing each other, but who now are losing this implicitness with each other because of such campaigns.

Result of such tolerance: hyper-sexualization

Here, as well, the big issue is the focusing on sexuality in Islam, which now by ways of mostly male Muslim refugees has been brought to us to an even larger extent. Nothing shows the culture clash so clearly as the different ways in which sexuality is handled, and which does not become an issue until these cultures clash. And now that this happens in ever greater numbers — and we can see that very obviously — we are the ones who are adjusting ourselves.

Because, in order to combat the hyper-sexualization of Muslims in our daily lives, we come up with strategies (no matter how absurd) to figure out how to avoid these daily incidents, we over-sexualize our everyday life. Where boys and girls before were largely socializing with each other openly and unashamed, and most of them never having had any thoughts about that one could be sexually harassed, we now convulse their social lives with our campaigns and initiatives. We accuse each boy of being a potential groper, and we tell each girl that she has to always be careful of every boy and man. The consequence is exactly that which one actually sought to prevent: the general focusing on the sexual which in turn determines all of our social life.

36 thoughts on “Tattoo You”