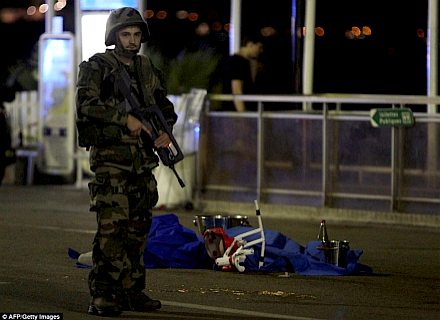 So it happens again. Yet another Muslim commits mass murder on European soil. This time, it was in Nice on the French Riviera. A terrorist from Tunisia killed at least 84 people by plowing a truck into a crowd of thousands gathered along a seaside promenade in Nice to watch the city’s Bastille Day fireworks.[1] Some of those who were murdered were children. Next time, it may be in London, Berlin, Rome, Amsterdam, Vienna or Stockholm. Or perhaps in a French city yet again.

Several observers, among them myself,[2] have for many years predicted that France is in serious danger of facing a civil war due to mass immigration, ethnic tensions and Islam. The French intelligence chief Patrick Calvar warned against the possibility of a “civil war” even before the Nice attack.[3] Jihadist attacks have escalated in frequency and severity.

It is immensely tiresome to listen to the many nonsensical comments after each Islamic atrocity. As commentator Simon Jenkins wrote in the left-wing newspaper The Guardian: “What has happened in France is tragic and calls for human sympathy. Beyond that, there is nothing we can usefully do — other than make matters worse.”[4]

The fatalism here is striking. Muslims of immigrant background commit mass murder against Europeans over and over again. Yet we are not supposed to do anything substantial with our immigration policies. Just continue as before. Islamic terrorism is treated as the weather: Something that is beyond human control that you should merely adjust to.

A few hours after dozens of his countrymen had been brutally murdered by a militant Muslim in Nice, the French Prime Minister Manuel Valls stated that France will “have to live with terrorism.”[5] That is a ridiculous statement.

A country’s leaders cannot publicly say everything that they think privately. Maybe a President or Prime Minister cannot state openly that we are at war with Islam, even though this is perfectly true. However, they can say something that is meaningful. If they cannot do so, it is better that they shut up.

We don’t need any more crying or meaningless gestures. We need action. For security reasons, the authorities in all Western countries should suspend indefinitely every form of immigration from the Middle East. Western political leaders must do this, or resign.

41 thoughts on “Western Leaders Should Halt Muslim Immigration or Resign”