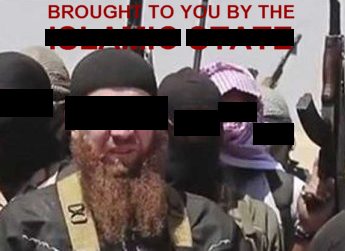 Several French media outlets announced today that they will no longer broadcast the names or photos of terrorists. The rationale behind the decision is that to do so “glorifies” the despicable acts of the mujahideen, helps spread their violent propaganda, and encourages further radicalization.

As it happens, it also prevents the French public from learning that (a) the terrorists have a “Middle-Eastern appearance”, and (b) Muslim names, not infrequently including variants of the name “Mohammed”.

But I’m sure these last two are just side-effects of the editors’ high-minded decision. No one would want to deprive the public of such important knowledge, would they?

Here’s a discussion of the issue from BFMTV. Many thanks to Ava Lon for the translation:

While the [terrorist] attacks are increasing in France, the debate on a possible “glorification” of terrorism has been revived in the French media. BFMTV and Le Monde have decided not to broadcast pictures of the authors of the attacks. Elements of reflection.

Can the media image of the attackers influence candidates for jihad, and push them to take action? After the attacks of Nice and Saint-Etienne-du-Rouvray, the debate was revived in the French media, including by Jérôme Fenoglio, editorial director of Le Monde, which published an editorial this morning to this effect.

“Following the Nice attack, we will not publish any more photographs of authors of the killings, to avoid the possible effects of posthumous glorification,” says the reporter, who calls for a “lot of introspection” in the French media.

A position shared and adopted by BFMTV on all media. Following the attack in Saint-Etienne-du-Rouvray, the channel has decided not to publish the photograph of Adel Kermiche, the suspect of the murder of the father Hamel. [Is he still a suspect if he was killed at the scene? — translator]

“Faced with the accumulation of attacks in France, we do not want to create a rogues’ gallery of terrorists. So we stop publishing their photos, which does not prevent a work of investigation on their profile and their background. The only exception to this principle is the wanted posters, the search notices from law enforcement, that can help investigators,” commented Alexis Delahousse, deputy managing editor of BFMTV.

Shortly after the attack on 14 July in Nice, a petition was even officially launched to ask the CSA [Superior Council of Audiovisual (Content), a French institution whose role is to regulate the various electronic media in France, such as radio and television. Its predecessor, the Haute Autorité de la Communication Audiovisuelle, was created by the Socialist Party] to control the dissemination of such images. If this petition already has 70,000 signatories, the debate is however not new.

Photos that cause a scandal

Back in 2012, many readers and viewers were moved by the publication of photographs of Mohamed Merah, the perpetrator of the killings of Toulouse and Montauban, where we saw the terrorist laughing at the wheel of his car.

Similar reactions were observed in the aftermath of the attack on 14 July in Nice, during which 84 people were killed by a truck careening at full speed along la Promenade des Anglais. The press then diffused a more “advantageous” photo of Mohamed Lahouaiej Bouhlel, the author of the killing. We see him lying on the beach and showing off his muscles in a triumphant pose.

A vision all the more shocking, since at the same time several videos showing the victims of the attack — injured or dead — circulating on social networks. However, the decision not to broadcast the photographs of bombers poses several deeper questions. Several jihad specialists question and doubt the effectiveness of such a measure in the fight against radicalization. And David Thomson, RFI journalist and the author of a book on the lives of several French jihadists (The French jihadists, ed. les Arènes), doesn’t expect a decrease in terrorism.

A view reinforced by the fact that for several years ISIS has disseminated its propaganda with its own media channels. On social networks or via its QAMA agency, the terrorist organization propagates, after every attack or almost all, pictures of those responsible, rendering obsolete any attempt of the traditional media to “obscure” them.

Besides the problem of any possible “glorification” of terrorism, there’s the problem of the conspiracy theory. After every attack, every major event, the conspiracy-mongers from all sides attack the official version and try, usually by misinterpreting images, to discredit the facts. How to fight against these theories and their authors, while casting a veil over the pictures of the terrorists?

Should their names be removed?

On 27 July, following statements of Le Monde and BFMTV, it was the turn of Europe 1 to decide not to broadcast pictures of terrorists, and adding banishment of their names, a first in the media.

@ Europe1 decides not to mention on the air the names of the authors of the killings. Their photos will no longer appear on europe1.fr

Problem: the media and the judiciary are not on the same wavelength. While during the day on Tuesday the media were broadcasting the initials of one of the alleged perpetrators of the attack of Saint-Etienne-du-Rouvray, Prosecutor François Molins gave the full name of the man killed on the steps of the church.

Once the investigation is officially launched, and these elements published by the justice, what impact the non-dissemination by the media of these can have on the public, at a time when social networks often transmit information faster than traditional channels? This is the position taken by BFMTV, and assistant editor Alexis Delahousse explains that “if François Molins gives the name, then we will too.”

Again, the conspiracy theory is not far away. On Twitter the extreme right regularly calls authors of articles about the various facts or acts of terrorism, and in which full names are not given. Each time, the press is suspected and accused of deliberately withholding these names in order to cover up the extent of the particular case.

18 thoughts on “The French MSM Anonymizes the Jihad”