Rembrandt Clancy has translated an article from Neue Züricher Zeitung about the current state of political discourse in Germany — which, not surprisingly, is grim. 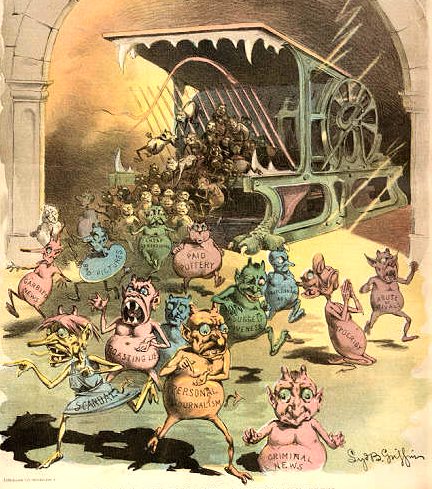 Communicative rowdiness has also found its place in the traditional media. The angry citizen confronts the angry journalist on the Internet.

The state of public communication in Germany is lamentable. Descriptions of agitation and hatred from the right-wing make up the leading vocabulary with which politicians and the established media fuel this lament. The Internet with its social networks is considered the root of all evil. Here limits are breached and there is a continual mockery of communicative decency; laws should facilitate more control and even make restrictions on freedom of speech possible.

The intensity of the public debate, with its escalation on the Internet and its culmination in everything evil attributed to right-wing populism, can lead one to overlook the fact that communicative rowdiness has long since found its place in the traditional media. The counterpart to the angry citizen on the internet is the angry journalism of some leading media who declare scolding, disregard and refusal to communicate to be virtues. A rhetorical brute-force mentality against the enemy on the right is not restricted to the circles of habitual hooligan columnists as der Spiegel routinely employs them. Thus the Berlin Tagesspiegel surprised their readers with a contribution in which they expressly thanked the thuggish packs of so-called Antifa, because with their violent actions they do what they can to make the observance of freedom of speech and the freedom to demonstrate impossible for the political groups whom they declare to be Nazis.

Sympathy for Perpetrators of Violence

In their report on the recent AfD [Alternative für Deutschland] party convention in Stuttgart, Stern deemed it a “form of retributive justice” when violent “Antifa” demonstrators blocked access to the delegates, who then had to make their way through bushes and embankments. The commentary in the Stuttgarter Nachrichten expressed no indignation over such blockades; and considering the numerous attacks on offices and vehicles of the AfD members, they were not incensed about the hazardous publication of the names and addresses of the convention participants. Instead they declared the victims to be perpetrators: Since the first of May traditionally belongs to the unions, so the commentary, it is a deliberate provocation when at that very time a right-wing party holds their party convention; and therefore the AfD is also responsible for the injured police officers.

In Zeit there is a demand for an “emergency law against the mob”; by “mob” they mean participants in a legally sanctioned public protest against an accommodation for immigrants. It is the same authoress who a few years ago in the Berliner Zeitung and the Frankfurter Rundschau called Thilo Sarrazin a “lisping, stuttering, twitching caricature of a man”; [1] and now, under the signet of Zeit, she demands the prohibition of demonstrations, the monitoring of telephones and a stop to “prattling, writing and argumentation”.

“Agitator”, “mob”, “pack”, but also “idiots” and “dimwits” are terms which are no longer the reserve of ranting politicians, but are served up again and again in media texts. In the editorial department of the leftist weekly paper Freitag, published by Jakob Augstein, it is sufficient by their own account to characterise the liberal-conservative monthly magazine Cicero with the insult of “this filthy newspaper”.

The Kölner Stadt-Anzeiger does not demur from allowing space for a sweeping blow when it uniformly imputes to three prestigious German authors the spread of Islamophobia, which they define as nothing other than the “sociably acceptable anti-Semitism” of today. By this manoeuvre they mean to bring into play the eventual, but always required Nazi-rebuke. Spiegel does something similar with the fashioning of its cover photos and places the AfD leader, Frauke Petry, in the pose which they otherwise offer Hitler.

What stands out in these examples is the eschewal of research supported by information and quiet argumentation. Distinctions are already considered as appeasement. A “stance” is what is required, not critical self-monitoring of one’s own perceptions and judgements. Instead of differentiating between conservative, rightist, right-wing populist and right-wing extremist, the entire field of communication, which is beginning to establish itself in opposition to the left-liberal-green juste milieu, is declared a zone of evil to be placed under quarantine. Obviously there is a risk of contagion: whoever is on the Right and conservatively positioned is suspected of being about to take up something worse and disseminate it. The longtime popular catch phrase, “(right-wing) extremism comes out of the middle class”, has abetted this short-circuit.

But now and again when one lets oneself in for a closer contact with “Nazis in pinstriped suits” (referring to the AfD)[2] or with the “bellowing mob” (referring to demonstrators in front of accommodations for asylum seekers),[3] such a person, portrayed journalistically, appears at best as an anxiety-wrought and worry-driven modernisation loser and as a hanger-on of a resentment milieu. That this picture scarcely fits the findings relating to the composition of the protests against Merkel’s policy is of no consequence. Right-wing citizens, so the media image suggests, are somewhere between aliens — who by their haircut, physiognomy and apparel appear as strangers to begin with — and disturbed people, who for all intents and purposes can be approached only with the analytical instruments of the psychiatrist.

When a crew of reporters from the FAZ [Frankfurter Allgemeine Zeitung] visited the home of the husband and wife publishing team, Götz Kubitschek and Ellen Kositza, who seek to fund intellectual right-leaning positions, the event descended into a negative story about domesticity driven by a determined will to denunciation. Arbitrarily selected books in possession of the suspects qualified as proof of their reactionary attitude. And what is completely wicked, the Kubitschek and Kositza household fosters traditional forms of family life.

The terminology used in such stories lacks analytical precision. Above all, the readily used reproach of racism has degenerated today to the level of a ham-fisted, bellicose vocabulary. Accordingly, a writer in the TAZ [Tageszeitung] recently declared:

Racist citizens think that chance, determined by birthplace, has bestowed on them a privileged pass to a greater right to a peaceful life than others.

Here, and also in the Kursbuch 183 (theme: Where to take refuge?)[4], a utopia resounds, which in the form of the new human rights standard demands boundless freedom of movement and settlement for all and sundry. But one can hardly criminalise the resistance to such extreme positions as racist.

It belongs to the paradox of the uncomplicatedly and dominantly fixed universalism, that in the welcoming culture, even the most socio-culturally foreign peoples can count on almost unlimited understanding, while the compatriots who resist that cult and would like to foster traditional ways of life are portrayed as contemporaries hardly capable of integration.

Communication across this abyss scarcely appears possible. How is one supposed to discourse with someone, who, according to die Zeit, wishes “more voices to call more loudly: We don’t want you! Your ‘concerns’ make us want to throw up!”? [This article is available in English.] The conflict is not understood and elaborated as one involving differing political concepts over which one argues their justification, tests their factual claims and critically discusses their basic normative assumptions. Here good stands against evil, the reactionary against those who alone are future-competent. In this way terms function as releasing stimuli, which if they are positioned to the Right, the field of political conflict is blocked immediately and the moral tribunal is called up, which often constitutes only a showplace for denunciative imputations.

Fantasies of exclusion circulate. Thus it was only with half-irony that a writer for die Zeit considered whether Saxons on account of PEGIDA and the like should not be banished from the republic. Satire in the format of the “kill Köppel!” action is likewise to be found.[5] And the TAZ hoped for deliverance from German misery through a speedy Volkstod [Death of the Volk].[6] The prevailing mood is one of a culture war which leaves little room for reasoned political debate. Correspondingly authoritarian is the attitude with which dissent is disparaged. The results of such influential training of public discourse are unpleasant. This conflict situation has been poisoning private relationships for a long time.

This form of political and media communication causes experts in constitutional law to worry that the basic foundations of both the state under the rule of law, and the Constitution, could be shaken. Hence the Cologne political philosopher, Otto Depenheuer, writes as follows in the recently published anthology Der Staat in der Flüchtlingskrise [“The State and the Refugee Crisis”]:

Thus the current era in Germany is marked by a political, palliated rhetoric and by a hyper-morality, which make only narrow, morally surveilled corridors of permissible argumentation available for the relevant and open political discussion of basic constitutional questions. Therefore, political problems become literally unspeakable.

The leftist London weekly paper, New Statesman, sees in the German desire to exclude dissenting opinions from public discourse without coming to terms with them argumentatively, the distinctive mark of a very “constrained and elitist” political system, in which the relationship between representatives and represented is impaired.[7]

However, there are signs of reflection. Thus the publicist Georg Seesslen of the TAZ made a plea for a self-reflective examination of the techniques of one’s own construct of the enemy in the fight against the “monster” of the Right: “Do we not also partake in generating monsters in a way similar to how PEGIDA creates their enemies?” A leading business editor in the FAZ urged that a factual discourse eventually take place with the AfD regarding their suggestions for solving problems. Finally, die Welt rang out recently as follows: “Take the AfD seriously and do not insult the voters”.

The media critic Stefan Niggemeier in his internet service, “Über Medien“, expressed basic doubts about the popularly accepted premise pursued in the media up to now in their handling of the challenge from the Right:

“I do not believe it is the task of journalists to fight the AfD. And if it were, the methods followed up to now have actually been working rather counterproductively.”

If such insights were to make their mark on reporting, the journalistic theatre of rage in Germany would soon come to an end.

8 thoughts on “Journalism in Combat Mode: Agitators, Idiots and Dimwits”